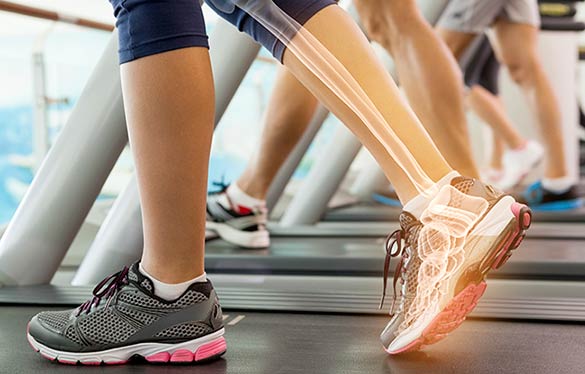 When called upon, all links in the kinetic chain add to the body’s ability to summate forces for acceleration and dissipate forces for deceleration. Having the optimal motion and mobility at each joint allows the body to utilize the architecture of the joint and the soft-tissue structures to the best of their ability.

Ankle mobility is no different. The effects of limited dorsiflexion can be observed in most upright movements with the foot fixed to the ground during locomotion. Because of the ankle’s proximity to the foot and the ground, its function yields a tremendous influence on the structures above on both the ipsilateral and contralateral sides of the body.

Unfortunately, many health and fitness professionals address the challenges of ankle mobility from a very narrow perspective. Improving ankle mobility requires much more than myofascial release of the calves and stretching the calves with the ankle in dorsiflexion in the sagittal plane.

If we consider the bony geometry of the foot and ankle and the continuity of the myofascial tissue at the back of the gastrocnemius and soleus to the metatarsal heads, and cranially with the relationship to the hamstrings, we can see many overlooked opportunities to improve ankle mobility. The foot and ankle consist of a combined 26 bones that make up 33 joints. By involving the complementary motions of these joints and the associated soft tissues that act on them, we can identify an abundance of ways to develop mobility strategies.

The “true” ankle joint is the talocrural joint. This joint is formed by the talus below and the distal ends of the tibia and fibula, which form a mortise, or archway, for the talus to move under. This is the joint where dorsiflexion occurs and where most would target for enhancing ankle mobility.

The subtalar joint is the joint below the true ankle joint and is made up of the talus sitting in the calcaneus. This is where pronation and supination occur. The Achilles tendon wraps around the calcaneus prior to passing to the plantar aspect of the foot and merging with the plantar fascia. 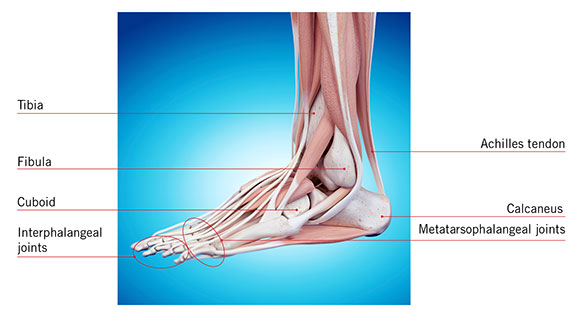 At the knee joint, which the gastrocnemius crosses, the tibiofemoral joint allows for a limited amount of transverse and frontal plane motion along with the much greater flexion and extension motions.

By understanding the involved joints and their available motions, individually and combined with other joints, it becomes clear that the tissue needs to be lengthened along multiple vectors.

The following is a proposed systematic strategy for addressing ankle mobility, with an appreciation for the multiple joints involved and the multiple directions in which the tissue that crosses the ankle joint works.

As previously mentioned, self-myofascial release can be a valuable aspect of soft-tissue mobility anywhere on the body, including the calves. However, because there is continuous myofascial connection from the plantar fascia to the hamstrings, the foot and posterior thigh should be included as well.

Start with the bottom of the foot, using a small ball or series of small balls of varying sizes and densities. Move from the bottom of the foot to the posterior lower leg using a roller. Use a tennis ball or similarly sized ball to target areas of the lower leg with more specificity. For example, you can target the tissue between the lateral gastrocnemius/soleus and the peroneals.

Work your way up to the hamstrings to include all three muscles by rotating the thigh slightly to address the medial and lateral aspects of this muscle group. 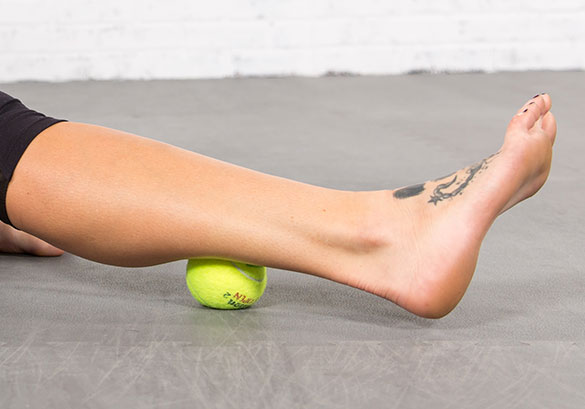 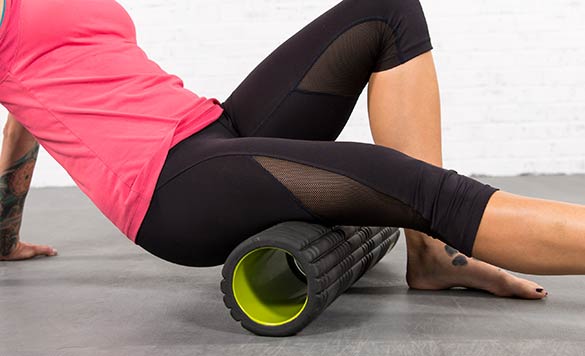 The exact mechanisms behind why self-myofascial release works is still not clear in the literature. However, there are multiple studies that have validated its benefits relating to improved range of motion.

For some individuals, limited dorsiflexion is not a soft-tissue issue, or at least not a soft-tissue issue alone. For some, the ability for the talus to glide smoothing through the mortise is compromised as the tibia and fibula move anteriorly toward the foot. The top of the talar dome may come into contact with the mortise, or motor control issues from injury (e.g., ankle sprain) may interfere with normal timing.

When this is the situation, the client may report of pinching or bunching in the front of the ankle. To help correct this problem, self-mobilization of the ankle joint can be performed using a flat piece of elastic band. Anchor the band behind the client and place his or her foot through the loop made in the tube. Place the tubing across the very bottom of the ankle and over the talus. Create tension on the band by having the client move farther away from the anchor. From there, instruct the client to bend the knee and drive it over the front of the foot into ankle dorsiflexion. As the tibia and fibula move forward over the talus, the tubing pulls the talus back and assists its glide into the mortise. This can be performed for multiple repetitions to assist the articulation of the joint and provide the bony clearance necessary for improved dorsiflexion.

Position a stable object such as a 2- to 3-inch high half-foam roller about 2 feet from a wall. Place the hands on the wall at chest level for stability and place the forefoot of one foot on the object with the heel on the ground to create some initial pre-stretch. To maximize the benefits of the lengthening of all of the involved tissue, hold the toes in extension from the object elevating the forefoot. Keep the involved knee straight in a “soft” extension. Keep this pre-stretch mild to allow for increased motion during the exercise. From this position, have the client perform the following three moves. 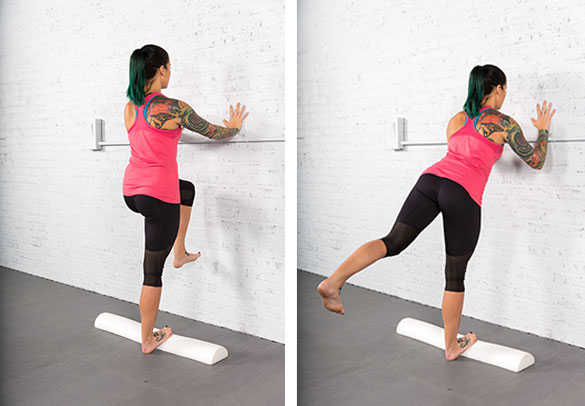 Start with the uninvolved hip and knee flexed to 90 degrees. Reach back with the uninvolved leg and straighten as it passes the other leg. The torso simultaneously hinges forward at the hip, bringing the head and torso closer to the wall. This action of the torso coming forward should increase knee extension of the involved leg and progressively increase the stretch/tension from the calf up into the hamstring. Return to the starting position in a smooth, controlled motion and repeat. Perform this movement continuously for the recommended five to 10 repetitions. 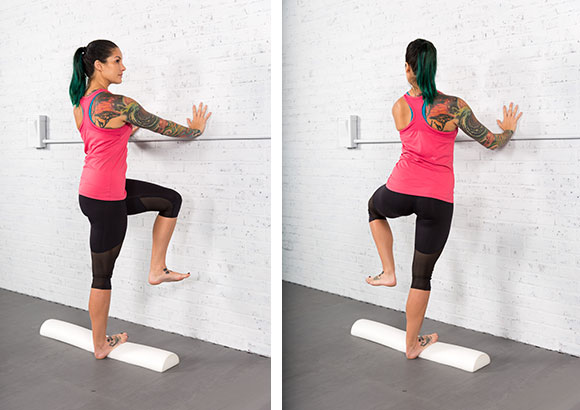 Increase the tension on the involved leg by moving the foot farther up the object and increasing the dorsiflexion. This should produce a moderate level of stretch. The starting position is the same as in Move 1, with the hip and knee of the uninvolved leg flexed to 90 degrees. While maintaining the 90 degrees of hip flexion, bring that limb across the body. The femur of the involved leg rotates slightly in relation to the tibia below, causing the subtalar joint of the involved leg to invert and midtarsal joint to supinate. This creates an additional transverse axis in which the tissue is lengthened.

The uninvolved leg is then brought back across the body and rotated farther from the start position into abduction. This motion creates subtalar joint eversion and midtarsal joint pronation. It also creates another transverse axis—opposite to the previous movement—as the tissue is elongated in a different direction. 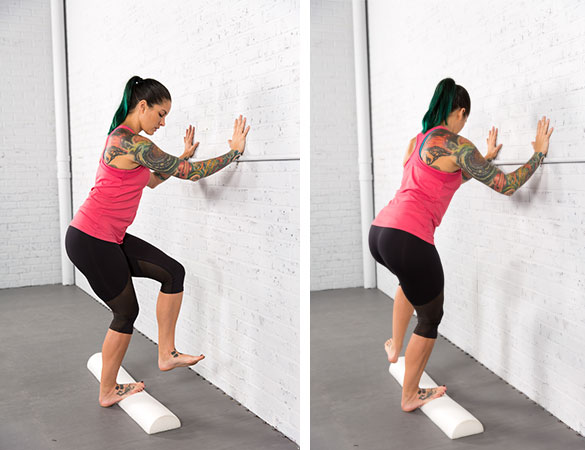 This move is identical to Move 2, except that the involved knee is bent. Flexing the knee in the closed chain has been shown to reduce tension and the length of the gastrocnemius and increase the involvement of the soleus. Clients may report feeling this movement lower and/or deeper in the calf.

Static stretching was not included in this protocol, but not because it does not have value. Studies have shown improvements in ankle flexibility and range of motion as a result of static stretching. It was omitted from this protocol because static stretching, by its nature, makes it more difficult to address the complementary motions of the 33 joints in the foot and ankle.

Ankle and foot mobility are dynamic processes that are not limited to one direction. Therefore, an effective mobility strategy should address as much variability in tissue extensibility as possible. This can be accomplished by applying motion in relation to the multiple joint structures involved.