Study: The Metabolic Benefits of Exercise During Pregnancy 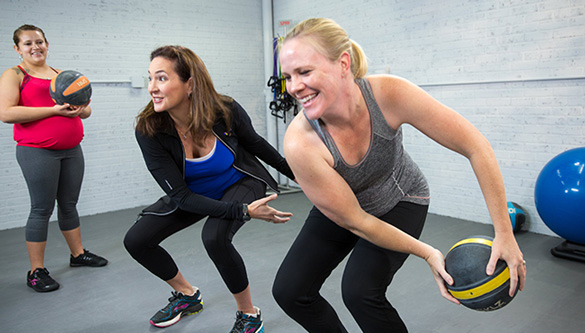 A new study, conducted on mice, shows that exercising during pregnancy improves the metabolic health of the baby, even when the mother has obesity or consumes a high-fat diet. Researchers found that physical exercise by the mother induces the placenta to secrete a key protein called superoxide dismutase 3 (SOD3), which results in a lowered risk of diabetes for the offspring. The findings, which were published in the journal Diabetes, identified the mechanisms behind this process.

Maternal obesity and type 2 diabetes are on the rise. More than 30% of women of childbearing age in Western and Asian countries are classified as having obesity. Meanwhile, 700 million people are expected to be living with type 2 diabetes by 2045. Children born to mothers who have obesity or type 2 diabetes have an increased risk of developing diabetes, even after going on to live healthy lives.

“With the growth of maternal obesity, a worrying cycle is forming where the risk of diabetes gets passed down from generation to generation,” explains assistant professor Joji Kusuyama from Tohoku University’s Interdisciplinary Institute for Frontier Sciences (FRIS), and lead author of the study. “Stopping this cycle is a critical and pressing medical problem.”

Dr. Kusuyama led the study, which was an international effort that included researchers based in Massachusetts, Texas and Japan. Previously, the group showed that exercise during pregnancy has tremendous benefits on an offspring’s metabolic health, demonstrating that placenta-derived SOD3 plays a key role in transmitting the benefits of maternal exercise to the offspring. Building on this, the team set out to understand how SOD3 prevents the negative effects of obesity from being passed from mother to child and found that SOD3 inhibited high fat diet-induced abnormalities in the offspring’s glucose metabolism. While the group’s research, including this study, has largely used animal models, the authors have also looked at SOD3 levels in pregnant women. They found that those who exercised more had higher levels of serum and placental SOD3, particularly during the second trimester of pregnancy.

The Link Between Maternal and Childhood Obesity

The details of this study and its findings are more than a little technical, but it’s worth taking a few minutes to try and understand some of the underlying mechanisms. Histone methylation plays a fundamental role in epigenetic modification, which are heritable changes (transmissible from parent to offspring) to strands of DNA that do not affect the inherited base pairs. A methyl group (-CH3) attaches to an amino acid in the tail of histone proteins that wrap DNA, sometimes activating gene expression, sometimes inhibiting it.

When a mother consumes a diet heavy in fat, the histone H3 trimethylation H3K4me3 gets decreased in the fetal liver and hinders the expression of glucose metabolism genes.

This, the researchers discovered, is caused by two things. Reactive oxygen species (ROS), which is an oxygen-containing molecule that easily reacts with other molecules within a cell and aids the body’s metabolism and cellular functions, becomes elevated. Meanwhile, WDR82, a key protein that regulates histone methyltransferase, becomes oxidative and thus impairs protein functions. In other words, when a woman consumes a high-fat diet during pregnancy, a series of reactions take place that ultimately negatively impact her baby’s metabolism.

But here’s the good news revealed by the study: The harmful effects of a maternal high-fat diet on an offspring’s metabolism are reversed by maternal exercise. The study also highlighted how crucial exercise is for negating these harmful effects, as physical activity is far more effective in producing SOD3 than any efforts to produce it artificially. For example, when the researchers infused N-acetylcysteine (NAC), an antioxidant that boosts performance in the liver, into the fetal liver, it did not reproduce the results of SOD3. This suggests the naturally produced SOD3 from exercise during pregnancy is vital to the offspring’s metabolic well-being.

Given the simplicity and cost-effectiveness of exercise, encouraging mothers to exercise could help reverse the alarming rates of obesity and type 2 diabetes. Additionally, the merits of SOD3 may not be limited to the metabolism, stresses Kusuyama. “There may be wider benefits of this protein on other organs in the child. We are currently looking into the modifications in placenta tissue brought about by SOD3 that may have positive lifelong impacts on children.”

As a health and exercise professional, you are ideally positioned to help your clients during pregnancy (as well as those who plan to become pregnant one day) experience the wide-ranging benefits of physical activity—for both mother and baby. In fact, the latest guidelines issued by the American College of Obstetricians and Gynecologists (ACOG) in 2020 states that, “Women who begin their pregnancy with a healthy lifestyle (e.g., exercise, good nutrition, non-smoking) should be encouraged to maintain those healthy habits. Women who do not have healthy lifestyles should be encouraged to view the prepregnancy period and pregnancy as opportunities to embrace healthier routines.”

In addition to these maternal benefits, exercise during pregnancy also offers a host of benefits to the developing baby. Dr. James F. Clapp, one of the leading researchers in the world of prenatal fitness, has confirmed the following benefits from his decades of research:

Based on the results of this study, improved metabolic health may soon be added to this list. If you are interested in learning more about training prenatal clients, check out the resources in the Expand Your Knowledge box below. Additionally, at the link at the top of this page, ACE Certified Professionals can access a helpful case study demonstrating how to use the ACE Mover Method to encourage exercise consistency in a newly pregnant client.