Whole Body Vibration Training: What Does the Research Show Now? 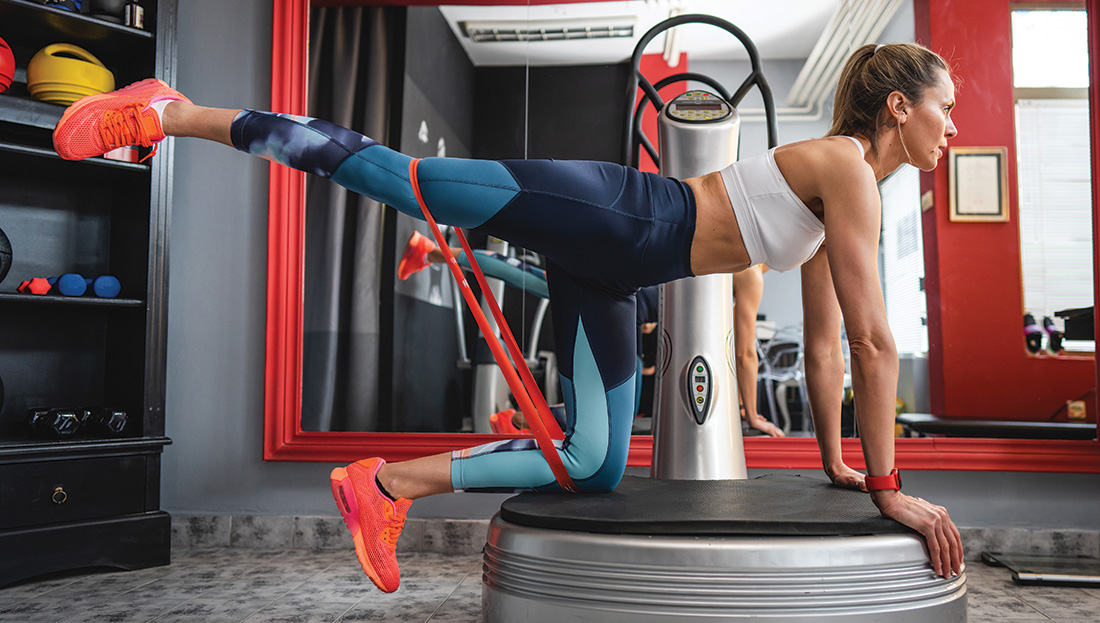 In the early 2000s, I wrote an article for a national consumer magazine on whole-body vibration training (WBVT). At that point, there were only a few studies on this modality, so a sales rep from one of the companies that manufacture the vibrating plates wanted to show me firsthand the effects of vibration training. He came to the gym where I worked, and we asked one of the gym members to participate in a quick demonstration. The member first did a forward reach to test hamstring flexibility; his fingertips could touch his knees. He then stood on the vibrating device for two minutes and immediately following, he repeated the reach test. This time, he could touch his feet.

In the nearly two decades since then, a growing body of research has investigated the merits of WBVT. This article examines the potential benefits of WBVT and who might most benefit from its use.

What is Whole-body Vibration Training?

According to a 2013 review in the Journal of Science and Medicine in Sport, our bodies are exposed to some level of vibrations in everyday life. Riding in a vehicle, for example, exposes the body to vibrations. People in some occupations, such as long-haul truckers or construction workers who operate jackhammers and saws, can be exposed to higher amplitudes and/or duration of vibrations and can suffer negative consequences from such exposure. Even dental workers and barbers can be exposed to more vibration than industry-standardizing organizations recommend. Some of this damage can lead to low-back pain, nerve damage and circulatory disorders.

Despite this evidence, WBVT intentionally exposes the body to vibration via mechanical oscillation. The user stands, sits or exercises on vibrating plates. There are different types of oscillation (e.g., vertical, linear, pivotal, lateral, solenoid) and different amplitudes and frequencies of vibration.

“Whole-body vibration machines that are used for shorter durations at different levels of intensity have not been found to cause serious harm,” says Michele Olson, PhD, senior clinical professor of sport science at Huntingdon College in Montgomery, AL. “Whole-body vibration activities typically involve short exercise periods of about 15 to 30 minutes a day, three to four days a week at typical doses of 5Hz to 60Hz.”

While WBVT is largely believed to be safe, says Olson, and there have been studies on hemodialysis patients, arthritic patients, ICU patients, low-back pain patients, and sarcopenic patients to name a few. There are, however, certain conditions that are prohibitive of this practice. “Those with a pacemaker, those who have a fracture, individuals with hip and knee replacements, and pregnant women are not advised to engage in whole-body vibration training,” advises Olson. “Further, if you have diabetes, kidney stones or have suffered a head injury, do not participate in whole-body vibration training.”

It's important to stay on top of the research regarding WBVT if you’re going to use it as a modality with clients, as studies are mixed or inconclusive with certain conditions, says David Ferrer, PhD, assistant professor of exercise and sport physiology at Plymouth State University in N.H. For example, “One study recommended senility would be a contraindication and would suggest not using WBVT,” explains Ferrer.

If you don’t currently use WBVT with your clients, but want to, do your own due diligence. If a company doesn’t have supporting evidence-based research on its website, it probably hasn’t been used in studies. Given the cost of these devices, you want to get one that will hold up over time and perform the way it’s supposed to—including delivering vibrations at the amplitudes and frequencies that promote results. Your sales package should also include technical support and a warranty.

But a 2018 study in the Journal of Exercise Rehabilitation suggests positive benefits for women diagnosed with senile dementia. Results of this study fall in line with several previous studies that WBVT can improve cognitive function in dementia patients. These study authors feel it’s due to increased blood circulation, including cerebrovascular circulation, that results from WBVT.

While there are definite contraindications to using WBVT, for those without contraindications, it may have some benefits. “There seems to be support for using whole-body vibration training for improving balance and reducing fall risk,” says Ferrer. “In terms of improving lower limb functionality, gait in various populations and standing balance, whole-body vibration training has its merits.”

Ferrer points to a 2017 review and meta-analysis in BMJ Open that suggests WBVT may reduce the fall rate in adults over 50 years of age. These researchers did not, however, find that WBVT increased bone mineral density. Because of this, they felt that the reduced fracture rate was due to fewer falls.

WBVT may also be useful for populations that have difficulty performing more traditional exercises. For example, a 2015 review in the Journal of Musculoskeletal and Neuronal Interactions suggests that WBVT may improve gait speed and standing function in children with cerebral palsy.

“Whole-body vibration training has also been employed among those with a range of issues from fibromyalgia to multiple sclerosis,” says Olson. She cites a 2022 study in Frontiers in Aging Neuroscience that shows WBVT may improve balance function and walking endurance for those with multiple sclerosis. “But the effects of vibration therapy on functional mobility, gait speed, fatigue and quality of life with MS remains unclear,” adds Olson.

A 2019 review in Frontiers in Neurology suggests WBVT may be valuable for improving gait speed and balance in the elderly, as well as for improving walking performance following a stroke and for those with knee osteoarthritis.

In a 2022 randomized single-blinded sham-controlled* intervention study in Biology, researchers evaluated WBVT among women aged 49 to 80, all of whom had chronic low-back pain. The participants were divided into two groups. One group performed aerobic exercises with vibration equipment, while the other (i.e., the control group) performed the same exercises without vibration. After the participants performed the exercises twice a week for 10 weeks, researchers found an increase in lumbar range of motion and a decrease in both pain intensity and erector spinae muscle activity in the vibration-training group. The control group had no significant changes in these areas. (*A sham control has been broadly defined as “a treatment or procedure that is performed as a control and that is similar to, but omits a key therapeutic element of the treatment or procedure under investigation.”)

WBVT may even have some promising potential for people with spinal cord injuries. In a small 2017 study in Neuroscience Letters, researchers used vibration on one leg of each of the participants with spinal cord injury. Their other leg, which received no treatment, served as the control. The researchers were looking for changes in paired-pulse H-reflexes, something that is typically gradually lost within the first year following a spinal cord injury. The loss of this reflex can cause involuntary spasms and spasticity. In this study, the limbs that were trained using vibration showed evidence of a return of the paired-pulse H-reflexes; the control limbs exhibited no changes.

WBVT can be used to improve athletic performance, too. Recruiting 11 elite rhythmic gymnasts as study participants, researchers wanted to know if an exercise program using WBVT would show more short-term performance improvements in flexibility, strength and balance compared to when they performed the same exercises without vibration. The 2014 study, published in Human Movement Science, found that participants showed greater improvement in all strength and flexibility measures, as well as in many of the balance measures, when using WBVT than they did when exercising without it.

In a 2021 PLOS ONE study, researchers found that both male and female bobsled and skeleton athletes who used WBVT significantly improved their sprint times compared to athletes who didn’t use WBVT. And researchers found that WBVT can decrease delayed-onset muscle soreness (DOMS) in elite hockey players following eccentric exercise in a 2021 study in the Journal of Orthopaedic Surgery and Research.

While continued research needs to be done to provide more conclusive evidence, WBVT shows promise in many areas. A 2021 study in Biology suggests more stringent protocols for researchers studying WBVT. Because there are so many variables, including types of platforms using different types of oscillations made by numerous companies, it’s difficult to compare studies. These study authors state that more information needs to accompany their published data so that better comparisons can be made. This will, in turn, help those of us in the field determine which platform might be the best to use with specific populations. In the meantime, consider the research that is currently available, heed the warnings regarding contraindications, and stay curious, always on the lookout for fresh, new research on this topic.