Study: How to Eat and Drink Your Way to Stronger Bones 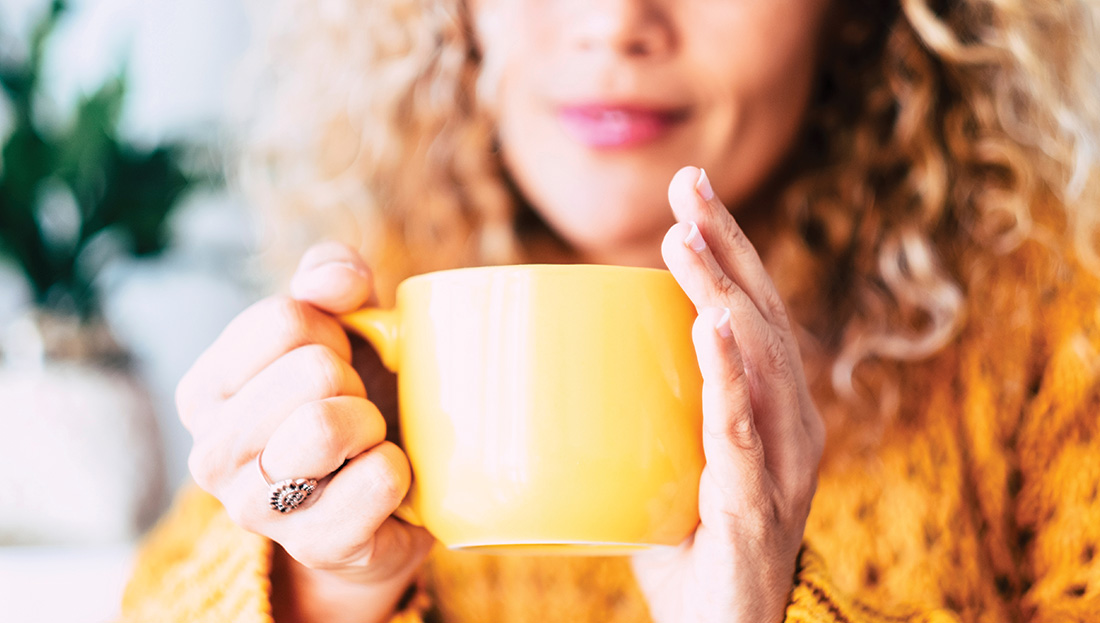 Everyone needs strong bones, but women are particularly prone to developing osteoporosis, especially once they reach menopause. However, a new study suggests that eating more protein and regularly drinking tea or coffee could be a way for women, especially those with underweight, to reduce their risk of suffering a hip fracture.

Specifically, food scientists at the University of Leeds in the United Kingdom found that middle-aged women who increased their protein intake by 25 grams per day experienced, on average, a 14% reduction in their risk of hip fracture. In a surprise twist, they also discovered that every additional cup of tea or coffee they drank was linked with a 4% reduction in risk.

Writing in the journal Clinical Nutrition, the researchers noted that the protective benefits were even greater for women with underweight; a 25-gram-per-day increase in protein reduced their risk of a fracture by 45%.

The protein could come in any form: meat, dairy or eggs. Participants who followed a plant-based diet consumed beans, nuts or legumes. Three to four eggs provide approximately 25 grams of protein, as does a steak or piece of salmon; a 3.5-ounce serving of tofu offers about 17 grams of protein.

The researchers used data from a large observational analysis called the UK Women’s Cohort Study, which recruited women between 1995 and 1998. At the time they entered the study, the women ranged between 35 and 69 years of age. At recruitment, they were asked to fill out questionnaires about their diet and lifestyle. This information was then linked with hospital records over the following two decades, which revealed how many had suffered a hip fracture or had a hip replaced.

Because it was an observational study, the researchers were able to identify associations between factors in diet and health; specifically, they identified associations between standard portions of food and nutrient intakes and hip fracture risk. They could not single out direct cause and effect.

“Across the world, the costs to individuals and societies caused by hip fracture are enormous,” says James Webster, lead study author and a doctoral researcher in the School of Food Science and Nutrition at Leeds. Globally, an estimated 1.6 million people experience a hip fracture each year, a number that is expected to double by 2050. “Hip fracture can often lead to other chronic illnesses, loss of independence and premature death.”

In the United States, hip fracture represents a substantial economic burden to the healthcare system, accounting for nearly 6 billion dollars per year.

The Crucial Role of Diet

“Diet is a factor that people can modify to protect themselves by maintaining healthy bones and muscles,” explains Webster. “This study is one of the first to investigate relationships between food and nutrient intakes and risk of hip fracture, with hip fractures accurately identified through hospital records. The results highlight which aspects of diet may be useful tools in reducing hip fracture risk in women, with evidence of links between higher protein, tea and coffee intakes and a reduced risk.”

Proteins are, of course, the basic building blocks of life and are needed to keep cells, tissues and muscles working properly. They also significantly contribute to bone health.

The recommended protein intake is 0.8 grams per kilogram of body weight per day, a limit some nutritional experts believe is too low. As the study revealed, people who consumed more protein had a lower risk of hip fracture. However, consuming too much protein—greater than 2 to 3 grams of protein per kilogram of body weight per day—can have negative health effects, which is why some experts will not recommend any protein intake above current recommended levels. The study was not able to explore these very high protein intake levels.

“In the UK, most people eat an adequate amount of protein,” explains Dr. Janet Cade, a professor who leads the Nutritional Epidemiology Group at Leeds and supervised the research. “However, certain groups, such as vegetarians or vegans, need to check that their protein intakes are high enough for good health.”

Tea and coffee both contain biologically active compounds called polyphenols and phytoestrogens, which may help to maintain bone health. “This is an interesting finding given that tea and coffee are the UK’s favorite drinks,” says Dr. Cade. Coffee tops the list in the US as well, with tea coming in at the fourth most popular drink, behind bottled water and sodas. “We still need to know more about how these drinks could affect bone health, but it might be through promoting the amount of calcium present in our bones.”

As a health and exercise professional, you’ve likely urged your clients to reduce their consumption of things like processed foods and excessive sugars to help improve their overall health and well-being. If you’ve encouraged them to increase their consumption of something, it’s usually exercise, vegetables, water or fiber. For this reason, clients who are interested in improving the strength of their bones will likely consider the recommendation to increase the amount of coffee, tea or protein they consume to be very good news.

While it is common to consider bone health for older women, bone density can be an issue for women with underweight as well. That’s because women with underweight may be more likely to have reduced bone mineral density and muscle mass. Increasing intakes of several foods and nutrients, especially protein, may help reduce hip fracture risk more in women with underweight than in those with a healthy weight or overweight by helping to establish or restore bone and muscle health. However, the researchers note that this finding needs to be confirmed with further research.

Although it is beyond your scope of practice as a health and exercise professional to recommend specific dietary plans, you can—and should—share findings such as these with your clients. Learning that their morning cup of coffee or afternoon mug of tea can enhance their well-being may alleviate stress or guilt for individuals who might feel as though they should give up these pleasures. Likewise, urging your clients to include some form of protein with each meal and snack is a great way to not only increase their intake, but also to help them feel satisfied longer and avoid blood sugar swings.

Ultimately, what is good for overall health is also good for developing healthy bones. Helping your clients embrace the idea of nourishing themselves—as opposed to depriving themselves—is a great way to improve their diets while also encouraging them to eat and drink things they actually enjoy.