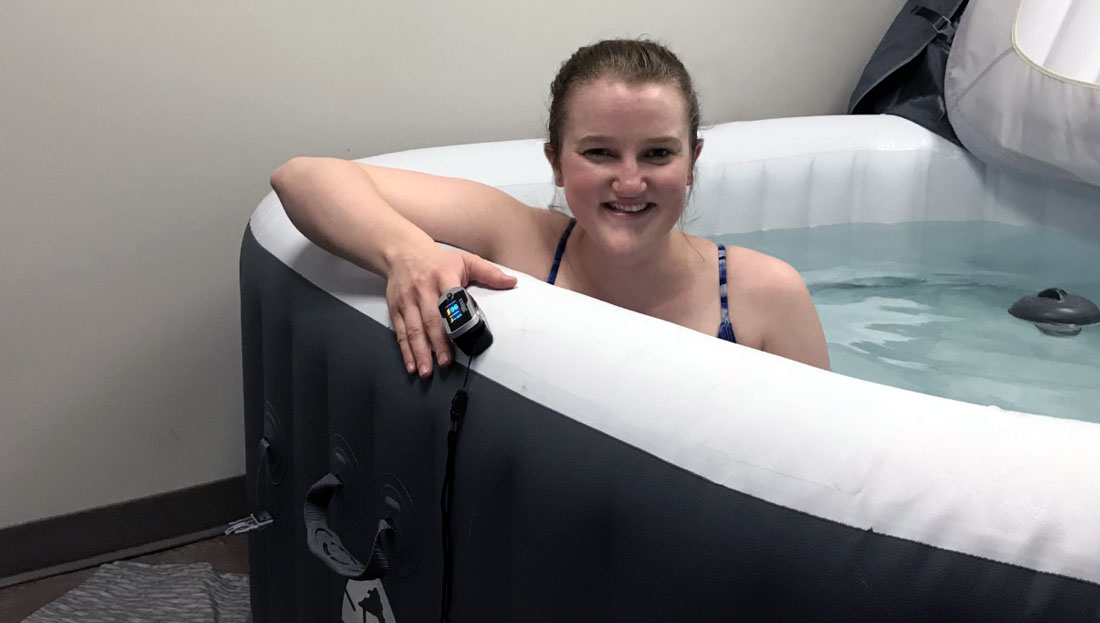 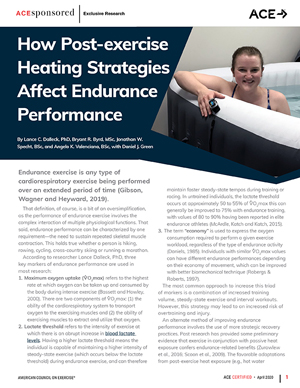 Endurance exercise is any type of cardiorespiratory exercise being performed over an extended period of time (Gibson, Wagner and Heyward, 2019). That definition, of course, is a bit of an oversimplification, as the performance of endurance exercise involves the complex interaction of multiple physiological functions. That said, endurance performance can be characterized by one requirement—the need to sustain repeated skeletal muscle contraction. This holds true whether a person is hiking, rowing, cycling, cross-country skiing or running a marathon.

According to researcher Lance Dalleck, PhD, three key markers of endurance performance are used in most research:

The most common approach to increase this triad of markers is a combination of increased training volume, steady-state exercise and interval workouts. However, this strategy may lead to an increased risk of overtraining and injury.

An alternate method of improving endurance performance involves the use of more strategic recovery practices. Past research has provided some preliminary evidence that exercise in conjunction with passive heat exposure confers endurance-related benefits (Zurawlew et al., 2016; Scoon et al., 2009). The favorable adaptations from post-exercise heat exposure (e.g., hot water immersion) include, but are not limited to, an earlier onset of cutaneous vasodilatation and sweating, increased plasma volume and greater red blood cell mass via upregulation of HIF-1A (Zurawlew, Mee and Walsh, 2018).

The participants for this study were 30 men and women, ages 18 to 50, none of whom had more than one cardiometabolic risk factor (i.e., elevated blood pressure, blood lipids and/or blood glucose).

At baseline and at the end of the study, all participants completed a running economy protocol that consisted of three stages of increasing speed: Stage 1 = 4.6 mph, Stage 2 = 5.0 mph, and Stage 3 = 5.4 mph. They also completed maximal exercise testing to measure VO2max and lactate threshold. Each participant’s first and second ventilatory threshold (VT1 and VT2) were also obtained during maximal exercise testing.

All sessions included a five-minute warm-up and cool-down at a rating of perceived exertion (RPE) of 2 on the 0-to-10 scale. Interval bouts were interspersed with 2.5 minutes of active recovery.

The two non-control groups underwent passive heat recovery after the Monday, Wednesday and Friday workouts. For the hot water immersion group, participants sat in a hot tub (~102° F; 39° C) with only the head above the water surface for 30 minutes. Those in the sauna suit group wore a full-body sauna suit (Kutting Weight hoodie and pants) for 30 minutes.

Importantly, participants ingested core temperature sensors on two occasions during week 1 of the study to ensure the hot water immersion and sauna suit protocols were safe and to identify possible underpinning mechanisms of how these treatments were beneficial to the improvement of VO2max, economy and lactate threshold.

The physical and physiological characteristics of the participants at baseline and after week 3 are presented in Table 2. Note that six participants were unable to complete the study due to issues not related to the study itself, so the results reflect only 24 participants. Overall, there was excellent adherence to the total number of training sessions within all three groups (94% or higher). 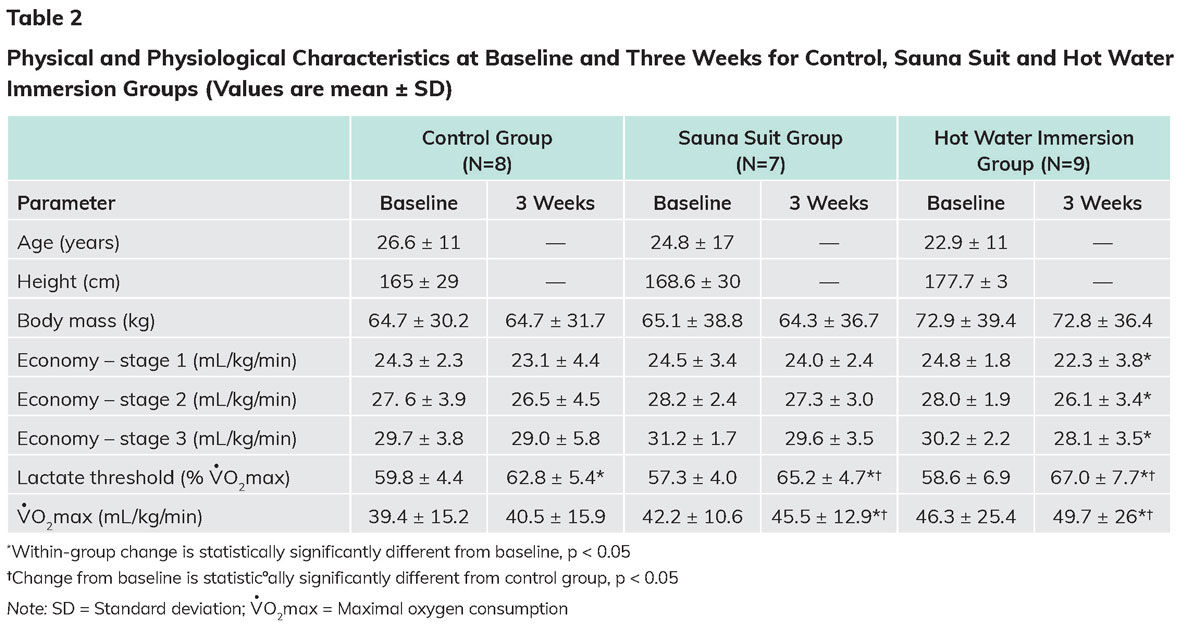 After three weeks, mean VO2max changes and lactate threshold changes in the sauna suit and hot water immersion groups were statistically significantly greater when compared to the control group. Only in the hot water immersion group were there statistically significant improvements in running economy between baseline and three weeks for all three stages.

Incidence of VO2max Responders and Non-responders

The incidence of VO2max responders and non-responders to the exercise program is an important consideration. In the control group, 50% of individuals were categorized as responders, meaning there was a greater than 3.2% change in VO2max. In the sauna suit and hot water immersion groups, 100% of participants were VO2max responders.

Both passive heating strategies were equally sufficient to raise core temperatures, and both stayed below temperatures (102° F; 39° C) that might increase the risk of heat illness.

Based on the results of this study, passive heating strategies (i.e., wearing a sauna suit or using hot water emersion for 30 minutes) following moderate-intensity continuous training while keeping the core body temperature below dangerous levels may lead to statistically significant VO2max and lactate threshold changes.

Exercise professionals should have a fundamental appreciation of the three critical performance-defining physiological parameters discussed in this research—VO2max, lactate threshold and economy—as this will provide a foundation upon which to design comprehensive training programs to optimize endurance performance.

Dalleck says that perhaps the most important element of the finding of this study is the practicality of the post-exercise passive heating approaches, as the improvements in endurance-related parameters were obtained with a minimal investment of additional time and no additional training.

“This strategy allows people to augment their training without adding volume and/or intensity,” Dalleck says. “This means they can achieve performance gains without increasing the risk of overtraining or injury.”

Post-exercise passive heating can also be used to preserve training adaptations if a client is traveling, tapering a periodized program or trying to preserve fitness during an off-season program.

It is important to highlight the fact that researchers do not know if “more is better” when it comes to post-exercise passive heating, so individuals should not go beyond the 30 minutes used in this research in an attempt to make further gains. In addition, they should not go above the temperatures used in this research, as reaching higher core body temperatures can be incredibly dangerous.

Finally, the research team encourages exercise professionals to recommend proper hydration practices. All participants were encouraged to drink plenty of fluids throughout their exercise sessions and while engaging in the post-exercise passive heating protocols to ensure safety from a thermoregulatory standpoint.