How to Design a Lactate Threshold Training Program 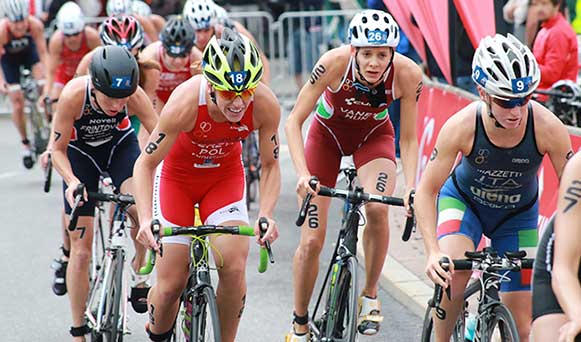 Many of your clients may now be competing recreationally in endurance events, such as mini-triathlons, triathlons, duathlons (running and cycling), half-marathons and marathons. Some clients will seek your training expertise to help them attain the most positive of outcomes. From the research, it is apparent that lactate threshold training is a well-established system to enhance endurance performance. However, before you start designing individual training programs, a few questions must first be answered, such as (1) What are the frequency, intensity, time and type (F.I.T.T) recommendations for lactate threshold training; and (2) How should lactate threshold training be progressed? Questions such as these encourage fitness professionals to use an evidence-based practice to guide program development. Evidence-based practice is the integration of the best research evidence with professional expertise and client values (Straus et al., 2005). This article uses this approach in designing an exercise program that will optimize lactate threshold training.

The lactate threshold is the fastest a person can continuously run, cycle, swim or aerobically exercise in a steady state bout without fatiguing. Increased intensity of training just above the LT results in an abrupt increase in blood lactate levels. At rest and under steady-state exercise conditions, there is a balance between lactate production and removal, as lactate can be used as substrate (fuel) by the heart, liver and muscles (Brooks, 2000). Thus, the LT represents the point at which a disruption begins in the equilibrium between blood lactate production and blood lactate removal. Although actual measurement of the LT is completed with an incremental exercise test in an exercise physiology laboratory, the sidebar at right, “Assessing and Tracking the LT,” presents a validated field test for estimating and tracking improvement in the LT.

Assessing and Tracking the LT

McGehee, Tanner and Hourmar (2005) have validated a user-friendly LT assessment field method with a 30-minute running (or speed walking) exercise bout. Initially, have the client do a five- to 10-minute low-intensity warm-up. Then, have the client run (or speed walk) as fast he or she can for 30 minutes at a 1% grade. The average running speed is deemed the LT (in speed), while the average heart rate (collected every five minutes) during the 30-minute test is the heart rate at LT. Have the client repeat this field test every few months to track progress. Your expectations are that the client will increase his or her running speed while exercising at the same (or similar) heart-rate intensity, thus confirming improvements in LT.

How is lactate produced?

Through the process of glycolysis (which means the splitting of sugar), blood glucose or muscle glycogen is converted to pyruvate, which will either enter the mitochondria (energy factory of the cell) or be converted to lactate, depending on the intensity of exercise. Pyruvate enters the mitochondria at exercise intensity levels below the LT, while at intensity levels above LT the capacity for mitochondrial respiration (the complete breakdown of carbohydrate) is exceeded and pyruvate is converted to lactate. Lactate production should not be viewed as a negative metabolic event, but as a consequence of high-intensity exercise. Also, with this increasing exercise intensity there is a shift toward the recruitment of more fast-twitch muscle fibers, which have metabolic characteristics that are geared toward glycolysis.

How does training affect lactate production?

How does training effect lactate removal?

Although maximal oxygen uptake (VO2max) has been viewed as a key component to success in prolonged exercise activities, most researchers agree that lactate threshold is the best and most consistent predictor of performance in endurance events (Londeree, 1997). When considering the optimal LT training program, the following questions must first be answered:

1. What are the F.I.T.T. recommendations for lactate threshold training?

2. Do these recommendations differ between untrained and trained individuals?

4. How should lactate threshold training be progressed?

Step 2: Where is the best evidence to answer these four questions?

A central pillar of evidence-based practice is to identify and employ the best evidence available to answer the questions pertaining to the optimal LT training program compiled in Step 1. The quality of evidence may range from research findings derived from multiple randomized, controlled studies (the most powerful form of evidence) to those resulting from personal expertise (the least attractive type of evidence). Two review articles published in high-impact factor (highly esteemed via research standards), peer-reviewed publications on the topic of LT training were the primary sources of evidence used to address our questions for this article (Midgley, McNaughton and Jones, 2007; Londeree, 1997). Importantly, review articles summarize findings across a number of scientifically rigorous studies and provide the overall ‘state of knowledge’ on a specific topic.

What are the F.I.T.T. recommendations for lactate threshold training?

The general F.I.T.T. approach to exercise programming used for cardiorespiratory fitness–program design can also be applied to LT programming (American College of Sports Medicine, 2014). Two types of specialized LT workouts identified in the literature include steady-state LT exercise bouts and high-intensity interval training (above the LT) sessions. The F.I.T.T. recommendations for each form of training, along with several modifications, are presented in Tables 1 and 2, respectively. 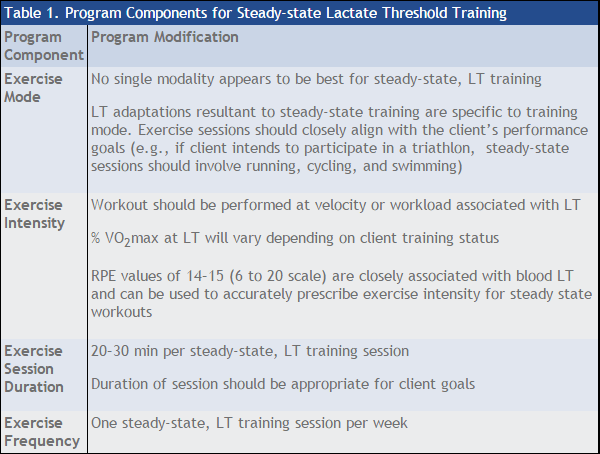 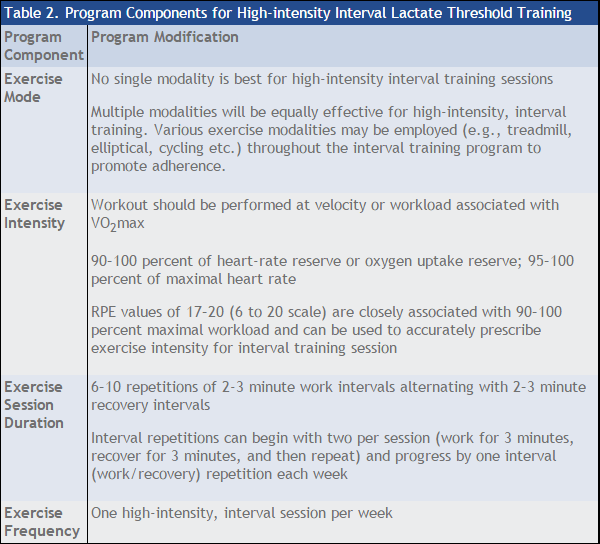 Do these recommendations differ between untrained and trained individuals?

The training status (along with age, body weight and training time) will suggest individual modifications in all aspects of F.I.T.T. with trained versus untrained clients, but the LT approach is the same. Initially, the best way to improve LT levels is to simply increase the client’s training volume (i.e., distance, time and/or frequency) whether their endurance activity involves cycling, using the elliptical crosstrainer or swimming. The premier benefit of increased training volume will be increased capacity for mitochondrial respiration. Training intensity during this phase should fall within the moderate-intensity range recommended by the ACSM of 40 to 60 percent of heart-rate reserve (HRR).

What type of workout best modifies the LT (steady-state or interval)?

Both are critical for the continued improvement of the LT. Importantly, it is the timing for when these specialized workouts should be implemented into a client’s training program. Research has shown that the addition of steady-state workouts performed at LT to an existing aerobic exercise routine in previously active participants results in improved LT levels (Midgley, McNaughton and Jones 2007). For highly endurance–trained clients, or those who have been performing steady-state workouts for some time, interval training sessions must be integrated into training programs to facilitate continued improvement of LT.

How should lactate threshold training be progressed?

A training program designed to optimize LT consists of three components: (1) base-building aerobic training phase; (2) steady-state LT workouts; and (3) high-intensity interval sessions. The increase in training volume should be approximately 10 to 20 percent per week. For example, if an individual is currently running 10 miles per week, the increase in training volume should be 1 to 2 miles per week. Incorporating multiple training modalities (e.g., cycling, elliptical, rowing) into the aerobic exercise routine may also facilitate program adherence. The maximum training volume an individual attains can be best gauged by determining his or her overall capacity and motivation. The base-building phase may last a minimum of two to three months for some individuals.

Following adequate build-up in training volume, the next training period to be addressed is steady-state, continuous LT training. The RPE scale may be the most accurate way to determine training intensity during this aspect of training (recommendations are listed in Table 1). Research has shown that RPE is strongly related to the blood lactate response to exercise regardless of gender, training status, type of exercise being performed or the intensity of training (Weltman, 1995). This is noteworthy, as other methods of monitoring intensity at LT have been known to have serious flaws in methodology, which result in underestimating or overestimating training intensity. Similar to the timeline increase in training volume, steady-state workout sessions can be increased in duration from a starting point of 10 minutes by 10 to 20 percent per week. Evidence suggests that steady-state sessions of 30 minutes in duration are sufficient for optimizing the improvement in LT of most clients during this phase of training (Midgley, McNaughton and Jones, 2007; Londeree, 1997). The progression from 10- to 30-minute steady-state LT workouts may be accomplished gradually over several weeks.

High-intensity interval sessions are the last piece of the LT training puzzle, although these specialized workouts should only be incorporated after first completing a proper base-building phase and steady-state LT workouts. Interval workouts are high-intensity training sessions performed for short durations at velocities or workloads near or at maximal (90 to 100 percent HRR). Evidence suggests that the proper duration of these interval work bouts ranges from two to three minutes, with similar amounts of time for recovery between bouts. Progress gradually with the total number of repetitions (high-intensity bout followed by low-to-moderate intensity recovery bout) completing between five and 10 interval repetitions depending on training status, type of endurance-activity being performed and distance of the endurance activity. The key to successful steady-state and interval training is careful monitoring of intensity to prevent your client from overtraining.

Table 3 is a case study that shows how a LT program can be implemented. 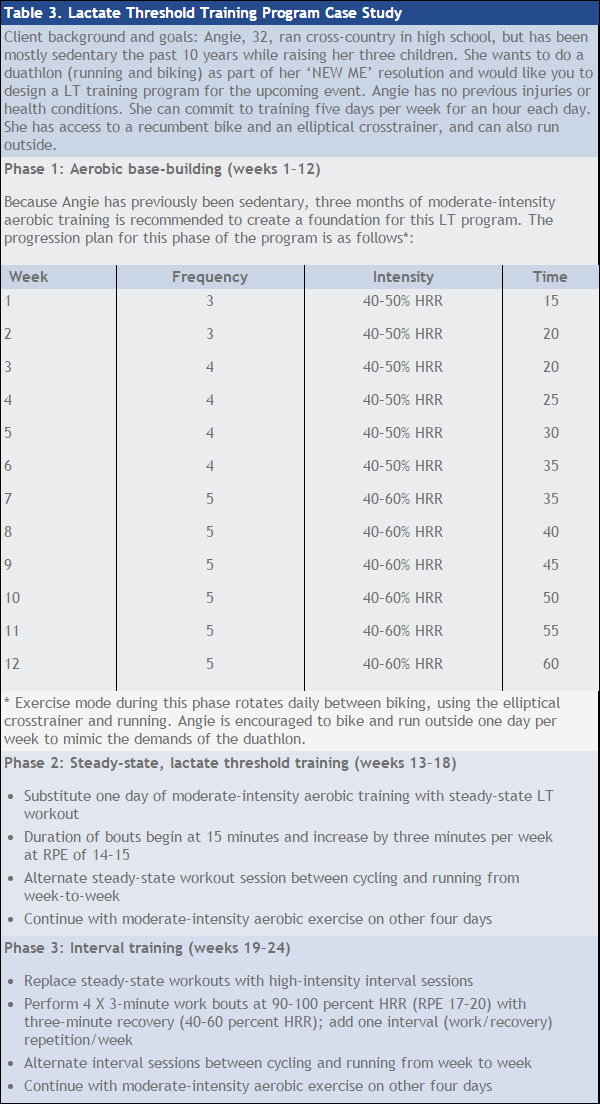 The lactate threshold is the most important determinant of success in endurance-related activities and events. Through an understanding of the physiological mechanisms of lactate production (and its utilization and removal in the body), an effective training program incorporating base training, steady-state LT sessions and interval workouts (above the LT) can be properly devised. Furthermore, individualizing the lactate threshold training program to your client’s fitness level, age, goals and training time will result in the most realistic and triumphant outcome.

Is the Ventilatory Threshold the Same as the Lactate Threshold?

Ventilatory threshold refers to the exercise intensity at which there is a rapid increase in ventilation. The abrupt rise in ventilation coincides with the development of metabolic acidosis, which is characterized by elevated hydrogen ion (H+) concentrations. Expectedly, ventilation rises to dispose of the excess carbon dioxide being produced apart from metabolism through the buffering (or neutralizing effect by the compound bicarbonate) of the increasing H+ concentration. Because increased ventilation occurs with increasing blood H+ concentrations and the associated blood lactate values concentrations, it has been suggested that the ventilatory and lactate thresholds occur at comparable exercise intensities. This interpretation is attractive because determining the ventilatory threshold is non-invasive compared to the lactate threshold. Although some studies have shown similarities between the thresholds, other studies have determined that various conditions, including training status and carbohydrate nutritional supplementation, can cause the thresholds to differ substantially (Robergs and Roberts, 1997).

Holloszy, J.O. and Coyle, E.F. (1984). Adaptations of skeletal muscle to endurance exercise and their metabolic consequences. Journal of Applied Physiology, 56, 4, 831–838.

Midgley, A.W., McNaughton, L.R. and Jones, A.M. (2007). Training to enhance the physiological determinants of long-distance running performance: Can valid recommendations be given to runners and coaches based on current scientific knowledge? Sports Medicine, 37, 10, 857–880.