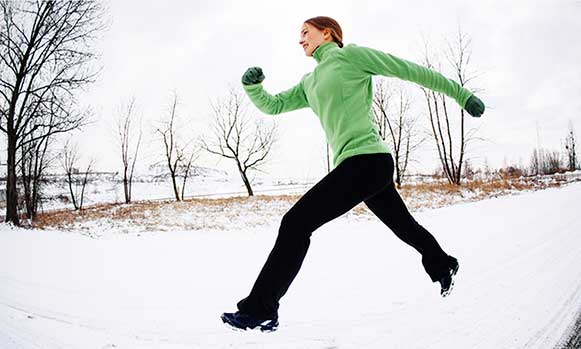 Know someone who overindulged during the holidays? New research suggests a shot of cold air (which is in no short supply in much of the country right now) might help kick-start some extra fat-burning activity for the New Year.

Researchers at UC Berkeley found that exposure to cold temperatures increases levels of a newly discovered protein that is critical for the formation of brown fat, the type of fat in our bodies that generates heat. With extended exposure to chilly air, the protein, called transcription factor Zfp516, also helps the more abundant white fat in our bodies—the kind that stores excess energy—become more similar to brown fat in its ability to burn energy.

The researchers found that mice with boosted levels of the Zfp516 protein gained 30 percent less weight than control mice when both groups were fed a high-fat diet.

The new findings, published online in the journal Molecular Cell, shed light on a type of fat that has drawn increased attention from researchers in the past five years.

“Knowing which proteins regulate brown fat is significant because brown fat is not only important for thermogenesis, but there is evidence that brown fat may also affect metabolism and insulin resistance,” explains principal investigator Hei Sook Sul, UC Berkeley professor of nutritional science and toxicology.

Unlike white fat, which stores excess energy, brown fat burns energy to keep us warm. Brown fat gets its hue from relatively high levels of mitochondria, the cell’s power station. In humans, brown fat was thought to be present only in infants, but stores of it were recently discovered in adults around such vital areas as the heart, brain, neck and spinal cord.

The study authors said that because we generally live our lives in controlled, ambient temperatures, our need for brown fat has decreased over time. 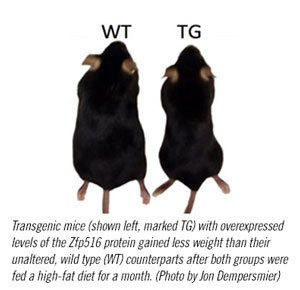 “It has been noted that outdoor workers in northern Finland who are exposed to cold temperatures have a significant amount of brown fat when compared to same-aged indoor workers. But overall, the percentage of brown fat in adults is small compared to white fat,” says Sul. “We also know that people [with obesity] have lower levels of brown fat.”

The UC Berkeley team discovered that the Zfp516 protein activates uncoupling protein 1 (UCP1), found only in the mitochondria of brown fat and involved in the generation of heat.

“The amount of UCP1 produced by brown-like fat cells will be lower than that of classical brown fat, but because 90 percent of the fat in our bodies consists of white fat, finding a way to make that tissue more brown-like could have a significant impact,” explains Sul.

When researchers disabled the gene for Zfp516 in mouse embryos, the embryos did not develop any brown fat. In another experiment, researchers found that mice with higher levels of Zfp516 protein were able to convert more white fat tissue into brown-like fat when exposed to cold air. After four hours in a room kept at 39.2 degrees Fahrenheit (4 degrees Celsius), the body temperature of the mice with the overexpressed Zfp516 protein was, on average, 1.8 degrees Fahrenheit (1 degree Celsius) higher than a control group of mice with normal levels of the protein.

“That difference in body temperature is huge for the mice,” says study co-lead author Jon Dempersmier, a Ph.D. student in nutritional science and toxicology. “The brown-like fat, the kind converted from white fat tissue, is inducible by cold. Classical brown fat, the kind in babies and prevalent in rodents, always has a ton of UCP1 and mitochondria in order to perform thermogenesis.”

The mice with overexpressed Zfp516 protein also gained less weight than their unaltered littermates after both groups ate a high-fat diet for four weeks.

“This suggests that the transgenic mice were protected from diet-induced obesity,” explains Sul. “This protein could become an important target for research into the treatment and prevention of obesity and obesity-related diseases.”

The study authors noted that there’s an active area of research in the relationship between brown fat and diabetes. Higher levels of brown fat are associated with greater sensitivity to insulin. Resistance to insulin leads to type 2 diabetes.

Researchers note that there are many steps between discovering the protein in mice and determining whether it can be useful in humans, but they said that having a clear target is an important development.

“Brown fat is active, using up calories to keep the body warm,” says Dempersmier. “It’ll burn fat, it’ll burn glucose. So the idea is that if we can harness this, we can try to use this in therapy for weight loss and for diabetes.”