The Latest Tools of the Trade: Core Flyte 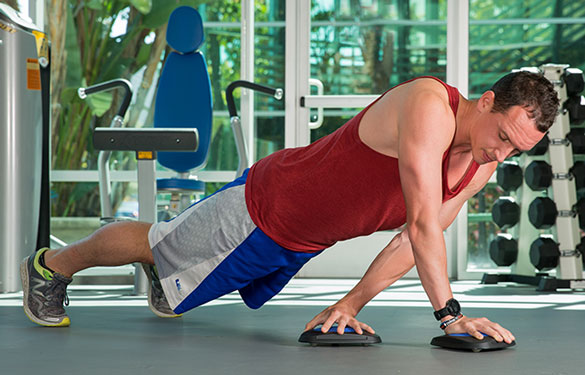 Rolling or wheeled devices designed to train the abdominal muscles are not new; in fact, they have been around for many years. Core Flyte, a new product created by New York City–based personal Trainer Paul Nicholas, takes the basic concept of a wheeled ab-training device and updates it for the 21st century. In this installment of ACE’s Latest Tools of the Trade series, we take a close look at the Core Flyte to determine if it is as functional and effective as the company claims it to be.

Core Flyte inventor Paul Nicholas is an Australian who initially moved to New York City to play rugby and train for boxing. To enhance his performance for his favorite sports, Nicholas looked for a way to develop synergistic strength in the shoulder, upper-back and core muscles. He also noticed that many of his clients were having problems using stability balls because of the distance between the surface of the ball and the floor. Nicholas realized that an object with a lower profile could provide the same low-friction rolling ability of a stability ball, and that it might create the training stimulus he was looking for. That’s how Core Flyte, brought to market in early 2015, was born.

Many wheeled exercise devices feature individual wheels as the primary mechanism for reducing friction. The Core Flyte uses a unique Ball Transfer Unit system, which consists of a larger roller ball resting against a number of smaller ball bearings. The result is a roller system with minimal friction that requires a lot of work from the muscles and elastic connective tissue to control the motion of the product.

King Feliciano is a boxing coach and personal trainer in New York City who frequently uses the Core Flyte with his clients. “In my opinion, it’s the best inexpensive workout product a personal trainer can invest in,” he says. “My clients really appreciate how the Core Flytes can make them work really hard and sweat buckets.”

The first thing you notice about the Core Flyte is the packaging—they did an excellent job of designing and organizing the packaging. When you open the box, you see a clean, professional display of the product (which includes two Core Flytes and retails for $99.95), along with a carrying bag and a how-to poster featuring a variety of exercises. It is clear the company put significant thought into the experience of customers opening the product, which serves to enhance the perceived value for the end user.

Given the fact that there are numerous rolling devices on the market today, we were a little circumspect about whether or not the Core Flyte was very different from other roller products on the market. Overall, we really liked the appearance of the Core Flyte—it features a simple, yet visually appealing design that is extremely intuitive to use. The Core Flyte has a unique triangle shape with padding on the top that creates a perfect placement for either the hands or feet. The main features of the Core Flyte are the three omnidirectional wheels that create an exercise experience that is significantly different than other wheeled products on the market.

Overall, we really liked the Core Flyte—what initially seems like a relatively simple and straight forward product turns out to be an extremely creative and challenging way to do a number body-weight exercises. Used singly or in pairs, the Core Flyte allows the user to move into a number of challenging positions that are perfect for strengthening muscle and connective tissue in a lengthened position. When using the Core Flyte, the type of flooring surface determines the amount of friction between the product and the floor, which, in turn, influences the overall degree of difficulty.

When testing the Core Flytes, we used them on a number of surfaces, including the concrete floor of a home gym, a carpeted floor in a hotel room, the wood floor of a group fitness studio and two different types of rubber gym flooring. There is no question that the surface of the floor makes a significant difference on the amount of resistance that is applied. The texture of the surface affected both the speed of movement and level of intensity. The Core Flyte moved the fastest on cement and wood floors, while the soft tackiness of the rubber gym flooring and the carpeting in the hotel room slowed down the bearings, which resulted in greater control.

One of the most important features of the Core Flytes are their portability—they’re small, lightweight and a great option for trainers who travel to see individual clients or need portable equipment for small-group training programs. This portability also makes it an option worth considering for clients who travel frequently and want an effective way to exercise while away from home. However, the effect that flooring surface has on the usability of the Core Flyte should be considered a primary limiting factor. In other words, we wouldn’t bring this product to a home training session conducted on thick carpet, nor will it work on grass (important for trainers who train clients outdoors). It will, however, work on low-pile commercial carpeting (the kind you find in hotel rooms or business settings) or on harder surfaces such as tennis or basketball courts.

Here are some of the ways you can use the Core Flyte:

To give you a better idea of how the Core Flyte can be used, here is a foundation-level strength-training workout. A client should demonstrate an acceptable level of stability and mobility before progressing to the challenge of using roller equipment like the Core Flyte. This workout can be performed one of two ways: Either do all sets of an exercise with a rest between sets before transitioning to the next movement (called horizontal loading) or perform the workout as a circuit and move from one exercise to the next with minimal rest between each exercise. Rest for two minutes at the end of each complete circuit.

So, is the Core Flyte worth the investment of your time and money? If you are a health and fitness professional who is always looking for new ideas or products that can meet the needs of your clients, you may want to consider the Core Flyte because of its versatility and functionality. However, if you work with a lot of in-home clients who do not have appropriate flooring or if you run outdoor conditioning programs, the Core Flyte might not be the best product for your needs.