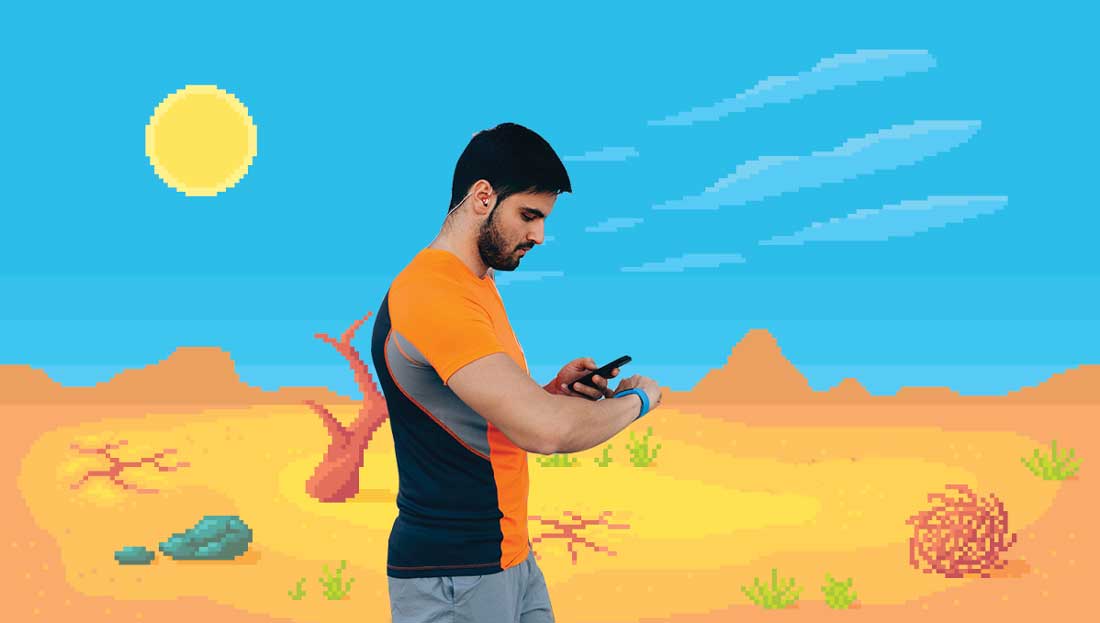 A majority of American adults spend most of their days sitting and don’t get enough exercise, putting them at risk for a variety of chronic diseases ranging from diabetes to cancer.

So, how do you motivate people—your clients—to get up and exercise more? A team of researchers at the University of Iowa (UI) has one potential solution: Turn everyday exercise into a game. To that end, UI faculty and students designed a web-based game that can be played by anyone with a smartphone and a Fitbit.

“We essentially found that people who received the game right out of the gates increased their steps by about 2,200 per day, which is close to walking one mile,” Carr says. “Statistically, that’s significant. It’s also clinically significant.”

The game, called MapTrek, was designed by the Computational Epidemiology Research (CompEpi) Group, a collaborative group of students and faculty in the UI computer science, internal medicine and HHP departments, says Polgreen, whose research involves developing new approaches to monitoring diseases. Recently, that research extended to designing interventions. MapTrek is an example of such an intervention.

Polgreen’s CompEpi group was initially awarded a pilot grant from the Fraternal Order of Eagles Diabetes Research Center at the University of Iowa to develop and test a platform that could monitor activity levels of prediabetic and diabetic patients. The platform also sent text messages to patients encouraging them to set daily activity goals.

“Our results suggested that goal-setting alone was not enough,” Polgreen says. “So, we decided to design a game with challenges and to make the game social. The result is MapTrek.”

Here’s how MapTrek works: Users sync data from accelerometers—in the case of this study, Fitbits—with the web-based MapTrek game. Using Google Maps, MapTrek then moves a virtual avatar along a map in proportion to the number of steps the participant takes. Participants of the study were grouped together and competed against one another in weekly walking challenges each week.

“You can see what place you’re in and see where you are on this map,” Carr says. “Every week, the race changes to a different place in the world—the Appalachian Trail, the Grand Canyon.”

Using Google’s street view function, users can click and see where they are in real time, effectively turning the game into a virtual walk or race through different locations. MapTrek also sends users text messages each day to remind them to wear their Fitbit and also to provide encouragement. Users also could take part in daily challenges to earn bonus steps.

“We tried to make it as enjoyable as possible,” Carr says. “We want people to wear their Fitbit and we want them to participate in these games.”

For the study, 146 participants—sedentary office workers, ages 21 to 65 years who reported sitting at least 75% of their workday—were divided into two groups. Both were given Fitbits, but only one group used their Fitbit along with the MapTrek game. Their activity levels were monitored with the Fitbit’s activity monitor.

Carr says Fitbits were chosen because they’re common and their data was accessible. While they are exploring using other fitness monitors, Carr says MapTrek currently only works with a Fitbit. Fitbit did not contribute to the study.

During the 10-week study, the researchers found that the Fitbit and MapTrek group walked 2,092 more steps per day and completed 11 more active minutes per day compared with the Fitbit-only group. Active minutes are defined as those in which the participant took more than 100 steps.

“If a person can maintain a daily 2,000-step increase, that could result in a clinically significant improvement in their overall health,” Carr says. “It’s associated with about a 10% relative reduction in long-term incidence of cardiovascular disease.”

“Over 10 weeks, the gains in activity declined and the two groups looked similar by the end of the study,” Polgreen says. “But, we are encouraged by the big initial increase in daily steps and are now looking to improve the game in ways that result in longer changes in behavior.”

Polgreen noted that MapTrek, based on the CompEpi group’s original work with subjects at high risk for diabetes, is now also being used as part of a National Institutes of Health–funded study to test its effectiveness within that population. Current MapTrek development is focused on making the game even more engaging and interactive.

Carr says more research will be done on sedentary office workers, but they’re also looking at clinical populations, including cardiac rehab patients and those suffering from chronic obstructive pulmonary disease.

An important aspect of your job as a health and exercise professional is keeping your clients motivated and committed to exercising, not only during their sessions or classes with you, but on their own as well. A growing body of research suggests that activity trackers—from the most basic pedometer to the Apple Watch—can provide much-needed motivation and even competition for those who use them. As this latest study clearly demonstrates, the “gamification” of exercise can go a long way toward helping to boost activity levels—for just about anyone.

“The value of this kind of approach is [that] virtually anyone can play it with minimal risk,” Carr says. “Nearly everyone can benefit from increased levels of activity.”

Of course, not everyone has access to these trackers or to online games. However, you can certainly increase the “fun” factor of exercise by adding competitive elements or games to your workouts and classes. There is no question that enjoyment is a key contributor to exercise adherence, so making sure to create opportunities for your clients and participants to have fun during their workouts is a great way to keep them coming back again and again.