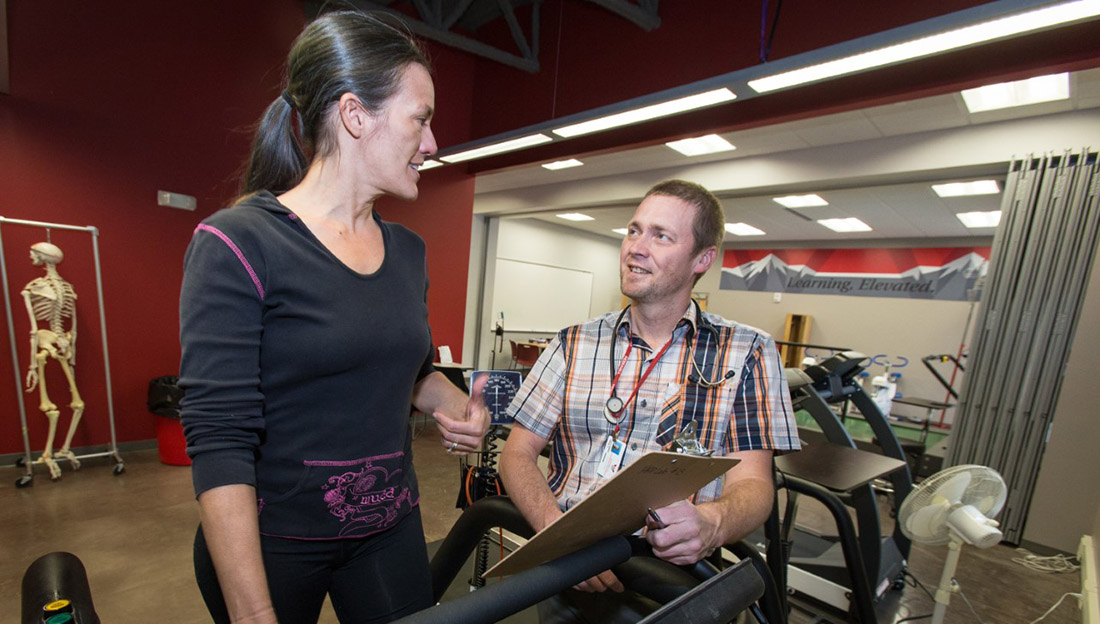 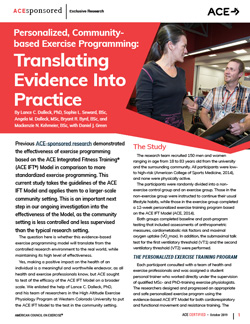 Previous ACE-sponsored research demonstrated the effectiveness of exercise programming based on the ACE Integrated Fitness Training® (ACE IFT®) Model in comparison to more standardized exercise programming. This current study takes the guidelines of the ACE IFT Model and applies them to a larger-scale community setting. This is an important next step in our ongoing investigation into the effectiveness of the Model, as the community setting is less controlled and less supervised than the typical research setting.

The question here is whether this evidence-based exercise programming model will translate from the controlled research environment to the real world, while maintaining its high level of effectiveness.

Yes, making a positive impact on the health of an individual is a meaningful and worthwhile endeavor, as all health and exercise professionals know, but ACE sought to test of the efficacy of the ACE IFT Model on a broader scale. We enlisted the help of Lance C. Dalleck, PhD, and his team of researchers in the High Altitude Exercise Physiology Program at Western Colorado University to put the ACE IFT Model to the test in the community setting.

The research team recruited 150 men and women ranging in age from 18 to 83 years old from the university and the surrounding community. All participants were low- to high-risk (American College of Sports Medicine, 2014), and none were physically active.

Each participant consulted with a team of health and exercise professionals and was assigned a student personal trainer who worked directly under the supervision of qualified MSc- and PhD-training exercise physiologists. The researchers designed and progressed an appropriate and safe personalized exercise program using the evidence-based ACE IFT Model for both cardiorespiratory and functional movement and resistance training. The student personal trainers coached participants during their exercise sessions, provided motivational support, engaged in spotting and corrected exercise technique.

Cardiorespiratory fitness training involved the use of arm, cycle and rowing ergometers; elliptical cross-trainers; and treadmills and was developed based on each participant’s ventilatory thresholds. A target heart rate (HR) was established coinciding with the ventilatory threshold in order to establish a specific intensity for each session.

Members of the research team adjusted workloads during each exercise session to ensure that the participants’ actual HR responses aligned with their target HRs.

Functional movement and resistance training consisted of multijoint/multiplanar exercises using free weights and machines that allowed for free motion. Two sets of 12 repetitions of the following exercises were performed. They began by using 50% of their five-repetition maximum (5-RM) weight load and progressed in 5% increments every two weeks. For exercises that do not include weighted resistance, the number of repetitions performed increased by 5 to 10% every two weeks.

It is important to note that this same training program was used by Dalleck and his team in an earlier ACE-sponsored study, where it was shown to have elicited almost universal training responsiveness and outperformed in almost every metric evaluated as compared to a control group and a group that completed a more traditional training program. There were two major findings from that study: First, an individualized exercise program based on the ACE IFT Model elicited significantly greater improvements in VO2max, muscular fitness and key cardiometabolic risk factors when compared to a standardized exercise program. Second, the ACE IFT Model program increased training responsiveness when compared to the standardized exercise training program.

The physical and physiological characteristics at baseline and after the 12-week program for the non-exercise and exercise groups are presented in Table 1. 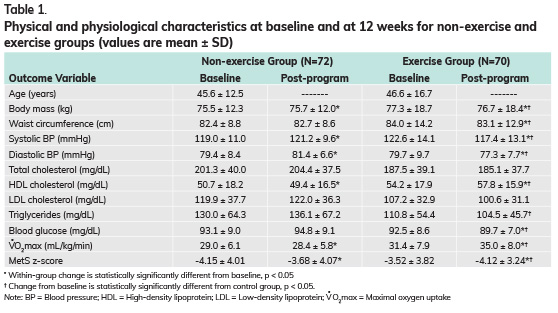 Cardiometabolic health worsened over the course of 12 weeks for those in the non-exercise group, with the exception of some variables that remained unchanged [i.e., waist circumference, total and low-density lipoprotein (LDL) cholesterol, triglycerides and blood glucose].

In contrast, with the exception of total and LDL cholesterol, the changes in the cardiometabolic parameters were statistically significantly favorable in the exercise group over that same period of time. To be more specific, the following variables not only changed favorably in the exercise group, but also were statistically significantly different from the values seen in the non-exercise group: body mass, waist circumference, systolic and diastolic blood pressure, high-density lipoprotein (HDL) cholesterol, triglycerides, blood glucose, VO2max and MetS z-score. 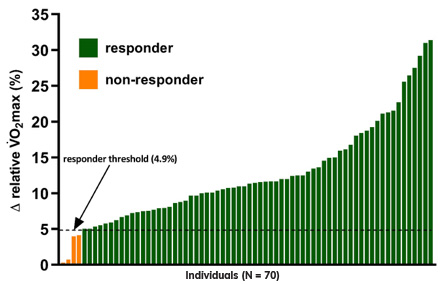 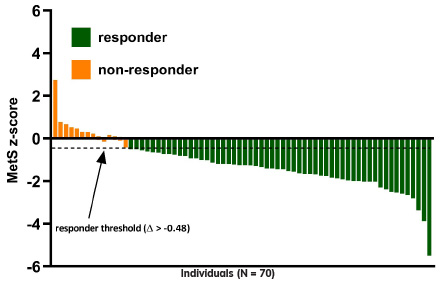 The findings of this research are encouraging and provide insightful data for the translation of personalized exercise programs that will optimize training responsiveness at the community level. As Dr. Dalleck explains, “We had already shown that the ACE IFT Model works on a small scale, but this is the first step in demonstrating the effectiveness of the Model as a means of programming exercise in a community setting. The question now is, how can we ramp up this research to evaluate its effectiveness for hundreds, even thousands of individuals?”

The key moving forward will be to investigate this type of evidence-based, individualized programming in different settings and with various population groups. A renewed focus at the community and population levels aimed at increasing healthy behaviors and physical activity to eliminate cardiometabolic risk factors should be a primary national public health concern (van Dam and Willett, 2009).

A community exercise program has been shown to be an effective method to reduce cardiovascular risk in adults by substantially decreasing the prevalence of metabolic syndrome (MetS) and the elimination of individual MetS components, most notably low HDL-cholesterol and impaired fasting blood glucose (Dalleck et al., 2013). These previous findings and the results of the present study provide experimental support to implement community-wide primary prevention initiatives focusing on increasing personalized exercise to significantly reduce the burden of physical inactivity and its associated comorbidities in the community.

So, what does this mean to you, the health and exercise professional?

Given that ACE’s primary mission is to get people moving, it is paramount that health and exercise professionals have evidence-based programming options available to implement on the individual and community levels. These findings provide further evidence demonstrating that personalized exercise programming based upon the ACE IFT Model can be successfully implemented within the community setting to reduce cardiovascular disease risk.