ACE-SPONSORED RESEARCH: The Effects of Wearing a Cold Vest on Caloric Expenditure 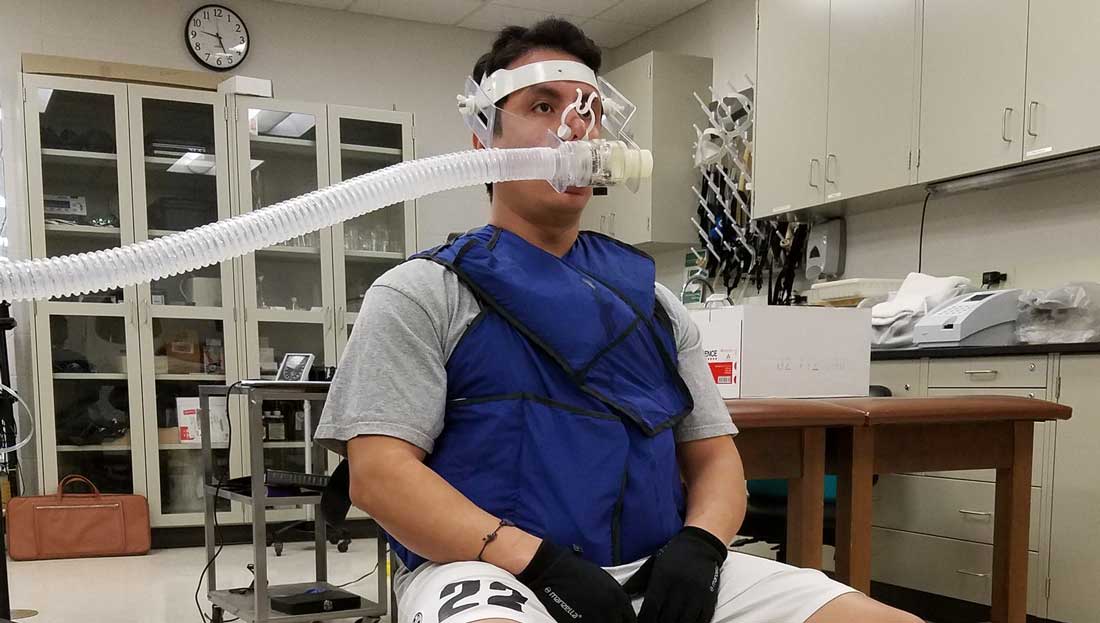 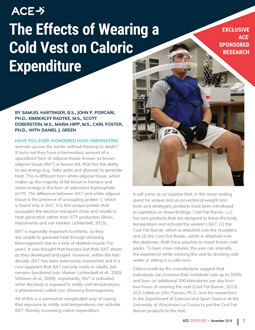 Have you ever wondered how hibernating animals survive the winter without freezing to death? It turns out they have a tremendous amount of a specialized form of adipose tissue, known as brown adipose tissue (BAT) or brown fat, that has the ability to use energy (e.g., fatty acids and glucose) to generate heat. This is different from white adipose tissue, which makes up the majority of fat tissue in humans and stores energy in the form of adenosine triphosphate (ATP). The difference between BAT and white adipose tissue is the presence of uncoupling protein 1, which is found only in BAT. It is this unique protein that uncouples the electron transport chain and results in heat generation rather than ATP production (Boon, Nascimento and van Marken Lichtenbelt, 2015).

BAT is especially important to infants, as they are unable to generate heat through shivering thermogenesis due to a lack of skeletal muscle. For years, it was thought that humans lost their BAT stores as they developed and aged. However, within the last decade, BAT has been extensively researched and it is now apparent that BAT not only exists in adults, but remains functional (van Marken Lichtenbelt et al., 2009; Virtanen et al., 2009). Importantly, BAT is activated when the body is exposed to mildly cold temperatures, a phenomenon called non-shivering thermogenesis.

All of this is a somewhat complicated way of saying that exposure to mildly cold temperatures can activate BAT, thereby increasing caloric expenditure.

It will come as no surprise that, in the never-ending quest for unique and unconventional weight-loss tools and strategies, products have been introduced to capitalize on these findings. Cool Fat Burner, LLC, has two products that are designed to lower the body temperature and activate the wearer’s BAT: (1) the Cool Fat Burner, which is attached over the shoulders, and (2) the Cool Gut Buster, which is attached over the abdomen. Both have pouches to insert frozen cold packs. To burn more calories, the user can intensify the experience while wearing the vest by drinking cold water or sitting in a cold room.

Claims made by the manufacturer suggest that individuals can increase their metabolic rate up to 300% and burn an additional 500 kilocalories per day from two hours of wearing the vest (Cool Fat Burner, 2013). ACE called on John Porcari, Ph.D., and his researchers in the Department of Exercise and Sport Science at the University of Wisconsin–La Crosse to put the Cool Fat Burner products to the test.

The researchers recruited 20 apparently healthy volunteers between the ages of 19 and 25 years old (Table 1). All subjects had a body mass index (BMI) greater than 25 kg/m2, classifying them as either overweight or obese.

The subjects arrived at the testing facility after a 10-hour fast and also abstained from exercise, caffeine and stimulants during that period. During testing, they wore heart rate (HR) monitors and were connected to a metabolic cart that measured and analyzed expired air. They then completed three 30-minute testing phases: (1) resting, (2) low-intensity fat burn and (3) high-intensity fat burn.

It is important to highlight the fact that the terminology used here (low-intensity and high-intensity) has nothing to do with exercise intensity. In fact, this research featured no exercise at all, as subjects were asked to remain still and seated during the duration of testing. The three testing phases, which were conducted in this order, are defined as follows:

Resting = The subjects wore neither the Cool Fat Burner vest nor the Cool Gut Buster and simply sat still for 30 minutes.

Low-intensity = The subjects wore both products (to maximize the benefit) and sat still. They also wore fleece gloves and socks in an attempt to keep the extremities warm.

High-intensity = The subjects wore both products and sat still while wearing the gloves and socks. They also drank 16 ounces of ice-cold water at the beginning of the testing phase and 16 more ounces at the halfway point. 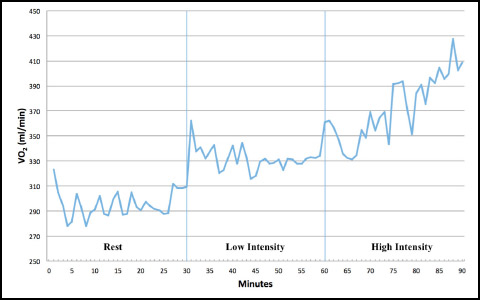 Figure 1. Oxygen consumption during the rest, low- and high-intensity phases. 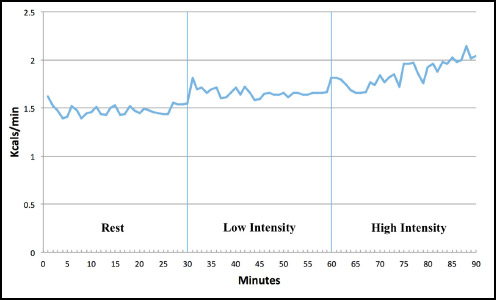 Figure 2. Caloric expenditure during the rest, low- and high-intensity phases. 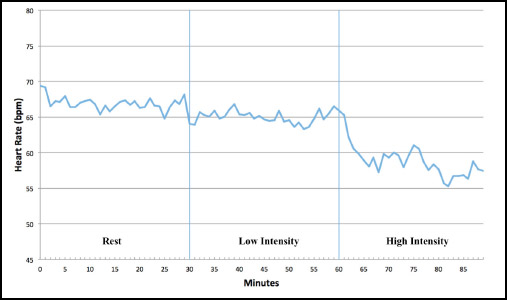 The purpose of this study was to determine if wearing the Cool Fat Burner and Cool Gut Buster could significantly increase caloric expenditure compared to resting metabolic values. For both the low- and high-intensity phases of testing, caloric expenditure was significantly greater than resting conditions (14% and 27% greater than rest, respectively). This amounts to 12.0 and 23.4 kcal increases over resting values in one hour, respectively.

Claims made by the manufacturer suggest that individuals can increase their metabolic rate up to 300% and burn an additional 500 kilocalories per day from two hours of wearing the vest (Cool Fat Burner LLC, 2013). Notably, other manufacturers of similar products make similar claims. When the data from this study are extrapolated to two hours, 24 additional calories would have been expended during the low-intensity phase, and 46.8 calories would have been expended during the high-intensity phase. This second number is still less than 10% of what is suggested by the manufacturer.

“We did not see a meaningful increase in caloric expenditure when wearing the cold vest,” says Dr. Porcari. “People would be better off taking a 10-minute walk, which would burn about the same number of calories and carry with it the many other benefits of physical activity that people won’t get while sitting still in an ice vest.”

Importantly, most participants in this study found wearing the cold vests to be rather uncomfortable, with only a few saying they felt they could learn to tolerate it over time. It is doubtful that many people would find the benefits worth the discomfort.

This product is a great example of a common pitfall among people looking for an easy means of losing weight. As Dr. Porcari explains, the failure comes when “companies take elements of complex human physiology in isolation and try to create a practical application.” It turns out that, on its own, activating brown fat is not enough to significantly impact caloric expenditure.

While this study found an increase in caloric expenditure when wearing the vest, the increase was substantially less than advertised. When looking at possible reasons why the results were different from the manufacturer’s claims, the researchers identified several possibilities, which represent opportunities for further research.

Second, the subjects in this study were not cold acclimated. Cold acclimation results in greater activation of BAT and therefore greater energy expenditure.

Finally, energy expenditure was not recorded after the cold garments were removed. The manufacturer reported an increase of 232% in metabolic rate during the first 15 minutes after the vest was removed (Cool Fat Burner LLC, 2013). The data from this study cannot address that claim.