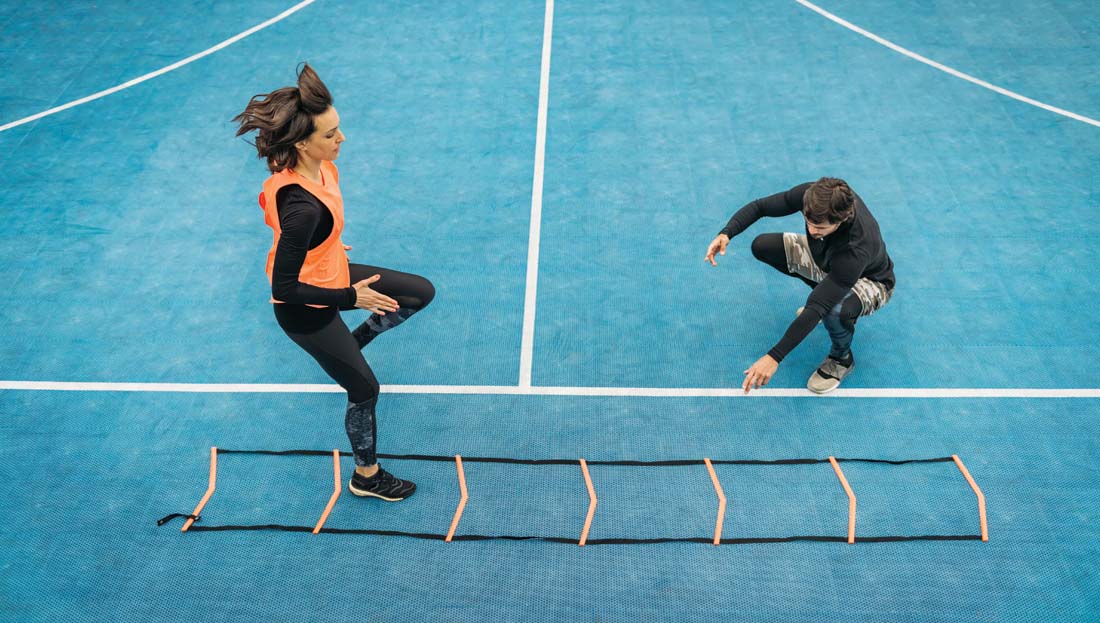 When lacrosse player Samantha Pugh was offered an athletic scholarship to Adelphi University, she knew she was going to have to raise her game—not only on the field, but in the gym as well.

“I was nervous that I wouldn’t be in shape going into my first year,” she explains.

Pugh realized that she had to develop the strength and conditioning expected from a National Collegiate Athletic Association (NCAA)athlete. And she knew just the man to help her: personal trainer Matt Sulam, who at the behest of her parents, had started working with Samantha on her overall fitness, back when she was a middle schooler. Later, as her career in lacrosse took off at Long Island’s Commack High School, Sulam continued to guide her one-on-one workouts. And when she got her athletic scholarship, Sulam was there again, ready to help her prepare for the rigors of high-level competition at Adelphi, an NCAA Division 2 school located in Garden City, N.Y.

“We started doing some more sport-specific things,” Sulam says. “In lacrosse, with its short bursts of activity, you have to be strong and you have to be explosive. The workouts always focused on that.”

The guidance from a familiar and trusted source was much appreciated by the young student-athlete. “I was nervous that I wouldn’t be in shape,” Samantha says. “But he was great about supporting me, not just helping me with the workouts but also just helping make me feel more comfortable going into the college experience.” 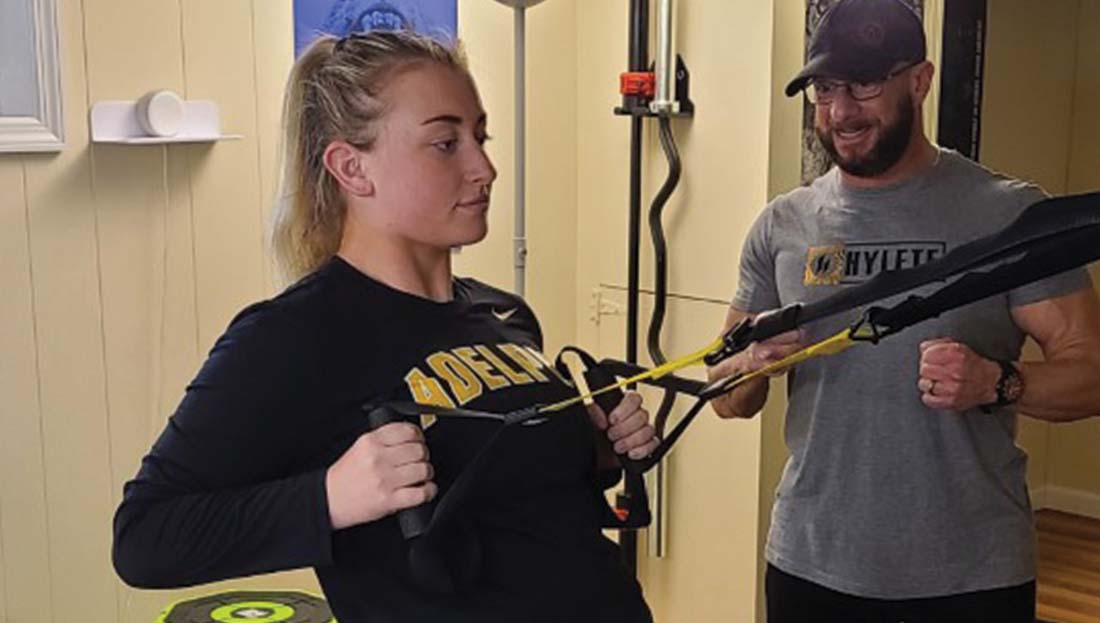 No doubt the close bonds high-quality exercise professionals form with their clients is part of the story here. But what makes the college athlete different from the typical client–trainer relationship is the fact that here, there’s a third party involved—and one just as deeply invested in the success of the workout program as the trainer and the client. That would be the university—specifically the athletic department, where strength and conditioning coaches are charged with developing the sport-specific workouts designed to keep their athletes in peak shape and healthy. In preparing a college athlete for competition, they are the ones who map out the workouts—even if that athlete happens to be your client.

“The strength coach combines the demands and needs of the sport coach into a workout,” explains Scott Bennett, Chief Executive Officer of the Collegiate Strength and Conditioning Coaches Association. “That person is on campus and knows what the demands of practice will be. That’s why they’ve included certain things in the workouts they design.”

Yet, Coach Bennett says, what might seem an inherent conflict of interests or turf battle—between personal trainers hired by the athlete (or their parents) and the strength coach hired by the college to ensure that their athletes are prepared the way they deem fit—can be a complementary and mutually beneficial relationship.

“When it comes down to it, there’s a group of people on campus surrounding these student athletes that want the very best for them, whether it’s the strength coach, athletic trainer, sport psychologist or academic advisor,” says Bennett. While they might not be a member of the university community, the personal trainer can still be a valuable member of that dedicated supporting crew. But, he says, “We all need to be on the same page.”

As head strength coach at the University of Wyoming, University of Southern Mississippi and Marshall University in West Virginia (among others), Bennett has often reached out to an athlete’s personal trainer or performance coach to tailor what he calls the “vanilla” workout he developed for the team  and refocus it on the individual athlete. He’s confident that a majority of ACE Certified Professionals are fully capable of creating these tailored workouts. “I know that many trainers today are very well versed in the techniques of performance training,” he says.

Coach Campbell, who won a bronze medal in the hurdles in the 1988 Olympics, has witnessed the change. “Athletes are becoming so much more sophisticated,” he says. “They know they have a limited window of opportunity and that the next level…the NCAA level…is demanding. So, they’re looking for every advantage.”

A Sea Change in Attitude

As both a coach and administrator, Campbell says he, too, welcomes the input of a certified personal trainer into the mix. And both he and Bennett acknowledge a change in the attitude of their colleagues toward exercise professionals from outside the college community.

“I often hear from an athlete, ‘My trainer said this…,’” says Bennet. “In my younger days, I found that somewhat offensive. But as I began to age, I began to embrace it. Now, I welcome a qualified trainer as part of the athlete’s performance team, along with the strength coach and others.”

The sea change in attitude among veteran strength coaches like Bennet has been noticed by trainers. “I've never had any resistance,” says Jesse Dietrick, CSCS, a strength and conditioning coach and personal trainer at Fitness Quest 10 in San Diego, Calif. “It’s great we can be on the same page. We’re all professionals; we can trust each other.”

That trust must be earned, not only by your client, but by the coaching staff at the college, whose responsibility is the well-being of the athlete. A good way to earn it is to recognize your role, which is not to second-guess or criticize, but rather to help execute the program that the college coach develops, by helping the athlete (your client) perform these movements correctly.

Yet, there are other intangibles you can provide, as well. For example, Sulam not only showed his client, lacrosse player Samantha Pugh, the proper way to do Bulgarian split squats, dumbbell bench presses and other exercises that were recommended to her by the team at Adelphi, but he also provided something else she needed—especially during her first semester: A familiar face (albeit via Zoom), and a broad shoulder to lean on.

Sulam jokes about his role: “I wanted her to have this workout force field around her, that whatever was needed for her to do in the gym, she’d be ready to do it,” he says. But his guidance extended beyond proper technique in the weight room.

“I also play the role of a younger, bearded uncle,” he says, with a laugh. “We meet weekly to go over training, but I also want to make sure she’s eating right, sleeping right and doing well in general.”

For Samantha, currently in her competitive season for lacrosse, her personal trainer has played a big part in her transition to college in general, not just in terms of playing college sports. “I think it’s a huge benefit having him,” she says. “He’s a big help.”

Sulam’s end-of-the-week reminder to the client he proudly refers to as “Samantha Pugh, #13, Adelphi Panthers,” is a reminder of the importance an exercise professional can achieve in a young person's life, much less athletic pursuits.

“I always tell her, ‘Have fun, don’t enjoy college life too much and be ready to work out Monday.”

Do you need to have been a college athlete to train one? “I think it helps, but I don’t think it’s necessary,” says Dietrick. “A lot of athletes need the basics, more than you might think.”

Young athletes also need something else—something that has nothing to do with sports pedigree. “You can be a mentor, you can be someone they turn to for more than their training,” says Dietrick, who was a four-year player and team captain of the hockey team at Ohio's John Carroll University.

Obviously, most trainers are not qualified to be either school psychologists or academic advisors, but that doesn’t mean you can’t play a constructive role in their clients' lives. “They’re turning to you to become a better athlete, but if you can help them become a better person, that’s even more valuable,” says Dietrick. Like Sulam, he also does regular check-ins with the athletes he trains at Fitness Quest 10. “I’ll just hop on Zoom with them and talk about how things are going, how classes are going,” he says.

If you’re looking to expand your business in this direction, how do you find college athletes in your area?

Maybe by…going to the college?

“I don’t think it’s a bad idea to visit your local colleges,” says Dietrick, referencing advice he’s received from Fitness Quest 10 founder Todd Durkin, who has trained countless elite college and professional athletes. “Todd always says ‘Your network is your net worth.’ So, getting to know the AD [Athletic Director] can only help. And if you can develop a relationship with the university and strength coaches, invite them to your gym for a workout or get a cup of coffee together, I think that’s great. Then if one of their athletes needs a trainer, you’re the person they’re thinking of.”

And make no mistake about it: The professionals at the college care about the well-being of your client as much as you do. “Strength coaches today genuinely care about the student athletes,” says Bennett. That means that you and they share a common goal: “To make sure that between the two professionals, you are providing the best training opportunities for that young athlete that you possibly can.”