Study: Can 10 Minutes of Running Lead to Better Mental Health? 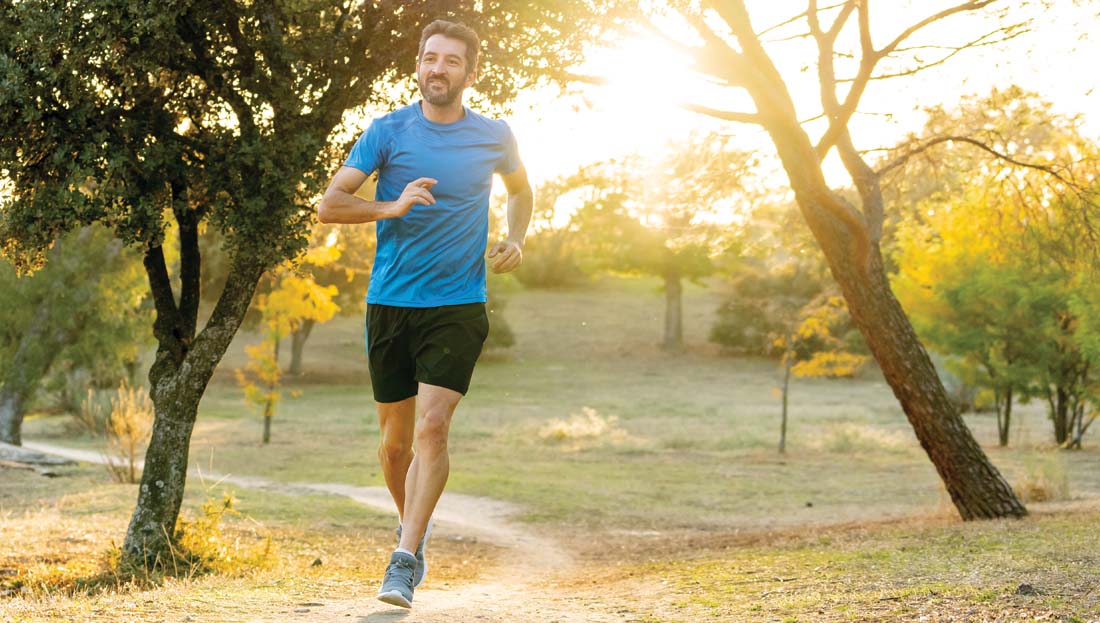 A little bit of running a day may help keep the blues away, according to a new study that showed that increased activation of the bilateral prefrontal cortex accompanies improvements to mood and cognitive function after only a brief bout of moderate-intensity running.

This is particularly good news for those who have experienced increased stress and lower mental well-being in the wake of the COVID-19 pandemic. Researchers from the University of Tsukuba in Japan concluded that only 10 minutes of moderate-intensity running increases local blood flow to the various loci in the bilateral prefrontal cortex—the part of the brain that plays an important role in controlling mood and executive functions. These findings may contribute to the development of a wider range of treatment recommendations to benefit mental health.

There’s clear evidence that physical activity has many benefits, including the ability to improve mood. While previous studies have largely focused on the use of cycling to enhance mood, the researchers for this study chose to examine running because they believe it has long played an important role in the well-being of humans. The unique form and efficiency of human running, which includes the ability to sustain this form of exertion for extended periods of time (i.e., by jogging as opposed to sprinting), and the evolutionary success of humans are closely linked.

Despite this fact, most studies had not yet looked closely at the effects of running on brain regions that control mood and executive functions. “Given the extent of executive control required in coordinating balance, movement and propulsion during running,” explains Professor Hideaki Soya, “it is logical that there would be increased neuronal activation in the prefrontal cortex and that other functions in this region would benefit from this increase in brain resources.”

To test their hypothesis, the research team used the well-established Stroop Color-Word Test and captured data on hemodynamic changes associated with brain activity while participants were engaged in a variety of tasks. For example, in one task, incongruent information was shown; for example, the word red is written in green, and the participant must name the color rather than read out the word. To do so, the brain must process both sets of information and inhibit the extraneous information. The Stroop interference effect was quantified by the difference in response times for this task and those for a simpler version of the task, which involved stating the names of color swatches.

The results demonstrated that, after 10 minutes of moderate-intensity running, participants experienced a significant reduction in Stroop interference effect time. Furthermore, bilateral prefrontal activation significantly increased during the Stroop task. After running, participants also reported being in a better mood. “This was supported by findings of coincident activations in the prefrontal cortical regions involved in mood regulation,” says lead author Chorphaka Damrongthai.

Given that many characteristics of the human prefrontal cortex are uniquely human, this study not only sheds light on the present benefits of running but also on the possible role that these benefits may have played in the evolutionary past of humans.

Psychologists who study health behavior have found that, when people are experiencing negative emotions such as stress, depression, anxiety, anger or sadness, the need to cope with the negative emotion becomes a top priority. The need to feel better now overrides the drive to do something that may lead to future benefits. In other words, if people think a big slice of chocolate cake will help get rid of the depression they are feeling right now, they are likely to eat it, even if they had previously been avoiding desserts to improve their health. If people feel bad, and they think skipping their workout will make them feel better, they will skip the workout, even though they would like to get back in shape. Stress is the most common reason people resume an addiction they had given up, such as smoking or drinking.

As this study shows, a 10-minute jog could be quite effective in helping people feel better and improve their mood. Helping your clients make that connection is essential, particularly because stress is often accompanied by fatigue, which can make exercise feel like an impossible task. (See sidebar, “Behavior Change in Action,” for tips on how to encourage your clients to use exercise to fight both stress and fatigue.). Of course, not all of your clients are able or willing to start running, but you can assure them that participating in any physical activity, even for just 10 minutes, is likely to have a positive impact on their mental health and well-being.

When clients list stress and fatigue as factors contributing to nonadherence to exercise programs, how can you motivate them to exercise? Here are some strategies to encourage your clients to use exercise to fight fatigue and stress: