The Energy Expenditure and Relative Exercise Intensity of POUND® 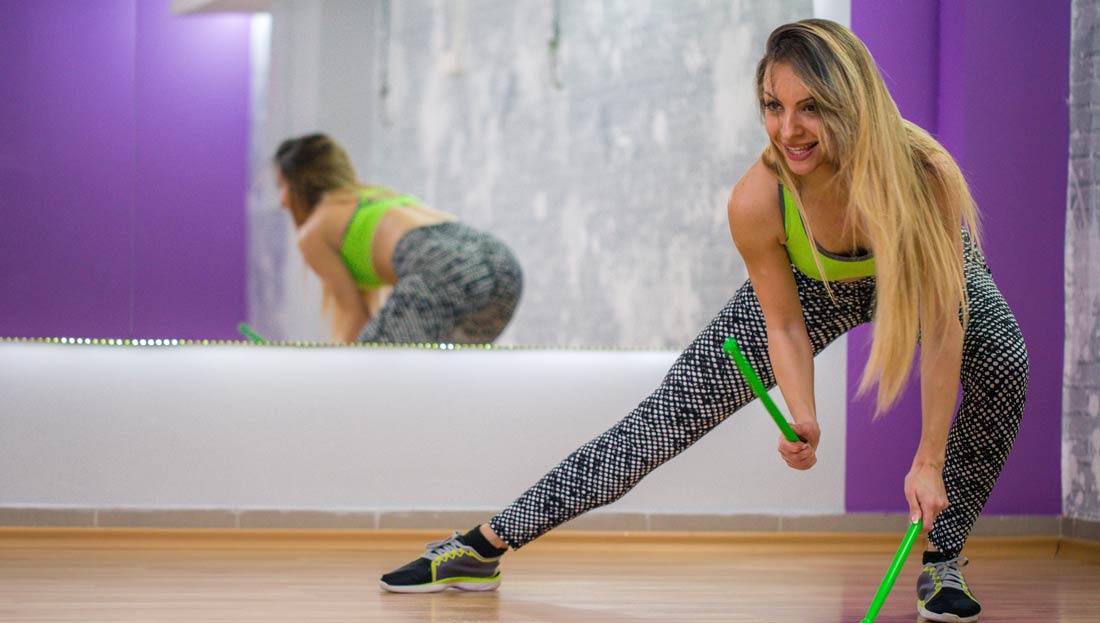 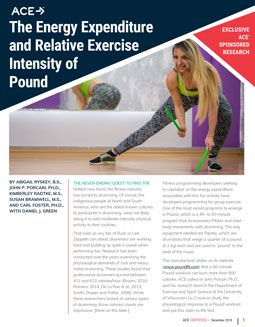 In the never-ending quest to find the hottest new trend, the fitness industry has turned to drumming. Of course, the indigenous people of North and South America, who are the oldest known cultures to participate in drumming, were not likely doing it to add moderate-intensity physical activity to their routines.

That said, as any fan of Rush or Led Zeppelin can attest, drummers are working hard and building up quite a sweat when performing live. Research has been conducted over the years examining the physiological demands of rock and heavy metal drumming. These studies found that professional drummers burned between 412 and 623 calories/hour (Brown, 2016; Romero, 2014; De La Rue et al., 2013; Smith, Draper and Potter, 2008).

Fitness programming developers seeking to capitalize on the energy expenditure associated with this fun activity have developed programming for group exercise. One of the most recent programs to emerge is POUND, which is a 30- to 45-minute program that incorporates total-body exercises and Pilates-inspired movements with drumming. The only equipment needed are Ripstix, exercise drumsticks that weigh a quarter of a pound (0.1 kg) each and are used to “pound” to the beat of the music.

ACE called on John Porcari, PhD, and his research team in the Department of Exercise and Sport Science at the University of Wisconsin–La Crosse to study the physiological response to POUND while exercising to the company's 38-minute at-home DVD workout, released in 2014 as an introduction to the POUND workout.

The researchers recruited 22 apparently healthy male and female volunteers between 18 and 25 years old (Table 1). All were recreationally active, having exercised at least three times weekly for the previous six months. 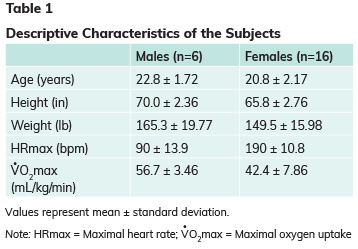 The researchers conducted pilot testing on two subjects to determine if the relationship between heart rate (HR) and oxygen uptake (VO2) during a 38-minute POUND DVD workout was similar to that seen during the Balke treadmill protocol. This is a common investigative technique because if the HR-VO2 relationship of an activity is similar to that seen when exercising on a treadmill, researchers are able to use individually developed regression equations to determine the energy cost of an activity based on the subjects’ HR responses to that activity.

According to Dr. Porcari, HR is artificially elevated during POUND exercise. “Because participants are in a semi-squatting position during much of the class,” says Dr. Porcari, “this produces isometric contractions of the leg muscles, which can disproportionately elevate HR. The gripping of the Ripstix, coupled with the extensive upper-body movement, also contributes to the large increases in HR relative to VO2. Therefore, HR is not a good indicator of how hard participants are actually working during a POUND session.”

Stated simply, while the subjects’ hearts were beating quickly, the subjects were not breathing as heavily as they would be if their HRs were at that same level during traditional cardiorespiratory exercise such as working out on a treadmill.

All subjects completed maximal exercise tests on the treadmill, three 38-minute practice "cardio-jam sessions" with the POUND DVD to get used to the new modality, and then a fourth session of the DVD workout during which data were recorded. The workout was of varying intensities and featured a five-minute dynamic warm-up, 28 minutes of POUND movements and a five-minute cool-down.

In addition to measuring HR and VO2, the researchers assessed each subject’s ratings of perceived exertion (RPE) after the warm-up, every four minutes during the workout and after the cool-down.

The responses to the prerecorded POUND cardio-jam session are represented in Table 2. It was found that HR, percentage of maximal HR (%HRmax), VO2, maximal oxygen uptake (VO2max) and RPE were similar between genders. Peak HR and total calories burned per session were significantly different between males and females. 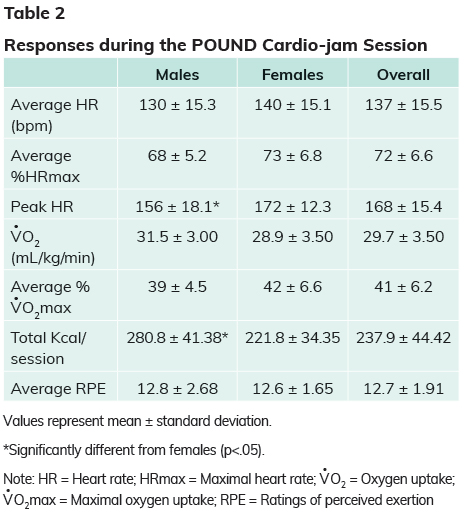 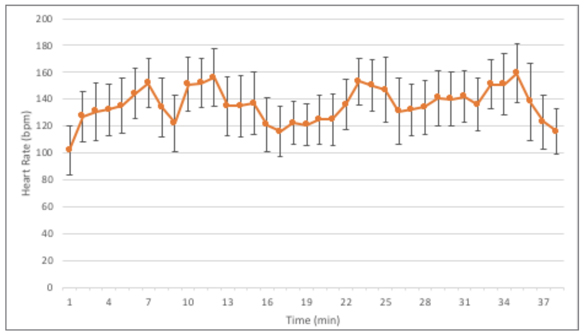 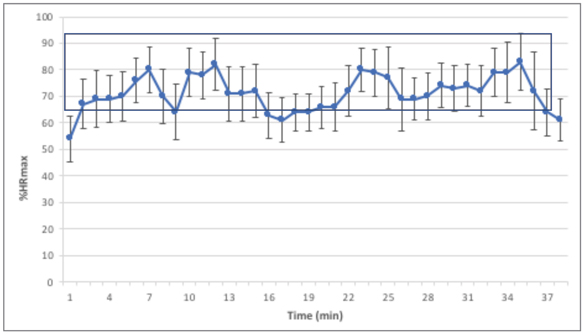 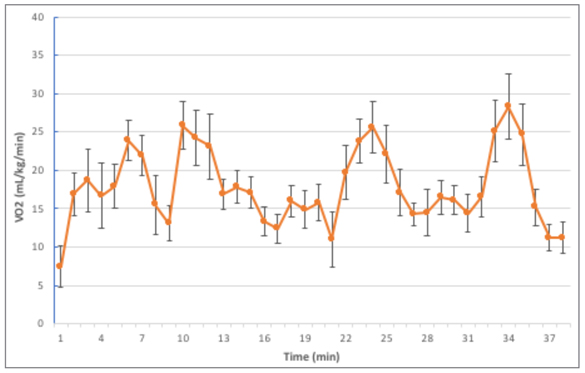 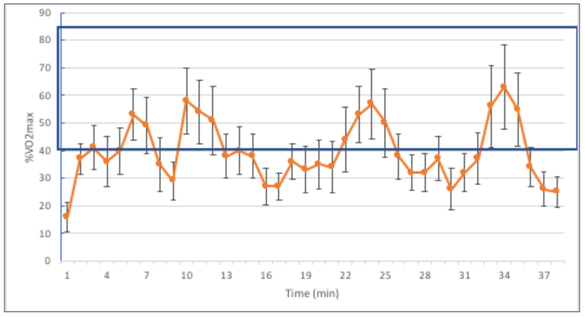 This study also found that subjects burned an average of 238 calories during the 38-minute POUND "cardio-jam session" (women: 221.8 + 34.35 kcal/session; men: 280 + 41.38 kcal/session). Extrapolating the data from the 38-minute workout to a 60-minute workout, approximations for the average calories/hour burned while exercising with POUND's at-home DVD workout was 384 calories/hour for women and 444 calories/hour for men. These caloric-expenditure findings of the current study are consistent with previous research into the physiological demands of rock and heavy-metlal drumming as a form of exercise.

The other method used in the current study to determine relative exercise intensity was the RPE scale. During the 28-minute workout portion of the POUND session, the subjects averaged an RPE of 12.7 + 1.91 on the 6 to 20 scale after being instructed to put forth their "best effort." Participant RPE correlated to a “somewhat hard” workout, which is considered to be moderate-intensity exercise.

The POUND "cardio-jam session" was reported by all participants to be an enjoyable physical-activity option. Caloric expenditure may likely vary from the DVD workout to a live class environment. Based upon the findings of this study, POUND represents a viable alternative to traditional aerobic exercise programs and modalities.

According to Cedric X. Bryant, Ph.D., ACE President and Chief Science Officer, “POUND appears to offer participants an engaging and enjoyable exercise experience, which is essential to promoting long-term adherence.”