Evidence-based Strategies to Help Clients Stay Fit Throughout the Holidays 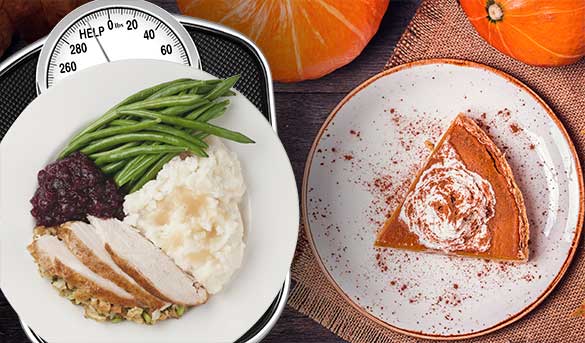 Many Americans gain several pounds or more between Thanksgiving and the New Year. Excess caloric intake, combined with interruptions to the regular exercise routine, can make maintaining fitness a daunting task. In fact, research shows that as little as a one- or two-week interruption to regular exercise coupled with too much sedentary time can quickly result in lost fitness and declines in cardiometabolic health. Fortunately, there are research-substantiated solutions you can offer your clients to ensure they avoid these pitfalls. Here are five evidence-based training strategies your clients can use to avoid detraining and maintain cardiometabolic health and fitness throughout the holiday season.

The Health Implications of Chronic Physical Inactivity and Sedentary Behaviors

There is no question that low levels of physical activity and sedentary behaviors are tied to both morbidity and mortality. While physical inactivity refers to insufficient exercise, sedentary behavior is defined as too much sitting. For example, an individual could be considered active according to the current physical activity guidelines, yet he or she may still spend a lot of time sitting in front of a television or computer (Owen et al., 2011). This is known as the active-coach potato phenomenon. What follows is a brief overview of the evidence highlighting the relationship between physical inactivity, sedentary behaviors and overall health implications.

The Health Implications of Short-term Physical Inactivity and Sedentary Behaviors

It is not uncommon for Americans to be less active and more sedentary during the holiday season, which for most people is comprised of the weeks between Thanksgiving and New Year. Bowl games, parties and shopping can be barriers to the regular exercise routine. Additionally, the cold and snowy weather in many parts of the country make getting outside for activity more challenging. It is therefore not altogether surprising that a recent report found that the average U.S. adult weight increased by approximately 1 percent between Thanksgiving and New Year. Although many Americans perceive this figure as a modest weight gain that can easily be lost within the first few months of the next year, the scientific reality is that the health implications of short-term physical inactivity and sedentary behaviors go far beyond a 1 percent weight gain. Consider the following three realities regarding weight gain and detraining:

1. The cardiometabolic implications of a 1 percent weight gain are widespread and substantial.

The STRRIDE (Studies Targeting Risk Reduction Interventions through Defined Exercise) study was primarily designed to examine the effects of different volumes and intensities of exercise on cardiovascular disease risk factors (Slentz, Houmard and Kraus, 2007). Researchers reported that a 1 percent weight gain occurred with continued physical inactivity. Critically, the 1 percent weight gain was also associated with widespread and concomitant deteriorations in cardiometabolic health, including worsened insulin sensitivity, increased visceral fat and higher atherogenic low-density lipoprotein (LDL) cholesterol concentrations. These findings highlight the more serious implications of modest weight gain beyond the added fat mass. Additionally, the authors pointed out that there is a high percentage of weight regain after weight loss, and that prevention of weight gain in the first place is likely to be a more successful long-term solution.

2. Less than one week of detraining can negate 10 weeks of favorable training adaptations.

A classic study from the early 1990s demonstrated the insidious outcomes from even small interruptions to regular physical activity (Dela et al., 1992). The researchers had a group of men perform 10 weeks of single-leg cycle ergometry at an intensity of 70 percent maximal oxygen uptake (VO2max). This experimental design allowed the untrained leg to serve as the control. After 10 weeks of training there was close to a 25 percent improvement in insulin sensitivity in the trained leg, which corresponds to better blood glucose control. Remarkably, the entire favorable training adaptations were lost after only six days without exercise. These findings demonstrate that some of the improvements in cardiometabolic health from endurance training are short-lived.

The natural aging process is associated with a decline in skeletal muscle mass and simultaneous deteriorations in functional performance (e.g., balance) and muscle strength. This physiological reality makes regular physical activity a must, particularly for older adults. Indeed, there is robust evidence that regular balance and resistance training attenuate the natural decline in functional performance and muscle strength in older adults (Garber et al., 2011). However, there is also scientific evidence to highlight that the gains in each of these important health outcomes are rapidly lost with detraining (Kalapotharakos, Diamantopoulos and Tokmakidis, 2010). For example, people experience a significant decline in functional performance (36 to 70 percent reduction) and muscle strength (60 to 87 percent reduction) within three to six weeks of stopping exercise. Clearly, short-term interruptions to regular exercise training have pronounced implications for older adult health.

Now that you are armed with the information you need to help discourage your clients from letting their health habits slide during the holiday season, here are five evidence-based training strategies to help them avoid detraining and instead maintain their cardiometabolic health and fitness throughout the holiday season.

Training Strategy #1: The minimum dose of activity to maintain weight and cardiometabolic health equates to 1 mile per day.

Practical Recommendation: Encourage your clients to walk a minimum of 1 mile per day throughout the holiday season. Alternative physical activities that yield an energy expenditure equivalent of 100 calories can also be recommended.

High-intensity interval training (HIIT) involves alternating brief bouts (30 seconds to 5 minutes) of higher-intensity exercise with either rest or lower-intensity workloads throughout an exercise routine. Different forms of HIIT have captivated the attention of both researchers and fitness professionals alike due to its superior ability to improve health outcomes for a lesser weekly time commitment relative to the current exercise guidelines for moderate-intensity continuous training. Recently, a group of researchers demonstrated that a very low dose of HIIT, consisting of a single four-minute interval bout at 85 to 95 percent peak heart rate (HRpeak) performed three times per week, was sufficient to significantly improve VO2max and lower blood pressure in a group of individuals with metabolic syndrome (Ramos et al., 2016). Each HIIT session was preceded by a 10-minute warm-up and concluded with a three-minute cool-down. Both the warm-up and cool-down were performed at an intensity of 60 to 70 percent HRpeak.

Practical Recommendation: After you have initially performed pre-participation screening to ensure HIIT is safe, encourage your clients to integrate low-dose HIIT into their holiday exercise routine. The previously mentioned findings demonstrate that a small time investment of 17 minutes per day for three days per week can elicit important cardiometabolic health gains. Each 17-minute HIIT session should consist of a warm-up (10 minutes at 60 to 70 percent HRpeak), a 1- x 4-minute interval bout (85 to 95 percent HRpeak), and a three-minute cool-down (60 to 70 percent HRpeak).

According to recent data, more than one-third (35.3 percent) of U.S. adults have prediabetes. People with prediabetes have a two- to sixfold increased risk of developing type 2 diabetes in their lifetimes. Moreover, individuals with type 2 diabetes have a life expectancy, on average, that is 10 years shorter than their counterparts without type 2 diabetes. Prediabetes is underpinned by impaired blood glucose and poor insulin sensitivity. Earlier we highlighted that both of these physiological markers worsen considerably with even brief periods of inactivity (i.e., less than one week). Arguably, the single best workout to augment insulin sensitivity and improve blood glucose control is a prolonged bout of exercise that decreases muscle glycogen stores. For example, Schenk and Horowitz (2007) saw a whopping 25 percent improvement in insulin sensitivity among study participants following a single 90-minute moderate-intensity (65 to 75 percent HRpeak) exercise session.

Practical Recommendation: Given the acknowledged time constraints of the holiday season, don’t tell clients they should regularly be performing longer sessions of exercise training. However, the potent cardiometabolic training benefits of a prolonged exercise bout coupled with the high prevalence of prediabetes in American adults justify periodically carving out the necessary time for this extended training session. Therefore, a more sensible approach is to urge clients to perform one extended session of moderate-intensity (65 to 75 percent HRpeak) physical activity every two weeks.

As established earlier, too much sedentary behavior is equally hazardous to one’s health as physical inactivity. In fact, total sedentary time was consistently associated with various unfavorable cardiometabolic biomarkers [e.g., insulin resistance, low high-density lipoprotein (HDL) cholesterol and elevated blood triglycerides] even after adjusting for physical activity time (Brocklebank et al., 2015). Other studies have shown that people should take breaks from sedentary behaviors every hour, and that the breaks should last at least five minutes and consist of light-intensity activities [less than 25 to 50 percent VO2max or 1.5 to 3.0 metabolic equivalents or (METs)] (Owen et al., 2011; Hamilton et al., 2008). Following these guidelines has been associated with decreased metabolic risk (Healy et al., 2008).

Practical Recommendation: The fact that sedentary behavior and physical inactivity are two distinct health domains has important ramifications. If clients are to maintain optimal cardiometabolic health throughout the holidays, offer them the guidelines presented in Table 1 to help them intentionally reduce their sedentary behaviors. 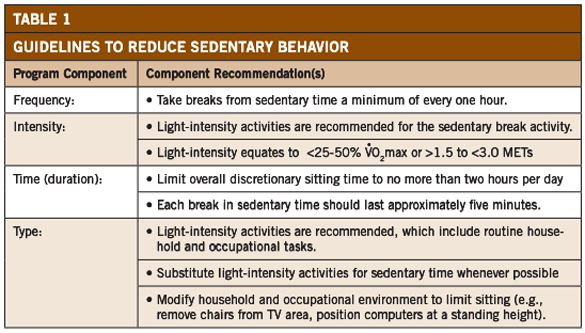 Training strategy #5: Combined aerobic and resistance training is an antidote to detraining.

Resources to Help Your Clients Survive the Holidays

These ACE blogs are great resources to share with your clients as they head into the holiday season:

10 Health Tips for Surviving the Holidays 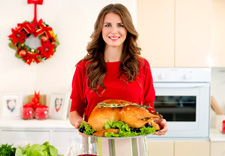 How to Throw a Fit and Healthy Holiday Party

While the best option is to consistently avoid inactivity and sedentary behaviors altogether, some degree of physical inactivity and sedentary behavior is inevitable. With this in mind, try to design your clients’ exercise training programs in advance of interruptions to regular activity in a manner that attenuates the rate of detraining. Recent research demonstrated that combined aerobic and resistance training resulted in numerous favorable effects (e.g., body composition, muscle strength and lipid profile) that persisted for longer following training cessation when compared with either aerobic or resistance training alone (Theodorou et al., 2016).

Practical Recommendation: Despite your clients’ best intentions, it may prove difficult for them to avoid some degree of physical inactivity and sedentary behaviors throughout the holiday season. A final training strategy to employ falls within the category of prevention. Combined aerobic and resistance training throughout the year can serve as an antidote and better prepare clients for the holidays when periodic interruptions to the regular activity become unavoidable.

Hamilton, M.T. et al. (2008). Too little exercise and too much sitting: Inactivity physiology and the need for new recommendations on sedentary behavior. Current Cardiovascular Risk Reports, 2, 292-298.