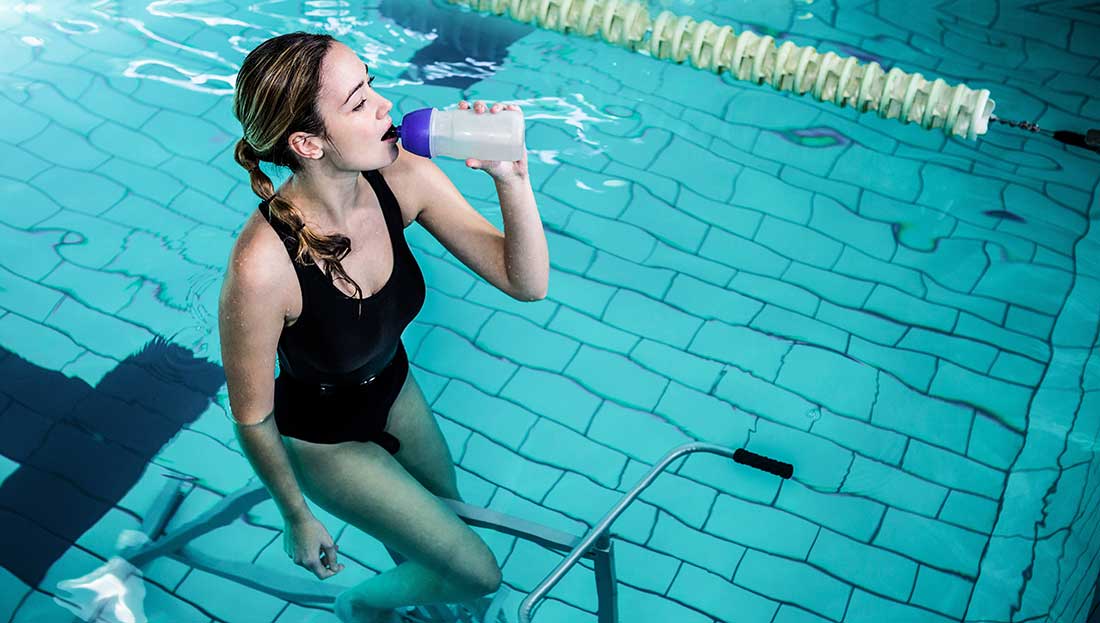 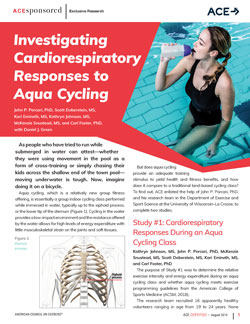 As people who have tried to run while submerged in water can attest—whether they were using movement in the pool as a form of cross-training or simply chasing their kids across the shallow end of the town pool—moving underwater is tough. Now, imagine doing it on a bicycle.

Aqua cycling, which is a relatively new group fitness offering, is essentially a group indoor cycling class performed while immersed in water, typically up to the xiphoid process, or the lower tip of the sternum (Figure 1). Cycling in the water provides a low-impact environment and the resistance offered by the water allows for high levels of energy expenditure with little musculoskeletal strain on the joints and soft tissues. 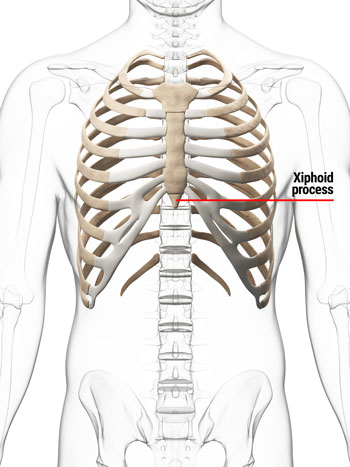 But does aqua cycling provide an adequate training stimulus to yield health and fitness benefits, and how does it compare to a traditional land-based cycling class? To find out, ACE enlisted the help of John P. Porcari, PhD, and his research team in the Department of Exercise and Sport Science at the University of Wisconsin–La Crosse, to complete two studies.

The purpose of Study #1 was to determine the relative exercise intensity and energy expenditure during an aqua cycling class and whether aqua cycling meets exercise programming guidelines from the American College of Sports Medicine (ACSM, 2018).

The research team recruited 16 apparently healthy volunteers ranging in age from 19 to 24 years. None of the subjects had musculoskeletal or cardiovascular problems that would have been exacerbated while immersed in water or prevented them from exercising at various intensities (Table 1). 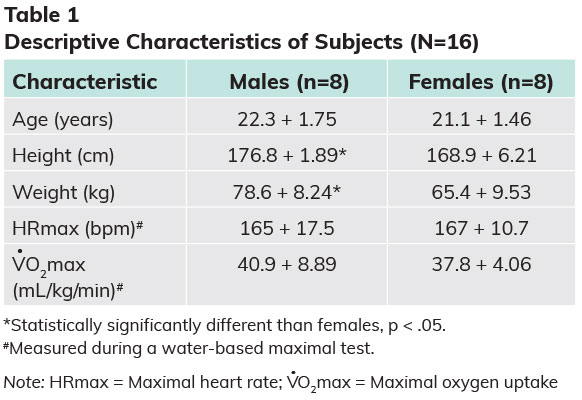 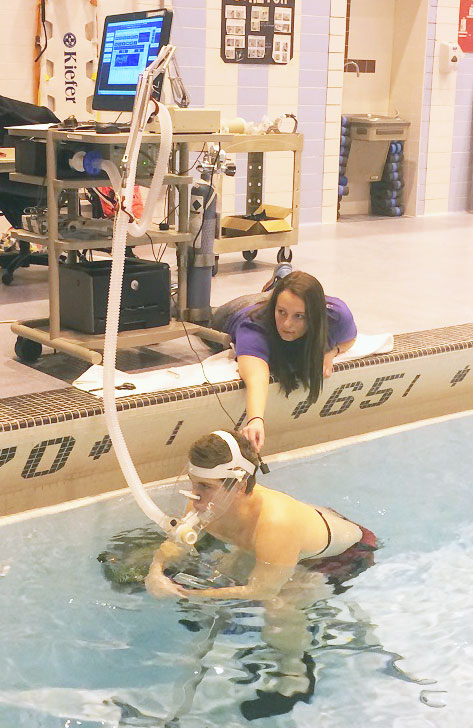 The subjects practiced cycling and performing various exercises using the Hydrorider Professional Bike to familiarize themselves with aqua cycling until the research team deemed them proficient. Prior to the workout, seat height was adjusted for each subject so that he or she was submerged to the xiphoid process. Each subject then sat quietly on the bike in the water for 10 minutes to determine resting heart rate (RHR).

Next, the subjects completed a workout by following along to a prerecorded DVD of an aqua cycling class played on a computer screen placed on the edge of the pool deck. The class was 50 minutes long, including a five-minute warm-up and a five-minute cool-down. The 40-minute workout portion consisted of the following:

Upbeat music, similar to what is played in a typical land-based cycling class, was played throughout the workout and the subjects were given encouragement periodically, especially during the more difficult portions of the workout. Heart rate (HR) and oxygen uptake (VO2) were measured continuously and ratings of perceived exertion (RPE) were assessed at the end of each section of the workout using the 6 to 20 scale. Energy expenditure was calculated from the VO2 data assuming a constant of 5 kcal per liter of oxygen consumed; percentage of heart-rate reserve (HRR) was calculated using the subject’s RHR that was determined in the water. Percentage of oxygen uptake reserve (VO2R) was also calculated using a resting VO2 of 3.5 mL/kg/min for all participants. 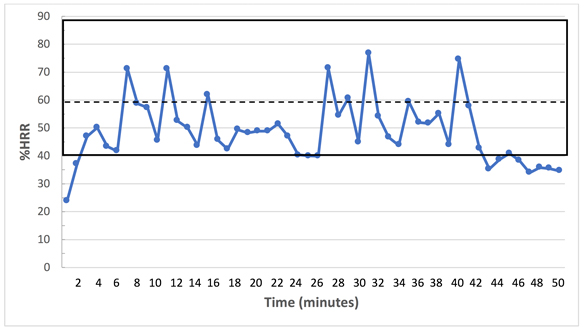 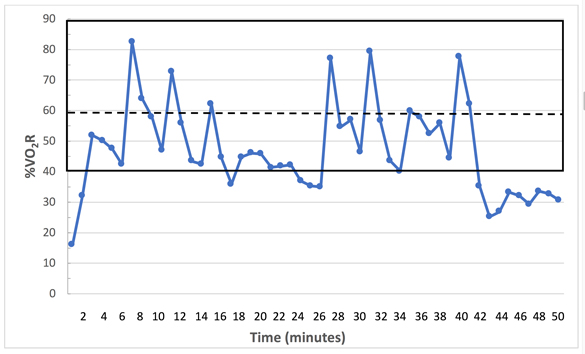 Study #2: A Comparison of Cardiorespiratory Responses to Aquatic vs. Land Cycling

The purpose of Study #2 was to compare submaximal and maximal HR and VO2 between land- and water-based exercise, as well as their impact on calculated relative intensities.

For this study, the research team recruited 16 healthy college students between the ages of 19 and 24. None of the participants had any cardiovascular or orthopedic contraindications to exercise (Table 2).

Before the water-based text, subjects completed a practice session to become accustomed to cycling on a Hydrorider Professional Bike while submerged to the xiphoid process. RHR was obtained after the subjects sat quietly on the bike while in the water for 10 minutes. The test began at 50 rpm and increased by 3 rpm per minute until the subject reached volitional fatigue. Pilot testing found that this protocol resulted in a similar timeframe as the land-based test.

In aqua cycling, resistance is increased by lengthening the scoop of the flywheel. The Hydrorider has three resistance settings and the hardest setting was used for all subjects.

For both tests, VO2 was measured continuously and HR was measured each minute. Ratings of perceived exertion were recorded every minute using the 6 to 20 scale.

To compare the results of the two tests, HR and VO2 were extrapolated to RPE levels of 11, 13 and 15 using individual linear regression equations derived from the respective maximal tests (Table 3). As you can see, for these absolute values (i.e., HR, HRmax, VO2 and VO2max), the values were statistically significantly greater on land than in the water. During both tests, HR and VO2 increased in a linear fashion as exercise intensity and RPE increased. 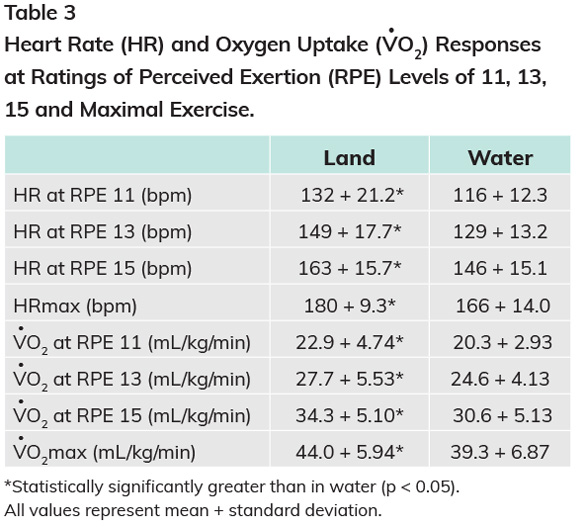 Where things get interesting is when we look at relative exercise intensity (%HRR and %VO2R) at each RPE level (Table 4 and Figures 4 and 5). There were no statistically significant differences in %HRR or %VO2R at RPE levels of 11, 13 or 15 between land- and water-based exercise. 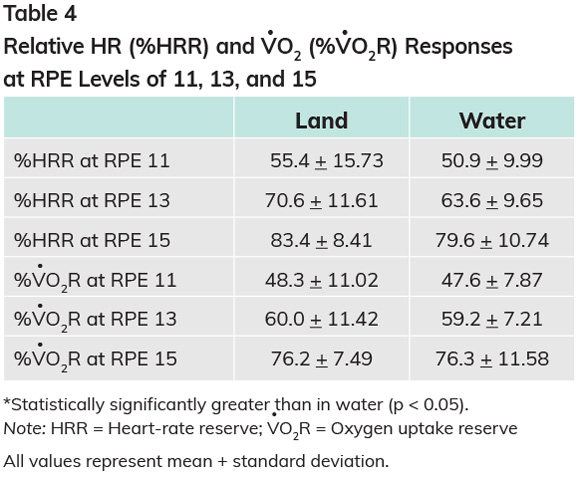 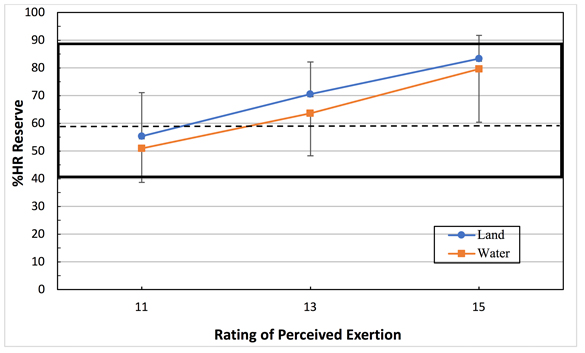 Figure 4. Comparison of %HRR between land- and water-based exercise at RPE levels of 11, 13 and 15. ACSM guidelines recommend exercising between 40 and 89% of HRR, which is represented by the boxed area on the graph. The separation between moderate- and vigorous-intensity ranges is represented by the dashed line. 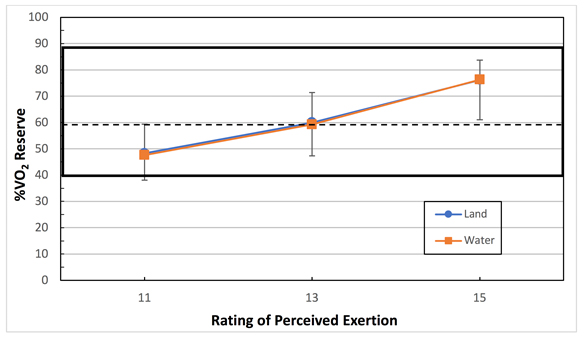 Figure 5. Comparison of %VO2R between land- and water-based exercise at RPE levels of 11, 13 and 15. ACSM guidelines recommend exercising between 40 and 89% of VO2R, which is represented by the boxed area on the graph. The separation between moderate- and vigorous-intensity ranges is represented by the dashed line.

The increase in hydrostatic pressure experienced when submerged in water shunts blood away from the extremities and to the core, thereby increasing venous return and stroke volume. This greater stroke volume means that the heart does not have to beat as quickly to produce the same cardiac output. Simply put, more blood per heartbeat means that fewer heartbeats per minute are needed to pump the same amount of blood to the working muscles.

So, yes, HR and VO2, which are absolute values, are higher during land-based cycling, but the relative values are nearly the same as during water-base exercise. This is because the maximal values (HRmax and VO2max) are lower in the water than on land. In this study, HRmax was on average 15 bpm lower and VO2max was on average 12% lower. This means that, even though HR and VO2 were considerably higher on land, when calculations were performed using percentages of maximal values, the participants were found to be working equally hard in both environments. As Dr. Porcari explains, “It is the percentage of the maximum, not the absolute value, that is important when discussing cardiorespiratory benefits.”

The purpose of Study #1 was to determine the relative exercise intensity and energy expenditure during an aqua cycling class and determine if aqua cycling meets ACSM guidelines for exercise programming. The study found that subjects were exercising at an average of 49% of HRR and 47% of VO2R, which is within the ACSM guidelines for improving cardiorespiratory fitness (i.e., 40 to 89% of HRR or VO2R, respectively). These averages reflect moderate-intensity exercise, though subjects did perform vigorous-intensity exercise during portions of the workout. This variation is typical of cycling classes, whether on land or in the water.

ACSM guidelines also recommend exercising between 12 and 17 on the 6 to 20 RPE scale to reap cardiorespiratory benefits. The overall intensity of the aqua cycling class was 11.0, which is classified as “fairly light” exercise, though when looking at only the 40-minute workout portion of the class (removing the warm-up and cool-down), the RPE was 12.2, which falls at the low end of the recommended range and would be classified as “light-moderate” exercise.

Finally, the subjects expended an average 363 kcal during the 50-minute class. This indicates that aqua cycling could be used as an effective workout for weight management.

The purpose of Study #2 was to compare the submaximal and maximal cardiorespiratory response to cycling exercise performed on land and in the water and to determine the potential impact on exercise programming. While absolute HR and VO2 values were lower in water compared to those same variables on land, they were blunted in a linear fashion all the way up to maximal exertion. Therefore, there was no difference in relative exercise intensity at any RPE level.

Taken together, these two studies reveal that aqua cycling, while less intense than land-based cycling, is a moderate-intensity exercise that burns enough calories to drive weight loss. Importantly, these results are derived with lesser impact on the joints, which means that aqua cycling is a great option for individuals who were previously physically inactive or have overweight, obesity or orthopedic problems, as well as for older adults.

Study #1 was first published in the International Journal of Research in Exercise Physiology.

Study #2 was first published in the International Journal of Research in Exercise Physiology.