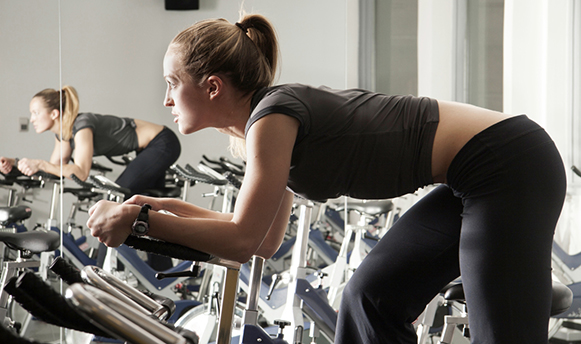 Indoor cycling remains a hugely popular form of group fitness, and previous research has shown that it can be a highly challenging and effective workout. Participants have a wide range of options for varying intensity, including pedal speed, tension and body position (e.g., sitting or standing). However, no prior research has examined the effect of wearing a weighted vest during stationary standing cycling. In addition, no research has investigated the effect of extended bouts of stationary standing cycling (1, 2, 3 and 4 minutes) on metabolic parameters such as heart rate (HR), oxygen consumption (VO2), or ratings of perceived exertion (RPE).

To shed some light on these questions, ACE enlisted a team of researchers, led by Dr. Len Kravitz, from the University of New Mexico in Albuquerque, to investigate the metabolic cost and effects of wearing a weighted vest during an indoor cycling class, specifically while standing.

Twelve cycle-trained female subjects, ages 32 to 48, were recruited for the study. Each participant randomly performed four, 4-minute standing vest trials. During the trials, participants either didn’t wear a vest, or wore vests of varying weights, which were determined as a percentage of body weight (i.e., 5%BW, 10%BW, 15%BW). A seated 4-minute trial at 65% peak power output (PPO) served as the control. VO2, kilocalorie expenditure (Kcal) and HR were monitored continuously during each exercise bout using open circuit spirometry and telemetry, and RPE was recorded at the end of each minute for each 4-minute trial.

Results indicated that VO2 was 8 percent higher in standing conditions as compared to the seated cycling position at the same cycling workload. Standing cycling at 65% PPO resulted in subjects exercising at 87-89% of their actual VO2max, indicating the challenging nature of standing cycling (with or without wearing a weighted vest) as compared to seated cycling. Cycling at 65% PPO resulted in HR responses ranging from 91-94% of the subjects’ actual heart rate-max values, also confirming the challenging workload of standing cycling bouts. For each standing condition, there was a significant increase in oxygen consumption between minute one and minute two. This represented a 67-76% increase in energy expenditure for all standing cycling conditions.

For those who use indoor cycling to maximize caloric expenditure, data from this investigation suggest that one of the most meaningful ways to increase kilocalorie expenditure is to include standing cycling bouts of 2 to 3 minutes (with or without weighted vests). Comparatively, during standing exercise (with or without weighted vests) the subjects expended an average of 6 Kcal/min during the first minute, 10.5 Kcal the second minute, and 11.5 Kcal for the combined average of minutes 3 and 4. A significant (p <0.05) difference in Kcal expenditure was found between standing cycling with 15%BW as compared to standing cycling with no vest. This suggests that a heavier weighted vest is needed to elicit higher energy expenditure outcomes.

It appears that standing cycling (with and without wearing a weighted vest) meets and may, at times, exceed industry guidelines (60% to <90% VO2reserve) for intensity necessary to maintain and/or improve cardiorespiratory fitness. Given the challenging nature of standing cycling, instructors are urged to consider the fitness levels of all participants, and to offer appropriate modifications for those who may not be able to sustain such a high level of intensity. It is also important to note that the subjects in this study rated standing cycling with or without a weighted vest as “somewhat hard” to “hard,” despite the fact that their physiological parameters suggested they were training at a “very hard” intensity. Cyclists that are less highly trained would likely rate the same exertion as much more challenging, which could lead to discouragement or demotivation for some participants.

Len Kravitz, Ph.D., is the Coordinator of Exercise Science at the University of New Mexico, where he recently won the Outstanding Teacher of the Year award. Kravitz was also honored as the 2006 Fitness Educator of the Year by the American Council on Exercise. His research interests include energy metabolism, exercise product evaluation, and exercise program measurement and assessment.