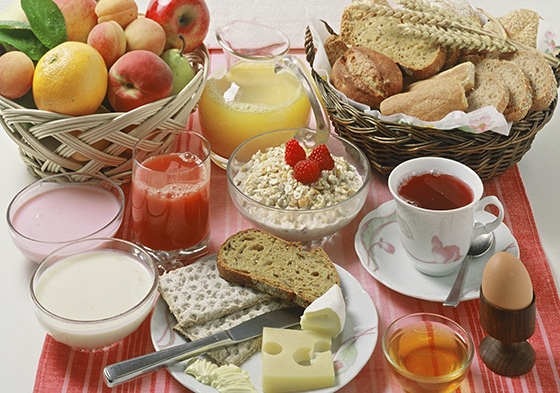 Whether your clients hope to lose weight or just stay healthy, what they eat is a crucial factor. The right nutrients not only can help trim the waistline, but they also provide energy, improve mood and stave off disease. Now a study conducted at Tel Aviv University (TAU) has found that it’s not just what a person eats—but when, giving credence to the old saying to eat breakfast like a king, lunch like a prince and dinner like a pauper.

Metabolism is impacted by the body's circadian rhythm—the biological process that the body follows over a 24-hour cycle. So the time of day we eat can have a big impact on the way our bodies process food, says Dr. Daniela Jakubowicz of TAU's Sackler Faculty of Medicine and the Diabetes Unit at Wolfson Medical Center. In her recent study, she discovered that those who eat their largest daily meal at breakfast are far more likely to lose weight and reduce their waistline circumference than those who eat a large dinner.

And the benefits went far beyond pounds and inches. Participants who ate a larger breakfast—which, interestingly, included a dessert item such as a piece of chocolate cake or a cookie—also had significantly lower levels of insulin, glucose and triglycerides throughout the day, which resulted into a lower risk of cardiovascular disease, diabetes, hypertension and high cholesterol. These results, published recently in the journal Obesity, indicate that proper meal timing can make an important contribution toward managing obesity and promoting an overall healthy lifestyle.

To determine the impact of meal timing on weight loss and health, Dr. Jakubowicz and her fellow researchers randomly assigned 93 obese women to one of two isocaloric groups. Each consumed a moderate-carbohydrate, moderate-fat diet totaling 1,400 calories daily for a period of 12 weeks. The first group consumed 700 calories at breakfast, 500 at lunch, and 200 at dinner. The second group ate a 200-calorie breakfast, 500 calorie lunch, and 700 calorie dinner. The 700-calorie breakfast and dinner included the same foods.

By the end of the study, participants in the “big breakfast” group had lost an average of 17.8 pounds each and 3 inches off their waistlines, compared to a 7.3-pound and 1.4-inch loss for participants in the “big dinner” group. According to Jakubowicz, those in the big breakfast group had significantly lower levels of the hunger-regulating hormone ghrelin, an indication that they were more satiated and had less desire for snacking later in the day than their counterparts in the big dinner group.

The big breakfast group also showed a more significant decrease in insulin, glucose and triglyceride levels than those in the big dinner group. More importantly, they did not experience the high spikes in blood glucose levels that typically occur after a meal. Peaks in blood sugar levels are considered even more harmful than sustained high blood glucose levels, leading to high blood pressure and greater strain on the heart.

These findings suggest that people should adopt a well thought-out meal schedule, in addition to proper nutrition and exercise, to optimize weight loss and general health. Eating the right foods at the wrong times not only slows down weight loss, it can also be harmful. In their study, the researchers found that those in the big dinner group actually increased their levels of triglycerides—a type of harmful fat found in the body—despite their weight loss.

Although it may seem obvious, fitness professionals can assist their clients in their weight-loss efforts by urging them to avoid late-night snacking as much as possible. Mindless eating in front of the computer or television, especially in the late evening hours, says Jakubowicz, is a huge contributor to the obesity epidemic. Not only does it make weight loss significantly more difficult, it also increases the risk of cardiovascular disease—making that midnight sugar rush more costly than it appears.