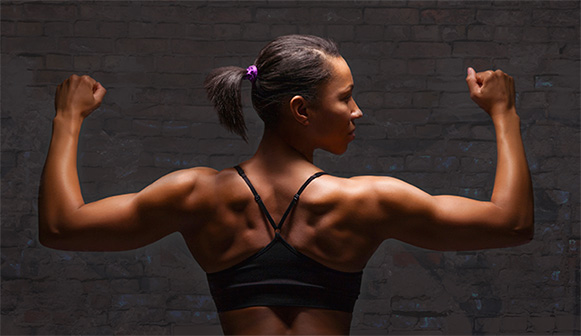 The shoulders—the deltoids—are among the most important muscles we use in daily life. Whether we’re pushing, pulling or lifting things over our heads, the shoulder muscles always come into play. They’re also a key factor in aesthetics. Broad shoulders make a person look strong and confident, and can even make one's waist look slimmer. 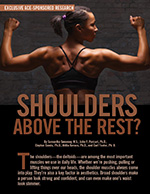 Despite all the functional and aesthetic benefits of strong shoulders, they’re also some of the most misunderstood and oft-neglected muscles. Here’s why: The shoulder is a complex ball-and-socket joint that’s capable of flexion, extension, rotation and more, and there are three distinct muscles required to perform these movements—the anterior, medial and posterior deltoids. The problem is people mostly pay attention to the anterior deltoids—the muscles on the front of the shoulder—probably because those are the ones we see in the mirror every day. Neglecting the medial and posterior deltoids can result in an unbalanced look and, more importantly, can lead to shoulder injuries and disorders that, studies show, affect up to 69 percent of people at some point in their lifetime.

With this in mind, the American Council on Exercise, the nation’s Workout Watchdog, teamed up with the exercise scientists from the Clinical Exercise Physiology program at the University of Wisconsin—LaCrosse to determine which exercises are most effective for strengthening the shoulder muscles. By identifying the most effective moves for shoulder muscles, ACE’s hope is that exercisers can be more time efficient with their workouts and, thus, more likely to stick with them for the long term.

Next, researchers recruited 16 healthy male volunteers between the ages of 18 and 30. To ensure that all of the exercises would be performed correctly during testing, all of the subjects were required to have some weight-lifting experience and attended one mandatory practice session.

Each subject participated in three testing sessions, with a minimum of three days of rest between each session. During the initial testing session, researchers set a baseline of fitness for each subject by establishing one-repetition maximums (1-RM) for every exercise except push-ups, dips and battling ropes, because these exercises use body weight or a rope as resistance. 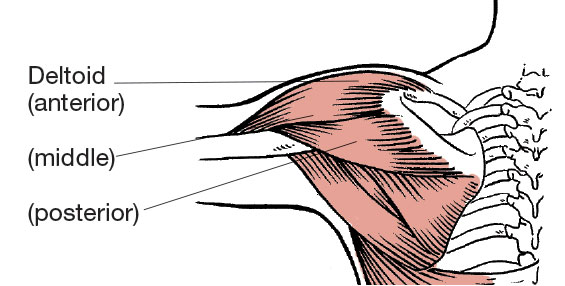 For the remaining two days of testing, electromyogrphy (EMG) electrodes were placed on each subject on the three different muscle heads of the shoulder—the anterior, medial and posterior deltoids. After a brief three-minute warm-up on an upper-body arm ergometer, the subjects performed three maximal voluntary contractions (MVC) held for 10 seconds each, and then each of the five shoulder exercises in a randomly assigned order (the remaining five were performed on the final day of testing).

For each exercise, subjects performed five reps, using 70 percent of 1-RM for resistance in each exercise except battling ropes, push-ups and dips. Subjects were given a three-minute rest period between each exercise to ensure a full recovery. Meanwhile, researchers collected EMG data for the concentric and eccentric phase of each lift and every rep and set. However, only the second, third and fourth reps were used to determine average muscle activation data.

Following the testing sessions, researchers used statistical equations to crunch the numbers (Tables 1-3; Figures 1-3). For targeting the anterior deltoid, the dumbbell shoulder press elicited significantly higher muscle activation than any other exercise tested. For the medial deltoid, two exercises came out on top: the 45-degree incline row and the bent-arm lateral raise. Finally, for the posterior deltoid, researchers found that the seated rear lateral raise and the 45-degree incline row both provided the greatest muscle activation for the back of the shoulder.

“There’s not one best exercise for targeting the shoulders,” says John P. Porcari, Ph.D., head of the University’s Clinical Exercise Physiology Department. Because the shoulder is such a complex joint, Porcari explains, it is impossible for one exercise to maximally activate all three heads of the deltoid muscle at one time.

“You have to target the shoulder with more than one exercise, and you have to be aware which area of the deltoid each exercise is targeting,” says lead researcher Samantha Sweeney, M.S. “For instance, if you’re doing front raises, shoulder press and lateral raises you’ve actually just doubled up on the anterior deltoid, hit the middle and then totally neglected the posterior deltoid. You’re not getting a well-rounded workout.”

For the optimal workout, you’re best served doing the dumbbell shoulder press to target the front of the shoulders, and either the 45-degree incline row or the seated rear lateral raise for the rear part of the shoulders. “I like the seated rear lateral raise just because it’s easier,” says Porcari. It’s important to note that all three of those exercises are also relatively effective at activating the medial deltoid, with the 45-degree incline row eliciting the greatest co-activation.

And if you were going to remove one commonly used, yet ineffective shoulder exercise from your workout, which one should you drop? That’s easy: the upright row. “Although lots of people do the upright row and think it’s great, our results showed it to be low on all ends of the spectrum,” says Sweeney.

Sweeney further recommends it’s best to begin your shoulder workout with exercises that target the posterior deltoid first, because it’s typically the weakest of the shoulder muscles, then follow up with an exercise for the stronger anterior deltoid.

Whether your goal for strength training your shoulder muscles is to look better, improve sports performance, or simply to avoid injury and be better prepared for everyday tasks, following the recommendations from this research will help you get fitter, faster—and what could be better than that?

How to Perform the Top Shoulder Exercises 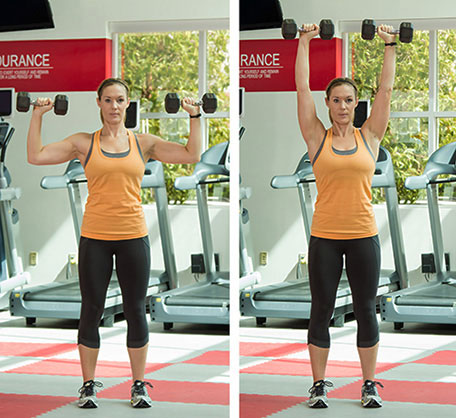 Dumbbell Shoulder Press
Stand with feet hip-width apart, knees slightly bent and core stabilized. With a dumbbell in each hand, bring your upper arms up until the are even with the sides of the shoulders. Press the dumbbells upward until your arms are extended overhead and lower back to the sides of your shoulders to finish the movement. 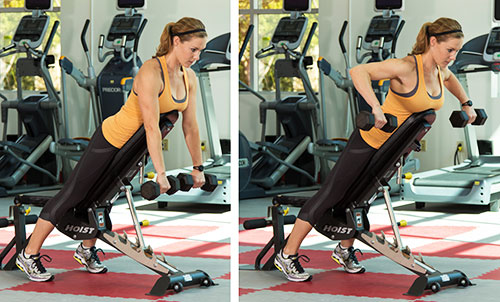 45-degree Incline Row
Lying prone on a 45-degree incline bench, let your arms hang straight while holding a dumbbell in each hand. Slowly lift your arms as high as possible by squeezing the shoulder blades together. Throughout the movement, the upper arms should remain perpendicular to the body, with the forearms pointed toward the floor. After reaching the top of the movement, slowly lower the dumbbells back to the starting position.

Seated Rear Lateral Raise
Sit on the edge of a bench with your feet on the floor. While bending over and, if flexibility allows, resting your torso on your thighs, grasp the dumbbells while the arms are extended under your legs. Maintain a flat back position as you slowly raise your arms to your sides until your elbows are at shoulder height. The arms should be perpendicular to your torso, with a fixed elbow position (10° to 30° angle) throughout the exercise. Then slowly lower the dumbbells back to the starting position. 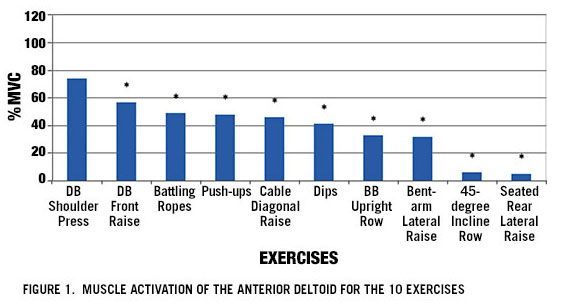 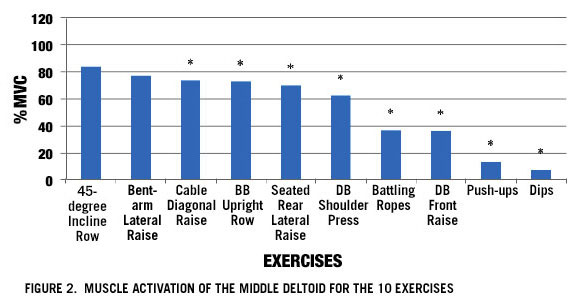 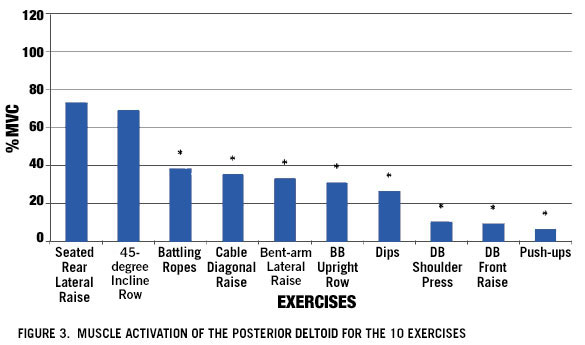