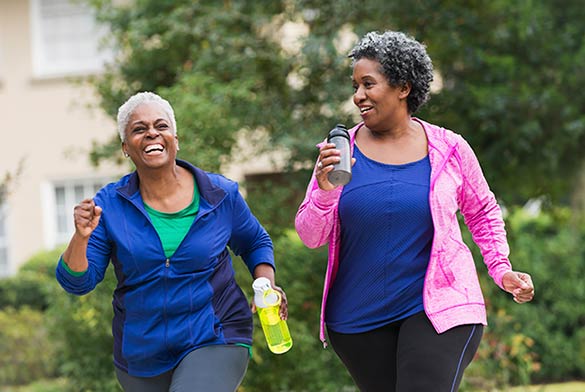 Walking is the most popular form of exercise and offers great health benefits, even if it doesn’t burn as many calories as running or other more intense forms of exercise. But a new study has some encouraging news: The equations commonly used to predict the number of calories burned during walking count too few calories in nearly all cases on level surfaces.

Here’s why: Standardized equations commonly used to predict or estimate walking energy expenditure assume that one size fits all. Plus, the equations, which have been in place for close to half a century, were based on data from a limited number of people.

“Our new equation is formulated to apply regardless of the height, weight and speed of the walker,” said Ludlow, a researcher in the SMU Locomotor Performance Laboratory of biomechanics expert Dr. Peter Weyand. “And it’s appreciably more accurate.” Study results, along with the new equation, were published earlier this year in The Journal of Applied Physiology.

“The economy of level walking is a lot like shipping packages,” explains Weyand. “There is an economy of scale. Big people get better gas mileage when fuel economy is expressed on a per-pound basis.”

The research comes at a time when greater accuracy combined with mobile technology, such as wearable sensors like Fitbit, is increasingly being used in real time to monitor the body’s status. The researchers note that some devices use the old standardized equations, while others use a different method to estimate the calories burned.

To provide a comprehensive test of the leading standards, SMU researchers compiled a database using the extensive walking metabolism data available in the existing scientific literature to evaluate the leading equations for walking on level ground.

“The SMU approach improves upon the existing standards by including different-sized individuals and drawing on a larger database for equation formulation,” Weyand explains.

The exact dates are a bit murky, but the leading standardized equations, known by their shorthand as the “ACSM” and “Pandolf” equations, were developed about 40 years ago for the American College of Sports Medicine (ACSM) and for the military, respectively, Ludlow says.

The Pandolf method, for example, draws on walking metabolism data from six U.S. soldiers, she said. Both the Pandolf and ACSM equations were developed on a small number of adult males of average height.

SMU’s new and improved equation for predicting the energy expenditure of walking:

The new, more accurate equation will prove useful, as predicting energy expenditure is common in many fields, including those focused on health, weight loss, exercise, military and defense, and professional and amateur physical training. Accurate estimations of the rate at which calories are burned could potentially help predict a person’s aerobic power and likelihood for executing a task, such as training for an athletic competition or carrying out a military objective.

In general, the new metabolic estimates can be combined with other physiological signals such as body heat, core temperature and heart rate to improve predictions of fatigue, overheating, dehydration, the aerobic power available and whether a person can sustain a given intensity of exercise.