Battle of the Sexes: Should Training Guidelines for Men and Women Be the Same? 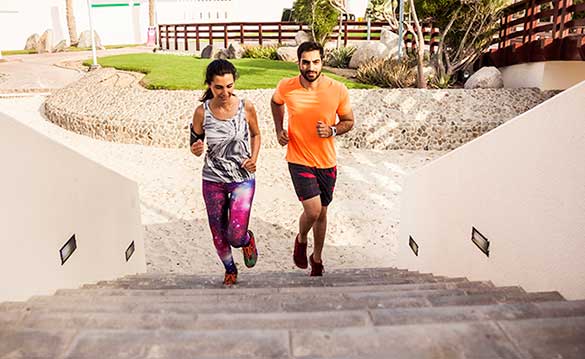 It is well known that men and women have markedly different physiology. For instance, women have a greater percentage of slow-twitch muscle fibers when compared to men. Alternatively, men have considerably more fast-twitch muscle fibers than women.  Additionally, there are significant sex differences in the endocrine, cardiovascular and other systems. Therefore, it is somewhat paradoxical that most exercise guidelines for men and women are basically the same. This article highlights key physiological differences between women and men, and provides health and fitness professionals with important training recommendations that account for these sex differences and help to optimize training effectiveness for both male and female clients.

Research has shown that women have a higher proportion of type I skeletal muscle fibers (Hicks, Kent-Braun and Ditor, 2001; Simoneau and Bouchard, 1989; Brooks and Engel, 1969). Conversely, research shows that type II muscle fibers are more prevalent than type I in men (Komi and Karlsson, 1978). The differences found in muscle-fiber proportion between men and women most certainly contribute to varying performance capabilities. For example, studies show that women have a greater resistance to skeletal muscle fatigue when compared to men (Salvador et al., 2009; Clark et al., 2005; Hunter et al., 2004). It has been suggested that the primary mechanism underpinning these fatigue-resistance differences is the sex-specific differences in type I fibers. By contrast, research also shows that men have a greater overall power output than women (Thomas et al., 2007). The assumed mechanism behind this is that men have a higher proportion of type II muscle fibers relative to women.

For a human body to perform any type of exercise, energy—in the form of ATP—is needed, and is manufactured by three systems: the phosphagen system, glycolysis and mitochondrial respiration. These three energy systems utilize different forms of fuel, also known as substrates, and produce ATP through different chemical processes. The common substrates are phosphocreatine, carbohydrates (CHO) in the form of glucose or glycogen, and lipids in the form of free fatty acids. The chemical processes for each of the energy systems vary in complexity.

The phosphagen system is the simplest chemical reaction and the quickest source of ATP. Glycolysis requires the use of one or two molecules of ATP (depending if the substrate is glucose or glycogen) and can yield two or three molecules of ATP. Although the chemical reaction of glycolysis is not as quick as the phosphagen system and has an ATP cost, it is still a rapid source of energy. Mitochondrial respiration yields the greatest number of ATP molecules, but the rate of production is considerably slower than the phosphagen system or glycolysis (Porcari, Bryant and Comana, 2015). Mitochondrial respiration can utilize both lipids and CHO as substrates (i.e., fuel sources). Mitochondrial respiration, when using CHO as a fuel source, has a faster ATP production rate, relative to when lipids are used as the fuel source.

There are a number of key differences between men and women with respect to substrate utilization. For example, one study reported that men had a 15 to 32 percent higher glycolytic enzymatic capacity when compared to women. The same study also found that women had a 15 percent higher capacity for ß-oxidation (i.e., burning fat) relative to men (Green, Fraser and Ranney, 1984). Moreover, research has repeatedly shown that women demonstrate a 4 to 5 percent lower respiratory exchange ratio (RER) than men during submaximal endurance exercise (Tarnopolsky, 2000, Tarnopolsky et al., 1997, Tarnopolsky et al., 1995). Collectively, these findings demonstrate that women are generally more reliant on lipids as a fuel source, whereas men tend to be more dependent on CHO as a substrate for metabolism. These sex differences in substrate selection can in part be explained by the dissimilarities in the distribution of muscle fibers mentioned in the previous section.

Two principal hormones upregulated in the body during prolonged exercise are the catecholamines: epinephrine and norepinephrine. Produced in the sympathetic nerve fibers and the adrenal medulla, these two hormones play a major role in oxygen and energetic substrate transportation to active skeletal muscles. Catecholamines have been shown to stimulate respiratory, cardiac, metabolic and thermoregulatory functions (Zouhal et al., 2008).

Why are men and women typically shaped differently? This can be attributed, in part, to the fact that men and women differ substantially in the concentrations of the sex hormones 17-ß-estradiol and testosterone. For example, women have a fivefold greater plasma concentration of 17-ß-estradiol, while men have a nearly 15-fold higher plasma concentration of testosterone (Garaulet et al., 2000). In turn, it has been demonstrated that testosterone levels are significantly correlated with body composition values in men; in a similar manner, 17-ß-estradiol levels are significantly related to abdominal obesity in women. Additionally, it is well known that (on average) men have lower body-fat percentages when compared to women, and that women typically store body fat peripherally and subcutaneously rather than around the abdominal region like men.

The differences in body composition and adipose tissue distribution underpin important sex-specific differences in thermoregulatory capacity. Interestingly, research has demonstrated that in a hot environment, men begin to sweat at a lower core temperature, more quickly and at a greater magnitude relative to women. One study had men and women pedal on a cycle ergometer that was immersed in 82.4°F (28°C) water for 100 minutes at an intensity of 60 percent maximal oxygen uptake. Researchers found that men began to sweat at a core temperature of 98.4°F (36.9°C), while women did not begin to sweat until a significantly higher core temperature of 99°F (37.2°C) (Anderson, Ward and Mekjavic, 1995).

Table 1 summarizes the major physiological differences between women and men that can affect training recommendations. 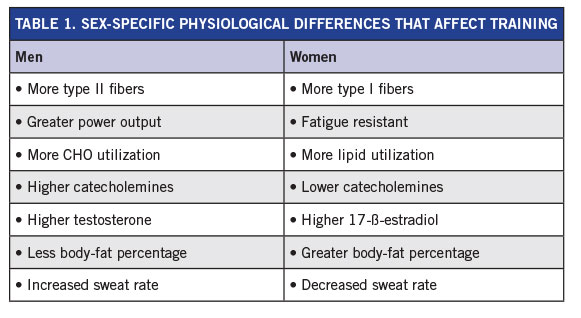 Next, let’s look at several practices aimed at enhancing training effectiveness in male and female clients, given their different physiological profiles.

1. Establish Realistic Goals for Both Male and Female Clients

Substantial public health efforts have recently been aimed at promoting and increasing levels of physical activity. Regrettably, the prevalence of physical inactivity remains too high. One major area of concern is that long-term maintenance of regular exercise remains poor, with attrition rates for structured exercise programs ranging from 9 to 87 percent. Simply put, many clients are able to successfully initiate an exercise program, but fail to adhere to regular exercise throughout the lifespan.

There are numerous strategies you may elect to employ with your clients to enhance exercise adherence, including identifying individualized and achievable exercise-program goals. However, implementation of this practical recommendation requires that you have an appreciation of sex-specific differences in maximal cardiorespiratory and muscular fitness capacity and other key cardiometabolic risk factors dissimilarities. Without this knowledge, you run the risk of establishing unrealistic goals for both your male and female clients.

Recovery from exercise training is a vital component of the overall exercise program, and paramount for performance and continued improvement. If the rate of recovery is suitable, higher training volumes and intensities are possible without the detrimental effects of overtraining. Understanding the physiological concept of recovery is essential for designing effective training programs.

Nevertheless, considerable individual variability exists within the recovery process due to training status (trained vs. untrained), factors of fatigue and sex differences. As previously discusses, there are notable physiological differences between men and women with respect to fatigue. Indeed, differences in skeletal muscle fiber type, substrate utilization and various hormone concentrations are collectively responsible for women being more resistant to fatigue when compared to men. This physiological reality should be considered when making recovery recommendations.

3. I.T.T. Recommendations Should Be Different for Women and Men

Exercise training can be optimized by correctly managing the various components surrounding the exercise program (American College of Sports Medicine, 2014). To help ensure both your male and female clients achieve their health- and fitness-related goals, plan an appropriate F.I.T.T. (frequency, intensity, time, type) that is sex-specific.

Gratas-Delamarche, A. et al. (1994). Lactate and catecholamine responses in male and female sprinters during a Wingate test. European Journal of Applied Physiology, 68, 362-366.

Hazelhurst, L.T. and Claassen, N. (2006). Gender differences in the sweat response during spinning exercise. Journal of Strength and Conditioning Research, 20, 723-724.

Zouhal, H. et al. (2008). Catecholamines and the effects of exercise, training and