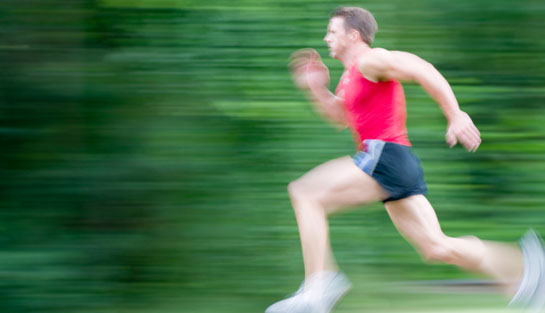 While interval training in general has become the preeminent regimen in fitness circles, Danish researchers think they have found a precise ratio that can boost both performance and overall health universally—while drastically reducing training time. Is “10-20-30,” as it quickly has become known, the exercise equivalent of the philosopher’s stone? Or is it just another workout sequence trainers can add to their toolbox? We canvassed the experts—including one of the Danish researchers—who did the math for us…

For several years, the watchwords in fitness have been “high-intensity interval training” (HIIT) and “less is more”—or at least a lot better than being sedentary. A scramble for the fitness enthusiast’s dollar ensued, with Crossfit, Tabata and the Little method emerging among the leaders of the HIIT brigade.

But no one had devised a single, precise formula for the intervals that anyone could use until earlier this year, when researchers at the University of Copenhagen published a study that quickly became known as “10-20-30” (Gunnarsson and Bangsbo, 2012).

The numbers refer to a one-minute sequence of low- (30 seconds), medium- (20 seconds) and high-intensity (10 seconds) running. When done in three or four “blocks” of five minutes each, preceded by a brief warm-up and interspersed with a two-minute rest, the 18 runners in the study dramatically boosted their performance in 1500-meter and 5-kilometer runs in just seven weeks—despite cutting their total workout time in half. The 1500-meter runners improved their times by 23 seconds, and the 5k runners showed a one-minute improvement. The regimen also reduced the subjects’ blood pressure and cholesterol levels, which is typical of endurance training, even among untrained subjects.

The entire regimen can be completed in 20 to 30 minutes and, since the equation represents a relative and not a specific speed, it is flexible enough for people of all fitness levels.

So claims Dr. Thomas Gunnarsson, one of the Danish researchers, who explains that 10-20-30 (which some refer to as 30-20-10) was born of a desire to create a fast, easy and effective workout that “would motivate runners independent of their fitness level and training history.”

Gunnarsson’s team had experimented with 30-second high-intensity intervals in trained runners and seen performance improvements. However, he says, “Thirty-second intervals are very demanding,” so his team tried to see if shorter intervals would produce equal or similar gains. Gunnarsson says he wasn’t surprised that the 10-second intervals worked as well as they did.

While the influence of 10-20-30 remains to be seen, the experts canvassed for this article were nearly unanimous in their approval of the study’s methodology—and most found the results encouraging, especially the regimen’s potential appeal to a time-crunched population.

Dr. Cedric X. Bryant, ACE’s chief science officer, says that coaches and exercisers have known the value of the HIIT approach for many years. “We’ve seen how adding speed runs to the workouts of moderately trained runners will not only help them run faster, but are necessary for them to do so,” Bryant explains. “This is true across a wide range of running distances. [10-20-30] is just another, efficient spin on HIIT.”

Bryant particularly likes 10-20-30 because “it challenges the one-size-fits-all approach to training and shows that there are many viable alternatives for improving performance.” He also feels that “a certain personality type” motivated by challenges and an accompanying sense of accomplishment will gravitate to it.

Dr. John McCarthy, a professor of physical therapy at the University of Alabama in Birmingham, also sees benefits to this approach. “It sounds like a pretty effective, simple technique that can benefit everyone from the deconditioned to higher-level athletes. In past studies, the subjects were walking or doing nothing during the ‘rest’ phase, but here they’re going from high-intensity to low—but still moving—intensity. So you’re not really taking a break.”

The only dissenter was Dr. Don Franks, professor emeritus in kinesiology at the University of Maryland. “Interval training usually is used at both ends of the spectrum—with elite athletes and people just starting exercise who can’t run or walk for very long—unlike the moderately trained subjects in the study,” explains Franks. He recommends that the active non-athlete exercising to improve health and fitness should do so at 70 percent of his or her VO2max. Athletes, on the other hand, need to work out at a higher intensity, says Franks.

Franks had a second qualm: “They’re saying you can get better results with less work. This flies in the face of previous studies, which used intervals to achieve a higher volume of work, because they’ve shown that the group that does the most work gets the most done. But here it was the opposite.”

In an email interview with ACE Certified News, Dr. Gunnarsson rebutted the first two objections. To the first, he responded, “Our research over the last decade clearly shows that interval training above VO2max and a reduction in training volume improved the performance of sub-elite athletes during both repeated short-term exercise bouts, as well as endurance events such as 10K running.”

He also addressed Franks’ second point of dispute—that in the past, those with the highest workload got the most benefits—by emphasizing that “increasing the training intensity clearly increases the load, so you need to decrease the total amount of training to prevent overload.”

In other words, people performing HIIT need some pit stops. Gunnarsson staunchly advocates rest intervals: “We believe that if [individuals] train with quality and allow proper rest time, athletes of all levels can glean long-term benefits.”

When asked how his team arrived at the specific 10-20-30 ratio and what about it most led to its effectiveness, Gunnarsson replied, “We chose it because of its brief, intense bouts. There’s a big difference between sprinting 10 and 20 seconds— even between 10 and 15—and we wanted our concept to be easily adapted by runners of different levels.”

McCarthy sees the logic behind 10-20-30. “It seems like it would be comfortable for most people, because you only work at the highest intensity for 10 seconds.”(Note: All of our experts agreed with Gunnarsson that longer intervals eventually produce diminishing returns.)

Franks was the only expert who questioned the length of the study: “It was only seven weeks. What will happen if you do this for months? Would you level off?”

The answer is: Nobody knows, as it hasn’t yet been studied. Additional questions meriting ongoing research include:

Even Gunnarsson admits that 10-20-30 has its limits—such as the fact that it is hard to perform on a treadmill or similar cardio machine, due to “the constant change in pace and the fact that treadmills and the like tend to react slowly to increases in speed—some take more than 10 seconds.”

Bryant fears that unless they’re properly supervised, too many people won’t build in the required recovery time.

Another concern is the possibility of injury. “You’d better make sure you’re orthopedically sound,” warns Bryant, “because any HIIT workout uses faster speeds and higher impact levels, which add stress to the musculoskeletal system.”

The overall consensus is that personal trainers could finesse 30-20-10 into their clients’ existing workouts.

Gunnarsson advises trainers to introduce the concept slowly to most clients, because “the sprinting can be hard on the glutes and hamstrings.” Clients not used to running should not do more than two five-minute HIIT blocks once or twice a week, and the trainer should make sure that they don’t sprint all-out during the first three sprints in each training session. “Once the client is accustomed to this type of training, you push the intensity, increasing the running distance slowly during both the 20- and, especially, the 10-second intervals—which are the key to the workout.”

Several experts felt 10-20-30 would introduce variety. For example, Gunnarsson says clients could use it twice a week and do a longer outdoor run on two other days.

Bryant recommends starting with one 10-20-30 session per week, and only with performance-oriented clients (those who compete in recreational races or play tennis, basketball or soccer) or those pressured by time.

Gunnarsson provided a sample workout for those intrigued by the potential benefits of 30-20-10 for themselves and their clients (see sidebar “10-20-30 Sample Workout”).

Perhaps in the near future researchers will come even closer to finding the ultimate HIIT ratio. At least for now, however, 10-20-30 are the numbers to play.