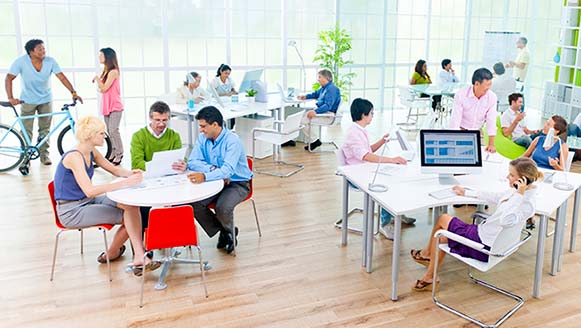 With so much focus on healthcare costs this New Year as the Affordable Care Act took effect, coupled with the widespread prevalence of obesity, the findings of a new study suggesting that an individual’s future healthcare costs rise in direct proportion to increases in body mass index (BMI) could be significant to a great number of Americans. According to the study, published in the journal Obesity, the costs associated with medical and drug claims rose gradually with each unit increase in body mass index (BMI). Notably, these increases began above a BMI of 19, which falls in the lower range of the healthy BMI category.

“Our findings suggest that excess fat is detrimental at any level,” says lead author Truls Østbye, M.D., Ph.D., professor of community and family medicine at Duke University and professor of health services and systems research at Duke-National University of Singapore.

The idea that obesity is linked to poor health and even premature death is not new, but it is not completely definitive. After all, a study published in early 2013 in the Journal of the American Medical Association, using death data from several large population studies, concluded that while higher degrees of obesity were associated with higher mortality rates, being overweight or even slightly obese was actually linked with lower mortality. Because these findings questioned the general belief that high body mass leads to poor health outcomes, Østbye and his colleagues sought to better understand the rates of obesity-related disease, or morbidity, by measuring healthcare utilization and costs.

Using health insurance claims data for 17,703 Duke employees participating in annual health appraisals from 2001 to 2011, the researchers related costs of doctors’ visits and use of prescription drugs to employees’ BMIs.

BMI is a measurement of a person’s weight adjusted for his or her height, and can be used to screen for possible weight-related health problems. A healthy or normal BMI is 19 to 24, while overweight is 25 to 29 and obese is 30 and higher. For example, a 5-foot-4-inch woman who weighs 115 pounds has a BMI of 19.7, while a person of the same height weighing 187 pounds has a BMI of just over 32. Underweight individuals (who reported a BMI less than 19) were excluded from this analysis, as very low weight may be a result of existing illness.

Measuring costs related to doctors’ visits and prescriptions, the researchers observed that the prevalence of obesity-related diseases increased gradually across all BMI levels. In addition to diabetes and hypertension—the two diseases most commonly associated with being overweight or obese—the rates of nearly a dozen other disease categories also grew with increases in BMI. Cardiovascular disease was associated with the largest dollar increase per unit increase in BMI.

The study did not find a change in the relationship between levels of obesity and healthcare costs from 2001 to 2011. It is significant to note that the current findings suggest that the occurrence of obesity-related illnesses and related costs begin increasing at a healthy weight. This is in contrast to previous studies, which concluded that only more obese people were at a higher risk of death.

Given the growing health costs associated with excess weight, the researchers stressed the importance of implementing effective health and weight-loss programs.

“The fact that we see the combined costs of pharmacy and medical more than double for people with BMIs of 45 compared with those of 19 suggests that interventions on weight are warranted,” says Marissa Stroo, who was part of the study team.

Researchers also noted that the workplace is a good setting for implementing weight loss programs, given that employers can target the more than 100 million Americans who spend most of their waking hours at work. The Affordable Care Act recognizes this advantage, and has created new incentives to promote employee wellness programs. Clearly, there has never been a better time for qualified fitness professionals looking to expand their services by offering corporate wellness programs.

After all, explains Østbye, whether directly or indirectly, employers “end up paying for a large portion of these healthcare costs.”

Østbye and his team are currently evaluating the impact of employer-sponsored weight- and health-management programs on healthcare costs. 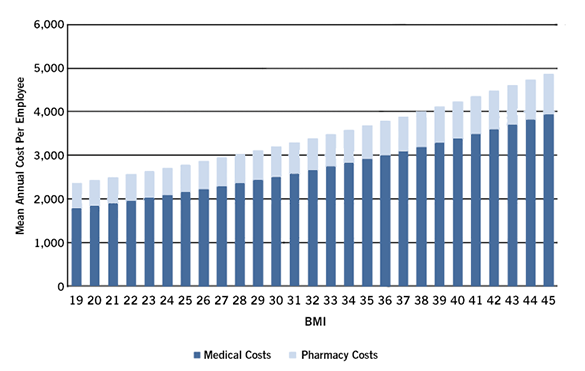