Could High-sodium Sports Drinks Be Doing More Harm than Good? 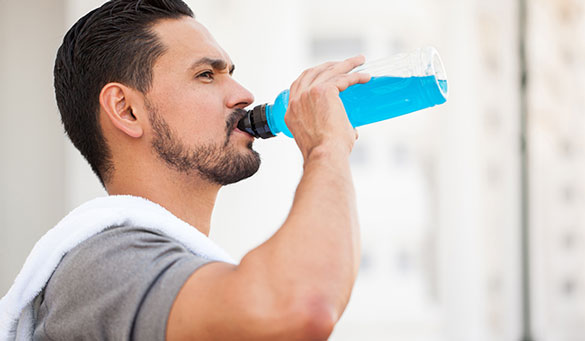 But were the headlines on target or unnecessarily alarmist? Could high-sodium electrolytes and sports drinks, in fact, be doing more harm than good for active individuals? Here is a breakdown of what we know about sodium, its effects on the body, the new research causing all the controversy, and what your clients need to know to stay healthy and hydrated.

Why Is Salt Important for Athletes?

Here’s a quick review on why salt is so important, particularly to athletes who sweat a lot.

Salt, which is composed of the minerals sodium and chloride, is essential for life and athletic performance. Sodium and chloride regulate fluid balance and, therefore, blood volume. In addition, these minerals are electrolytes that are necessary for nerve impulses, muscle pH and muscle functioning (Sawka et al., 2007).

The Adequate Intake for sodium—the average amount deemed adequate for healthy people—is 1.5 grams per day. However, many athletes need more to replace sodium losses in sweat, which generally range from 230 to 2,277 mg or more per liter of sweat, to keep blood sodium within a normal range and help retain fluid consumed (Osterberg, Horswill and Baker, 2009; Institute of Medicine of the National Academies, 2006). Uncompensated sodium losses can lead to hyponatremia, a condition marked by dangerously low blood sodium that can lead to a number of symptoms including muscle cramps, fatigue and headaches and, at worst, may result in death.

In the two new studies, which were published in The Journal of Clinical Investigation, Russian scientists gave 10 healthy men and women three different levels of salt—6, 9 and 12 grams per day—over two space flight simulation periods of 105 and 205 days (these are considered ultra-constrained conditions). All of these salt intake levels were far above the average American intake of 3,552 mg per day in adults (Jackson et al., 2016).

The researchers found that increased dietary salt intake actually led to greater salt excretion through urine, decreased fluid intake and a larger amount of urine produced compared to those consuming a lower salt intake. The results were surprising, given that salt is commonly believed to stimulate thirst and fluid consumption while expanding extracellular fluid volume in the body. Salt excretion through urine corrects extracellular volume to normal levels by excreting excess fluid. So where was the fluid in the urine coming from if they didn’t drink more? The researchers postulated that the subjects’ bodies were actually producing more water when salt intake was high.

Salt Intake and Exercise: Have We Been Wrong All Along?

Although this research raises some interesting questions about sodium and fluid balance, it is not entirely applicable to your average health and fitness client.

“The subjects [in this study] were cloistered together for long periods, [which is] certainly not a normal free-living environment,” notes Bob Murray, Ph.D., FACSM, founder of Sports Science Insights, LLC. “Most of our daily fluid intake does not occur due to thirst, but to spontaneous drinking associated with social situations—or perhaps out of boredom when we’re alone.” In fact, thirst lags behind fluid needs. It might take a 2 to 3% loss in body mass from fluid before thirst kicks in (Greenleaf, 1992).

Also worth noting is the amount of sodium the subjects consumed, which was approximately two to four times more than the average American consumes. Furthermore, the subjects’ energy expenditures and sweat (sodium) losses were low compared to athletes in training. So, while the subjects consumed large amounts of salt, they didn’t excrete much salt through sweat, which is a very different scenario from what athletes typically experience.

Because salt is comprised of 40% sodium, 12 grams of salt is equivalent to 4.8 grams of sodium, which, as Murray points out, is “an amount that many athletes lose in their sweat on a daily basis. Under those circumstances, we might guess that the effects on hunger, thirst, hormonal response, food and fluid intake [of an athlete] might be different than what was observed in subjects living in hermetically sealed modules” for an extended period of time.

Separate from the question of the effects of sodium on fluid intake, many people are rightly concerned about the relationship between salt and blood pressure. This is another area where many misconceptions about dietary salt intake prevail, particularly because most nutritional advice is geared toward average, overweight and/or sedentary adults rather than highly active adults and athletes.

In the general population, higher sodium intake is associated with greater risk for cardiovascular disease. However, there is no known benefit to consuming less than the recommended 2,300 mg sodium per day. In fact, the Institute of Medicine found that very low sodium intake (between, 1,500 and 2,300 mg per day) could actually be harmful for those with diabetes, kidney disease, or cardiovascular disease (Strom, Yaktine and Oria, 2013).

Although some athletes consume significantly greater amounts of sodium, it’s all about balance. They are also losing significantly more sodium each day through sweat compared to the average sedentary person. Therefore, greater sodium intake may be necessary to replace sodium losses and keep blood sodium levels within a normal range.

Implications for Health and Fitness Professionals

While this new research raises some interesting questions, it will take years of follow-up studies to clarify the scientific and practical implications. More often than not, it is advisable to take a wait-and-see approach with any research that is new and exciting to determine if the results can be replicated under both similar and different circumstances. In the meantime, health and fitness professionals who work with athletes and active adults should continue to follow the latest guidelines on sodium and fluid intake during exercise, while closely monitoring their clients and educating them about hydration and electrolytes.