Study: Your Clients’ Attitudes About Exercise Determine How Successful They Will Be 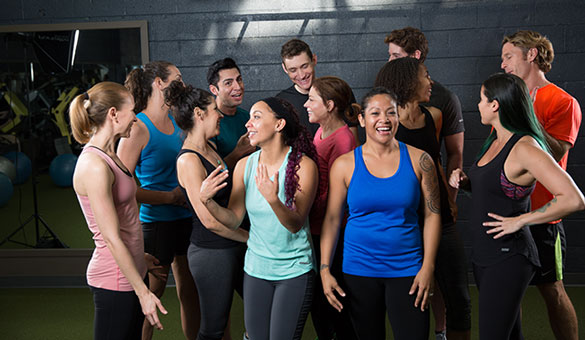 Many of your clients come to you to start fitness programs because they want to lose weight. If they don’t lose as much weight as they would like, or they don’t start losing the weight fast enough, they may become discouraged or feel like failures, and ultimately stop exercising.

And then, months or a year later, they do the same thing again—either on their own or with another trainer—creating a vicious cycle that fails to consider what might be leading to their inability to stay motivated for longer periods of time, says Michelle Segar, director of the University of Michigan's Sport, Health, and Activity Research and Policy Center.

In a new study published in the journal BMC Public Health and funded by the National Cancer Institute, Segar and co-investigators analyzed what women say makes them feel happy and successful, and how their expectations and beliefs about exercise foster or undermine those things. The study involved eight focus groups among white, black and Hispanic women, ages 22 to 49, who were either categorized as “high active” or “low active.”

“A new understanding of what really motivates women might make an enormous difference in their ability to successfully incorporate physical activity into their daily routine—and have fun doing it,” explains Segar, who is also a researcher at the University of Michigan’s Institute for Research on Women and Gender.

Interestingly, the researchers discovered that both active and inactive women report the same ingredients for feeling happy and successful:

Conversely, the study also found that for inactive women, their beliefs and expectations about exercise actually thwarted the things that make them feel happy and successful. For example, inactive women often believe “valid” exercise must be intense, yet they want to feel relaxed during their leisure time. Additionally, they feel pressured to exercise for health or to lose weight, yet during their leisure time they want to be free of pressures.

Researchers also discovered that the inactive women were often unrealistic in their expectations about how much, where and how they should be exercising, which meant they were unlikely to be successful in reaching their goals.

“The direct conflict between what these low-active women believe they should be doing when they exercise, and their desire to decompress and renew themselves during leisure time, demotivates them,” explains Segar. “Their beliefs about what exercise should consist of and their past negative experiences about what it feels like actually prevents them from successfully adopting and sustaining physically active lives.”

While the findings about happiness and success seemed to hold true for both groups in the different demographics, low-active women held distinctly different views than high-active women about exercising.

“We’ve all been socialized to exercise and be physically active for the past 30 years,” says Segar. “The traditional recommendation we’ve learned to believe is that we should exercise at a high intensity for at least 30 minutes, for the purpose of losing weight or improving our health. Even though there are newer recommendations that permit lower-intensity activity in shorter durations, most people don’t know or even believe it.”

This more traditional message has worked for a small minority of the population, but more generally it has failed to increase population physical activity, she says.

“This traditional approach to exercising might actually harm exercise motivation. Our study shows that this exercise message conflicts with and undermines the very experiences and goals most women have for themselves,” she said.

The exceptions found in the study were among the more active participants, who held more flexible views of exercise. They expressed that it “was not the end of the world” if they had to skip exercising once in awhile. They made exercise more of a “middle priority,” which took the pressure off and left room for compromise when schedules and responsibilities did not permit planned exercise to occur.

The high-active women seemed to have more positive feelings from exercising, in contrast to most of the low-active women, who, in general, tended to dread the very idea of it.

Practical Ways to Help Your Clients Reframe Their Views of Exercise

So, what does this research mean for your clients and how can use it to help them maintain their motivation to be active?

“There are important implications from this study on how we can help women better prioritize exercise in their day-to-day lives,” Segar says. “We need to reeducate women that they can move in ways that will renew instead of exhaust them, and more effectively get the message across that any movement is better than nothing. To increase motivation to be physically active, we need to help women to want to exercise instead of feeling like they should do it.”

Here are some ways to help your clients, particularly your female clients, reframe their views about exercise and find activities that they enjoy:

While most of your clients likely site time as their biggest roadblock to being active, their mindset is more likely to blame. Helping your clients identify and examine their attitudes about exercise can go a long way toward helping them get past the negative mindsets that may be hindering their efforts.