Study: How to Help the Picky Eaters in Your Life 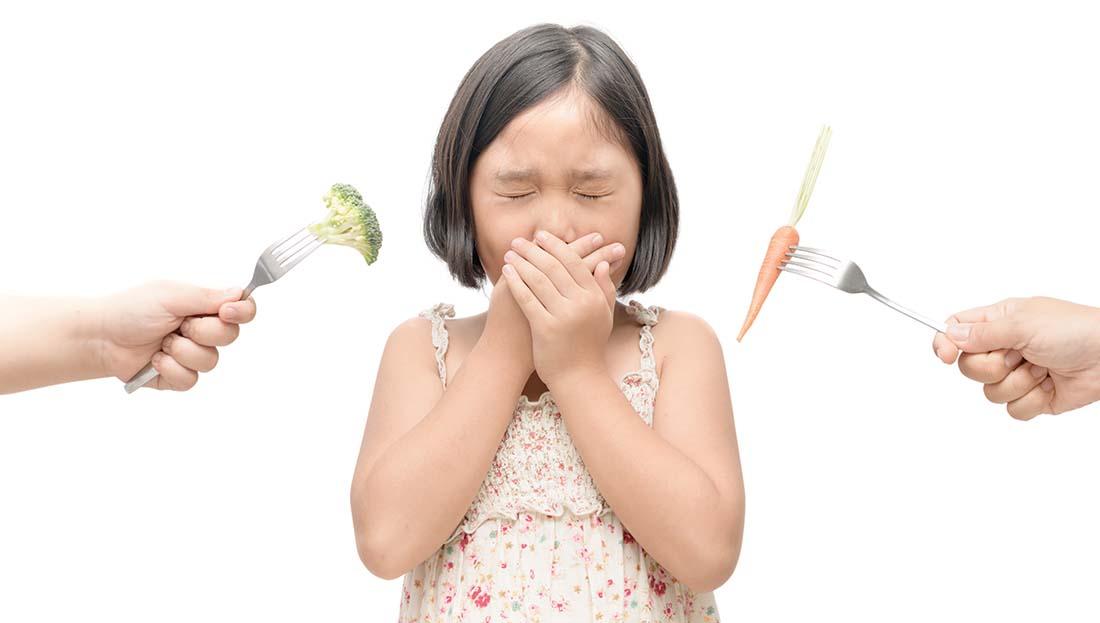 When it comes to helping picky eaters expand their palates, positive approaches will likely be more effective than negative or coercive strategies. These are the findings of a large national survey that included adults who had struggled with picky eating habits as children. Respondents overwhelmingly said they benefitted more from positive and encouraging strategies their parents used than forceful or coercive approaches.

The research, led by a team at Duke Health, was conducted among a generation of people who struggled with something called food avoidance. In 2013, food avoidance was identified as a psychiatric condition called Avoidant/Restrictive Food Intake Disorder (ARFID).

The researchers said their findings, which were published online in the International Journal of Eating Disorders, provide guidance for both families and behavioral health professionals for developing best practices to deal with extreme food aversions.

When picky eating is severe, it is diagnosed as ARFID. The condition is characterized by health problems such as weight loss and nutritional deficiencies and it can also lead to social and emotional problems when mealtimes become a source of shame, friction and/or conflict.

“It’s not surprising that positive approaches were favored, but it is surprising how overwhelming that position was among this group of adults,” says Nancy Zucker, PhD, professor in Duke’s Department of Psychiatry and Behavioral Sciences. Zucker was co-senior author on the study with Guillermo Sapiro, PhD, professor of electrical and computer engineering at Duke’s Pratt School of Engineering.

Zucker, director of the Duke Center for Eating Disorders, says the broad consensus is validation for the current treatment approach that emphasizes positive interactions: “It is robust confirmation for what had been out there in the literature and reinforces the concept that children feeling forced or pressured to eat is not helpful.”

The study was launched more than a decade ago as severe food avoidance was gaining attention and research into the disorder was limited. The online survey was aimed at adults who self-identified as current picky eaters to help understand their perceptions and experiences.

More than 19,200 people were included in the survey; 75% were female and 25% were male, and 89% were white. Respondents were asked to describe food presentation strategies used by their parents or caregivers that they found to be helpful or not helpful in increasing food variety.

Survey participants were subsequently classified as either likely having an ARFID diagnosis or not, based on their degree of impairment from food avoidance. Those who reported that eating problems led to significant weight loss, nutritional deficiency, interference with job functioning and/or interference with social relationships were categorized as likely having ARFID.

Interpreting the narrative responses from the huge cohort of participants created a logistical challenge, which was solved with the use of sophisticated artificial intelligence tools. Using a computational tool to characterize the perceived helpfulness of parent feeding strategies, the researchers applied an algorithm to interpret the meaning and/or sentiment of survey responses to characterize them as helpful or not helpful.

“From a technical perspective, this study used an AI application that understands language, not just words and sentences, but concepts of paragraphs, which was imperative here,” says J. Matías Di Martino, PhD, co-lead author with doctoral student Young Kyung Kim. Both are in Duke’s Department of Electrical and Computer Engineering. “By getting the positive and negative emotions, it enables us to analyze the comprehensive memories of nearly 20,000 people.”

The researchers found that 39% of the themes regarding helpful strategies mention a positive emotional context, such as using food to teach cultural or nutritional lessons, being flexible about the approach to food, providing plenty of safe foods, helping with food preparation or presenting foods from specific food groups.

In addition, 40% of the helpful comments noted the importance of structure around eating. Clearly defined expectations around eating were deemed to be helpful in the context of distinguishing between feeling “forced” vs. being asked to do something.

While positive and encouraging strategies were perceived as helpful in improving attitudes toward food and minimizing social discomfort around eating for the participants in this study, many adults still struggled with a degree of food avoidance and restriction. The researchers note that parents are perceived as having a positive impact despite their children’s food avoidance persisting into adulthood.

The researchers explain that survey participants clearly found some foods aversive, not merely unpleasant. This likely intensified their feeling of being trapped and made to do something disgusting if they were asked to eat that food.

“To our knowledge, there is no published research that identifies effective feeding strategies for those with ARFID,” Zucker says. “Figuring out the best way to feed a child with severe food avoidance can be exhausting and stressful for parents, so providing guidance is essential to improve the social and emotional eating environment for their children and reduce the distress that both parents and children have at mealtimes.”

Most of us know (or maybe even live with) a picky eater. In fact, while many of your clients may be trying to eat more healthfully, they may also struggle to feed resistant family members who would prefer to stick to their processed favorites rather than replace them with fresh, whole vegetables and fruit. For many parents, preparing two meals is not uncommon, nor is using threats and rewards to get their kids to try new foods.

As this study shows, using threats and coercion is not a particularly effective approach. Natalie Muth, MD, MPH, RDN, is a pediatrician and author of several books, including The Picky Eater Project and How to Raise Healthy Eaters. Muth encourages parents to take a more low-key approach to helping their kids try a broader range of foods. Some of her strategies include modeling healthy and adventurous eating, keeping regular and structured meal and snack times (free of distractions and devices!) and including at least one food at meals and snacks that a child likes. She also urges parents to stop offering separate meals or snacks if their kids refuse to eat what is offered.

It’s also important to remind your clients that it may take as many as 15 to 20 attempts at eating a particular food for a child to develop a taste for it. The lesson here is to not give up—it may take time, but repeated exposure may make a previously rejected food more appealing. And, as the participants in this study made clear, taking a positive approach to a child’s food challenges is far more beneficial than any negative tactic one might be tempted to employ. Help your clients remember that, although they may encounter resistance (and maybe even some tears) from family members, making healthy food choices for themselves and their families is always worth the effort.