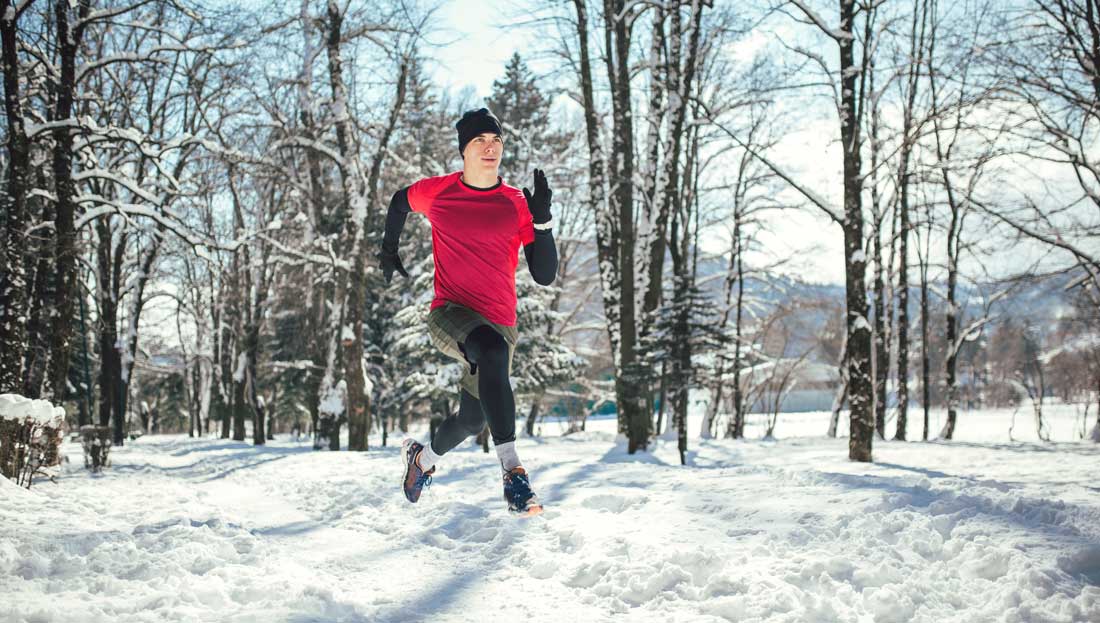 In many regions across the United States, cold temperatures coupled with snow and ice can pose a number of significant challenges to outdoor activity and exercise during wintertime, especially for older adult and clinical populations. Indeed, wintertime environmental conditions place considerable stress on the cardiovascular, respiratory and thermoregulatory systems. For instance, heavy snowfall, cold temperatures and low atmospheric pressure during the winter months have been associated with increased adverse cardiac events (Janardhanan et al., 2010). Additionally, the presence of snow and ice on the ground throughout the winter months increases the risk of slips and falls. This article outlines strategies for helping your clients perform outdoor wintertime activities safely and effectively.

Cold air is commonly dry, and endurance exercise results in a loss of water and heat from the lower respiratory tract (Sue-Chu, 2012). Air must be warmed to body temperature and brought to 100% relative humidity before entering the alveoli. This process, known as conditioning, is done by the respiratory tract, beginning with the nose and mouth. By the time air reaches the trachea it has been warmed to body temperature. This is important as it helps prevent declines in core body temperature. At the same time, air is moistened to 100% humidity before reaching the alveoli. This prevents the cell lining of the passageway from drying out. The burden of the lower respiratory tract to condition the air is much greater for winter outdoor activities when compared to summer outdoor activities (Sue-Chu, 2012). The colder and drier the atmospheric air, the harder the respiratory tract has to work to warm and humidify this air.

During exercise, as pulmonary ventilation increases, inhalation switches to the mouth (Sue-Chu, 2012). The repeated exposure to cold, dry air with winter outdoor exercise may cause airway injury and inflammation (Sue-Chu, 2012). The best way to limit this possibility is to take preventive measures. Here are two strategies.

At rest, normal core body temperature is approximately 98.6°F (37°C). Ambient temperatures lower than this can induce thermoregulatory responses in the body, preventing heat loss. The first physiological line of defense is vasoconstriction of the peripheral blood vessels (Nimmo, 2004). Cutaneous cold receptors are triggered by the ambient cold temperature activating the sympathetic nervous system. The sympathetic nervous system, which regulates vascular tone, responds to the cold temperatures by vasoconstriction. As a result, the blood is restricted to the core, dramatically reducing heat loss from the skin. Cold temperatures activating the cutaneous cold receptors also trigger the sympathetic nervous system to release a hormone called norepinephrine. Norepinephrine elevates the body’s metabolic rate, which enhances heat production, a mechanism called chemical thermogenesis.

In addition to the initial vasoconstriction and chemical thermogenesis, metabolic heat production is increased by the muscles in the act of shivering. Shivering is the involuntary shuddering contractions in skeletal muscle activated by the hypothalamus in the brain. This is an effective thermoregulatory response in increasing body temperature because muscle activity produces large amounts of heat.

Clothing is designed to protect the body from the environment. Protection can be achieved by the prevention of cooling and balance of appropriate temperature levels. During exercise in hot and cold extremes, a major concern is the dissipation of heat production from muscular activity (Gavin, 2003). The main role of fabric is to add a layer of insulation to impose a barrier for heat transfer and evaporation from the skin. As ambient temperatures decrease, more clothing is required to maintain core temperature (Gavin, 2003).

Ideal cold-weather clothing maintains the thermal balance of the user in extreme temperature conditions despite the level of activity. During exercise, this balance is difficult to obtain due to the fluctuation of heat produced by the body. Imbalances can possibly result in hypothermia, overheating and discomfort. Proper cold-weather clothing should reduce sweat accumulation during exercise, lower the probability of post-exercise chill and eliminate thermal discomfort (Bakkevig and Nielsen, 1995).

When selecting clothing for dry, cold conditions, urge your clients to choose fabrics that block air movement but allow water vapor to escape when sweating takes place. Cold-weather clothing commonly consists of multiple layers of insulation textiles and waterproof fabric for the outer shell. The under textiles are a complex combination of air and fibers, working to retain heat and transfer moisture when condensation exists on the skin at high levels.

In a study by Yoo and Kim (2012), the researchers examined the efficiency of different methods for layering cold-weather clothing by having eight male participants enter a cold chamber while wearing different garments; the men were seated for 10 minutes and then completed 20 minutes of treadmill exercise. The study focused on five different garments layered in two ways: all separate layers and a combined layer between the outer most insulation and the shell. The under layers for all the subjects included one sleeveless polyester knit undershirt, three long-sleeved polyester fleece shirts, and an outer waterproof breathable jacket for the shell. A physiological analysis revealed that combining an insulating garment with the outer shell enhances moisture transfer and diminishes the accumulation of condensation within the layer system, resulting in 33.8% less sweat production (Yoo and Kim, 2012).

Here are two key clothing strategies for outdoor exercise during the wintertime:

Who Is Most at Risk for Cold Weather−induced Cardiac Events?

The physiological demands that cold exposure inflicts on the human body tend to be more detrimental for older adults and clinical populations. For example, classic research demonstrated that the incidence of acute myocardial infarctions was more prevalent in the wintertime for the geriatric population (Dunnigan, Harland and Fyfe, 1970). Additionally, it has been demonstrated that risk of mortality from heart disease for older adults is highest at temperatures below 50°F (10°C) (Analitis et al., 2008). Moreover, it has been reported that mortality from heart disease is estimated to increase by approximately 1% per 1.8°F (1°C) drop in temperature (Näyhä, 2002). The risk of a cardiac event in cold weather appears to be greatest for those individuals also unaccustomed to strenuous activities, such as snow shoveling.

If you or your clients live in areas where snow shoveling is a fact of daily life in the winter, offer them the following strategies to reduce the likelihood of a cardiac event during snow shoveling:

Slip and Fall Prevention During Winter

It has been previously reported that winter slips and falls account for 300,000 serious injuries and 20,000 deaths a year in the United States (National Association of State Departments of Agriculture, 2013). These statistics underpin the importance of being prepared for outdoor activity during winter months.

The following strategies can help reduce the likelihood of your clients experiencing slips and falls: