ACE-SUPPORTED RESEARCH: How Long Should You Rest Between Sets? 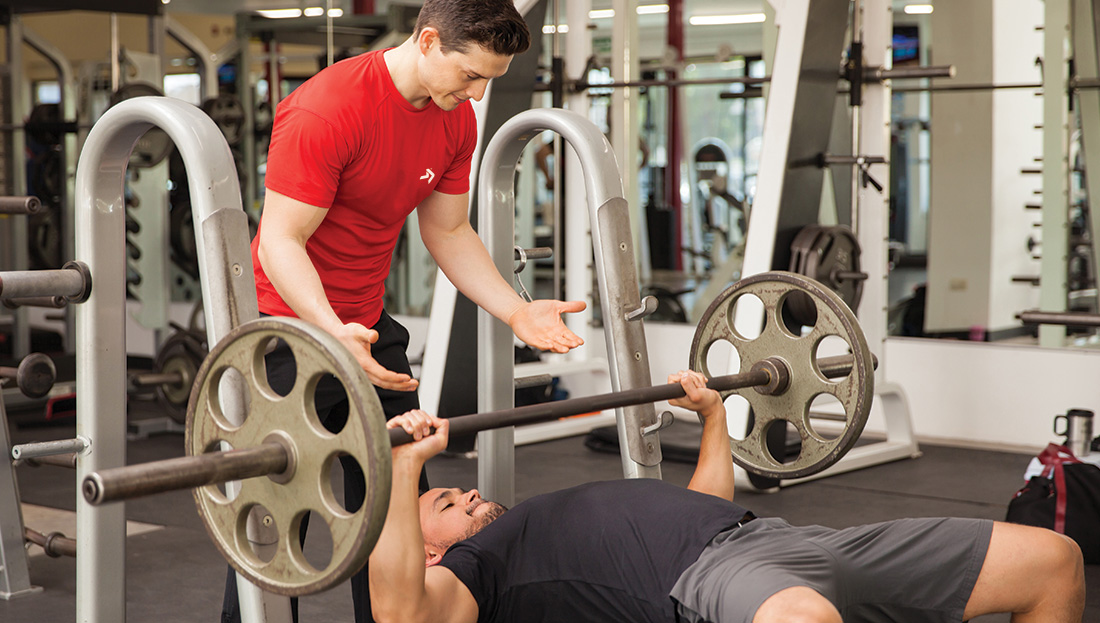 This ACE-supported study explores the impact of one-minute and three-minute recovery intervals on the performance of upper- and lower-body exercises (i.e., the chest press and leg press). The researchers found that three-minute rest intervals are better for female lifters who want to optimize strength and/or muscle building with low-to-moderate intensity resistance training. 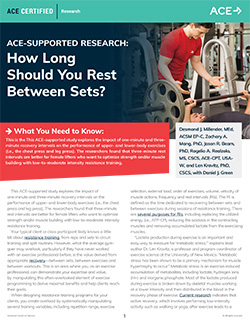 Download and print the ACE-SUPPORTED RESEARCH: How Long Should You Rest Between Sets?

Your typical client or class participant likely knows a little bit about resistance training, from reps and sets to circuit training and split routines. However, what the average gym-goer may overlook, particularly if they have never worked with an exercise professional before, is the value derived from appropriate recovery—between sets, between exercises and between workouts. This is an area where you, as an exercise professional, can demonstrate your expertise and value, by manipulating this often-overlooked element of exercise programming to derive maximal benefits and help clients reach their goals.

When designing resistance-training programs for your clients, you create overload by systematically manipulating several training variables, including repetition range, exercise selection, external load, order of exercises, volume, velocity of muscle actions, frequency and rest intervals (RIs). The RI is defined as the time dedicated to recovering between sets and between exercises during sessions of resistance training. There are several purposes for RIs, including replacing the utilized energy (i.e., ATP-CP), reducing the acidosis in the contracting muscles and removing accumulated lactate from the exercising muscles.

“Lactate production during exercise is an important and easy way to measure for ‘metabolic stress,’” explains lead author Dr. Len Kravitz, a professor and program coordinator of exercise science at the University of New Mexico. “Metabolic stress has been shown to be a primary mechanism for muscle hypertrophy to occur.” Metabolic stress is an exercise-induced accumulation of metabolites, including lactate, hydrogen ions (H+) and inorganic phosphate. Most of the lactate produced during exercise is broken down by skeletal muscles working at a lower intensity and then distributed in the blood in the recovery phase of exercise. Current research indicates that active recovery, which involves performing low-intensity activity such as walking or yoga, after exercise leads to a faster clearance of this accumulated blood lactate than a passive (resting) recovery.

Historically, it was believed that shorter RIs were better for continuously building larger muscles because they increased levels of anabolic hormones, such as growth hormone, insulin growth factor 1 and testosterone. Current evidence, however, indicates that short and long RIs are equally effective for achieving gains in muscular size.

Notably, as you know, the quality of a client’s training may decline if their RIs are too short. This may result in declining power production, strength output, repetition number and total volume of your clients’ workouts. It’s important to note that, in research, total volume lifted is calculated as the product of Sets x Repetitions x Load. And, studies have demonstrated that higher training volumes are essential for long-term resistance-training outcomes in strength and hypertrophy.

A piece of ACE-supported research conducted by Len Kravitz, PhD, and a team of researchers at the University of New Mexico – Albuquerque explored one element of in-session recovery by looking at the impact of varying RIs on the performance of upper- and lower-body exercises (i.e., the chest press and leg press). More specifically, the purpose of this study was to measure the effect of 1-minute (SHORT) and 3-minute (LONG) RIs on total volume lifted, fatigue and lactate production during low-to-moderate intensity [75% of ten-repetition maximum (10-RM)] resistance training among trained female lifters.

Fourteen healthy, resistance-trained women (average age 23 years and average percent body fat of 21.7%) volunteered for this study. On average, participants had performed total-body resistance exercise two days per week for more than five years. Additionally, they all had experience doing the chest press and leg press exercises with variable intensities (i.e., 12 to 20 repetitions per set) and regularly performed failure sets (i.e., sets of resistance training to the point of “failure,” or when another repetition cannot be performed).

On their first visit, each participant’s 10-RM was determined for the chest press and leg press exercises, and they performed one failure set of each exercise to familiarize themselves with how that felt. In addition, height and weight data were collected and skinfold measurements were taken and used to estimate body density and body-fat percentage. The participants then returned for two more visits, one with SHORT RI trials and one with LONG RI trials.

During those subsequent visits, all participants performed the chest press and leg press with proper lifting technique, at the same cadence (e.g., two-second eccentric and one-second concentric following a metronome) and to exercise failure. For both trials, participants completed a five- to 10-minute self-selected dynamic warm-up, followed by two warm-up sets of 10 repetitions (50% of 10-RM and 60% of 10-RM) before completing four sets of the leg press or chest press exercises (to failure) at 75% of their 10-RM. There were five to seven days between trials, the order of which was randomized, and 30 minutes of rest between the chest press and leg press trials (within each session).

The main finding of this study is that the total volume lifted (the product of Sets x Repetitions x Load) for the SHORT RI session was significantly less than that seen in the LONG RI session for both exercises (Figure 1). 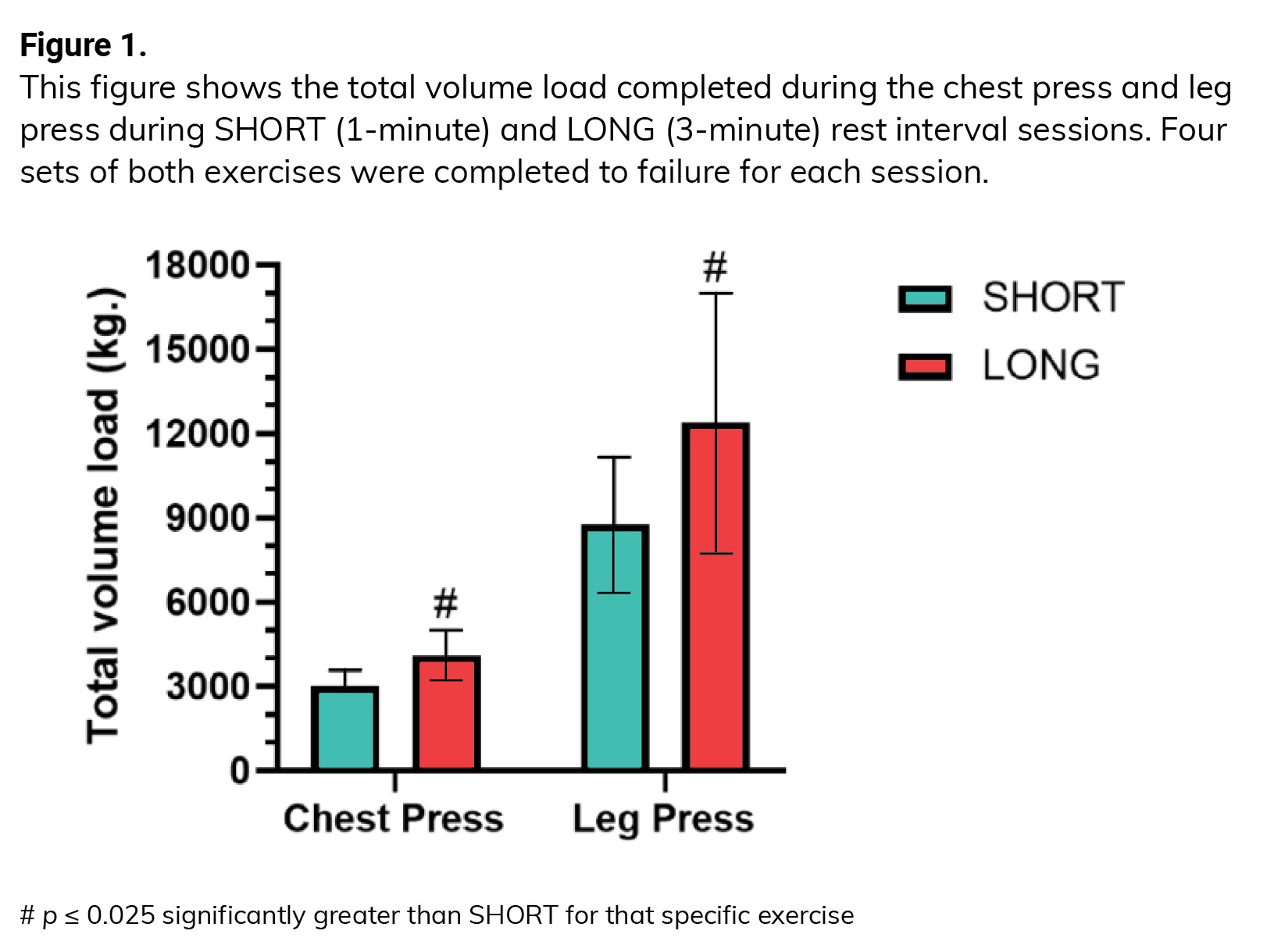 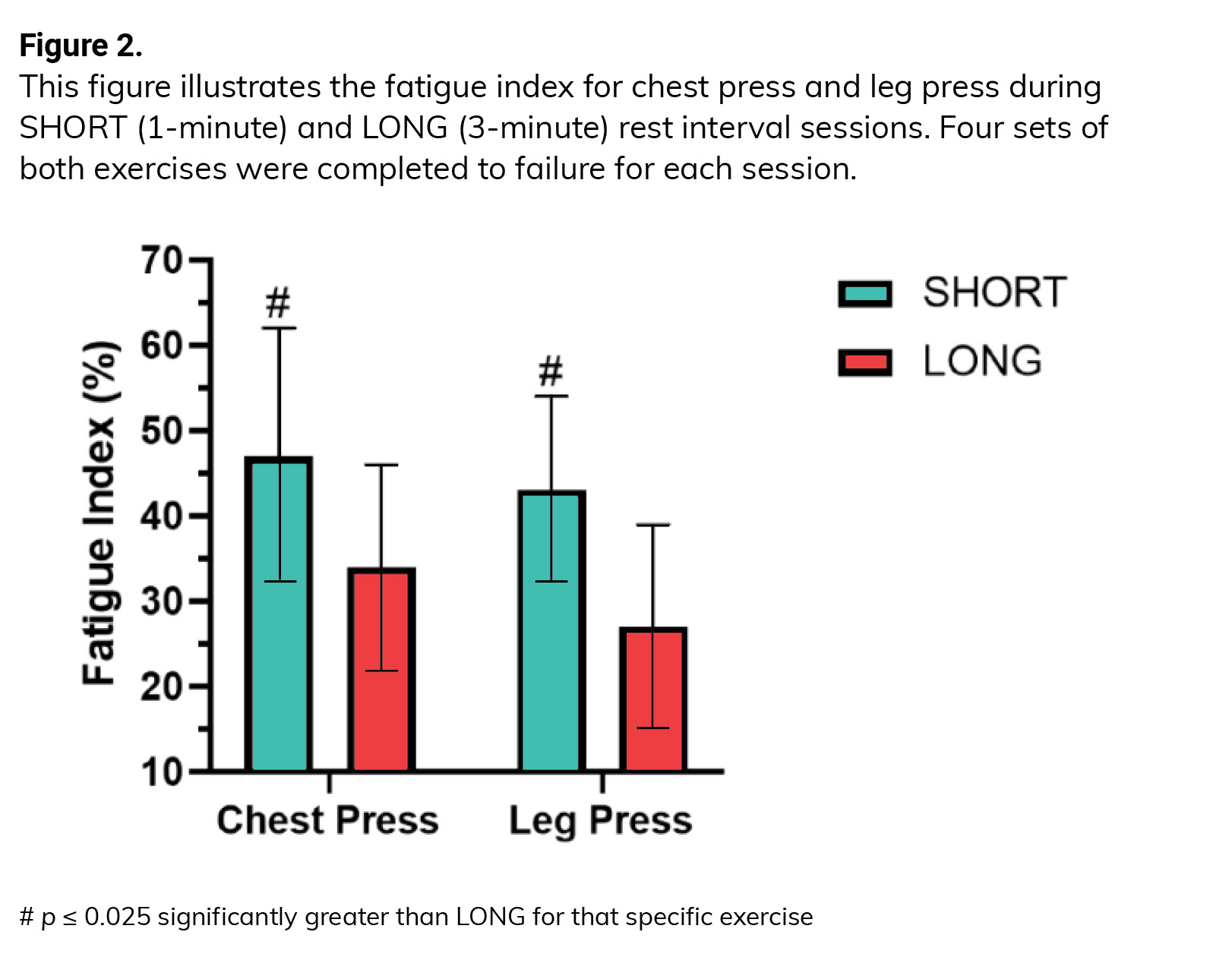 There was no significant difference in lactate production in the SHORT and LONG RIs for either the chest press or the leg press exercise (Figure 3). 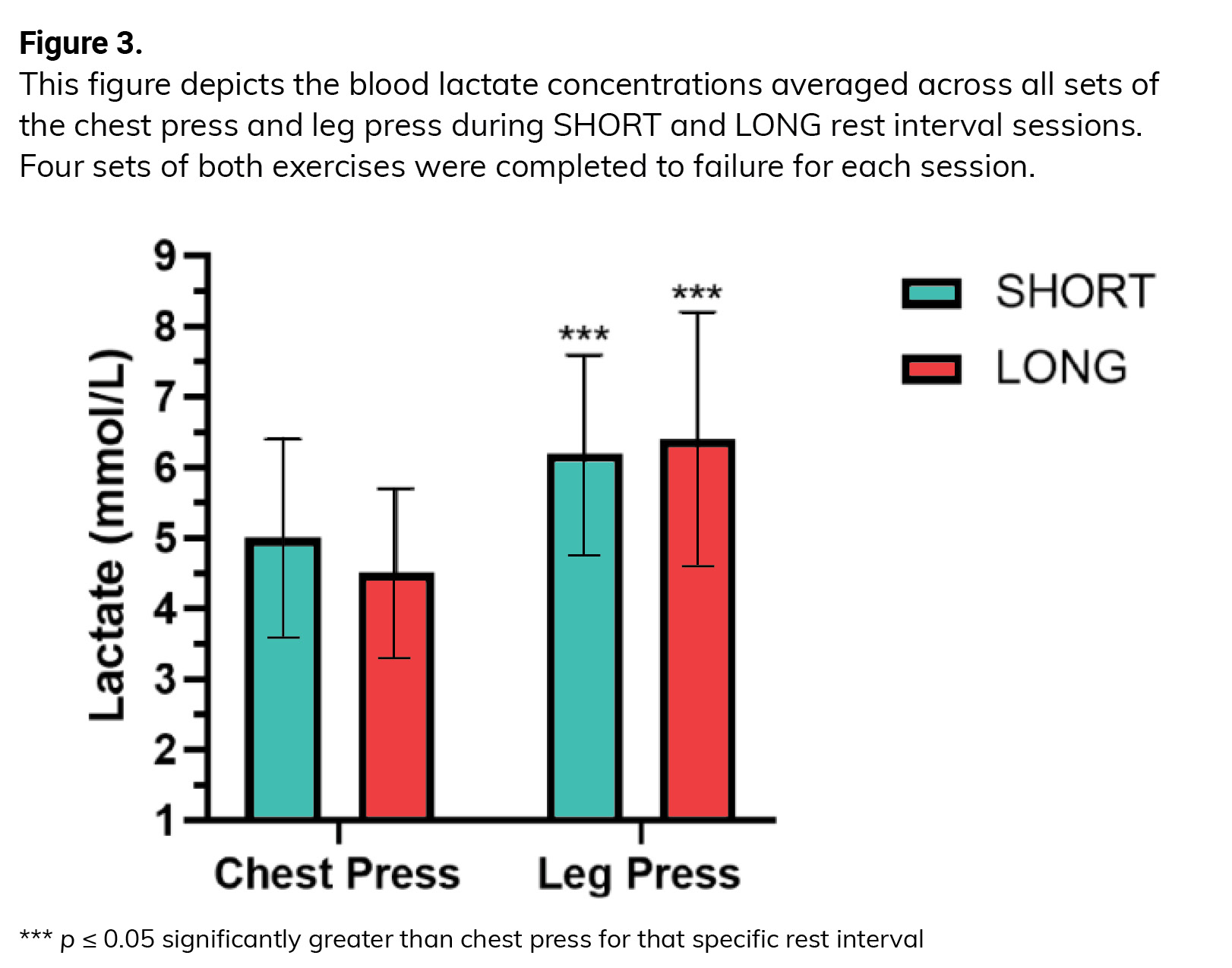 Regardless of the rest interval or exercise, the largest decline in the number of repetitions that participants could complete occurred consistently between the first and second set. Sets three and four seem to reflect a plateau in terms of the number of repetitions (Figure 4). However, this may be a finding that is specific to the intensity of exercise (75% of the 10-RM) and the sample population (trained females) of this study. 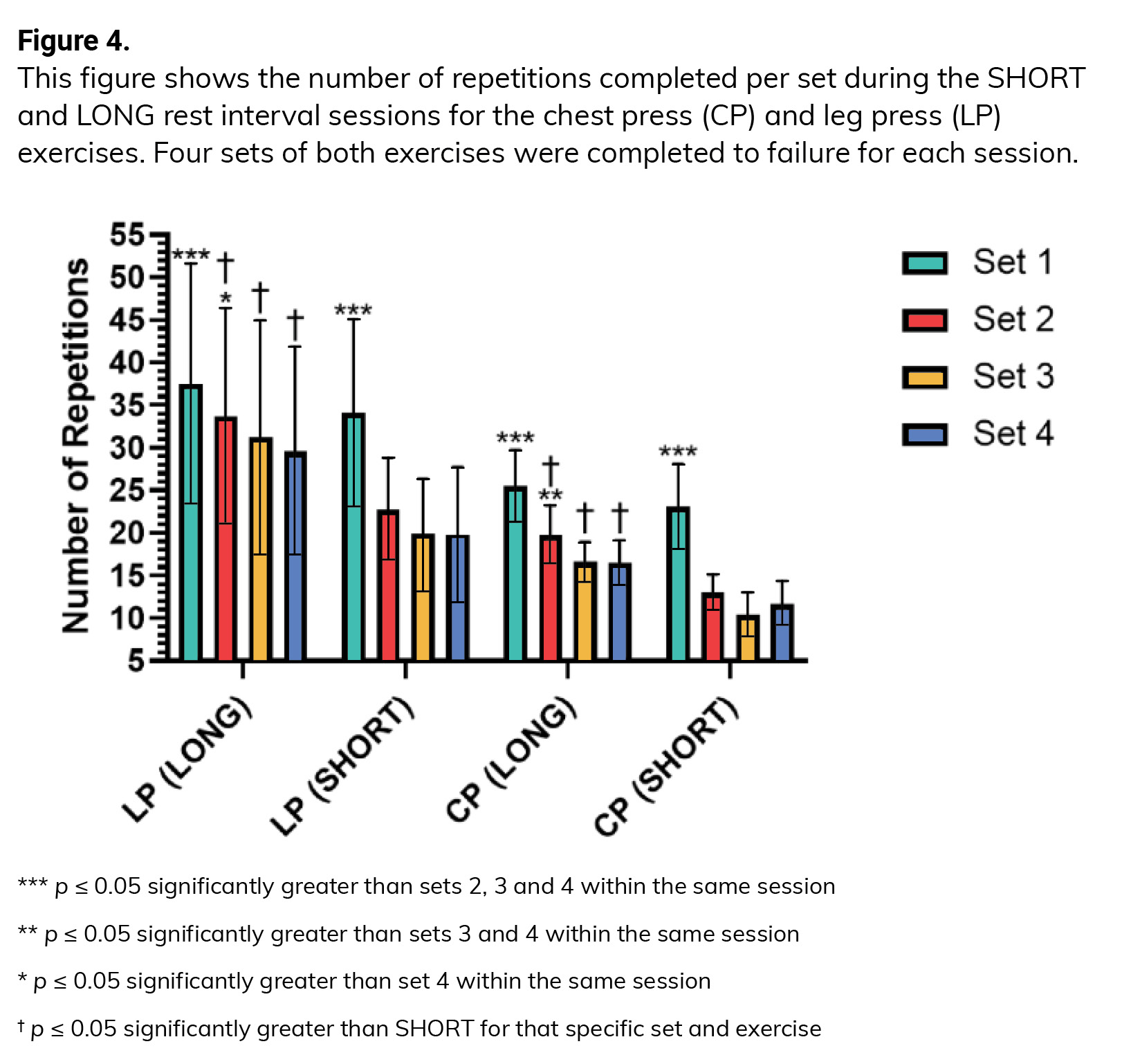 Finally, the researchers concluded that the participants experienced fatigue in the upper- and lower-body at about the same rate when the exercises were performed at a low-to-moderate intensity. In addition, the rate of fatigue was slower when using three-minute rest intervals when compared to the one-minute rest interval.

Based on the results of this study, the researchers concluded that three-minute rest intervals are better for female lifters who want to optimize the total volume lifted with low-to-moderate intensity resistance training. “Therefore,” says Dr. Kravitz, “if hypertrophy and/or strength is a priority goal for female clients, personal trainers should incorporate three-minute rest intervals between sets during multiple-set training sessions.”

This study was first published in the peer-reviewed International Journal of Exercise Science.