Don’t Call it a Comeback: Moderate-intensity Exercise Is Still Effective 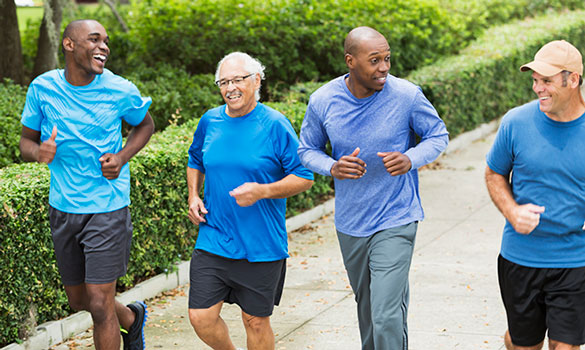 With all the hype and media attention given to high-intensity interval training (HIIT) over the past few years, you’d think everyone was doing it—and maybe they are. If they’re not, they may not be doing anything, believing if they’re not killing themselves during a workout, they’re not really gaining any benefits.

“Unfortunately, as can frequently happen in the fitness industry, the research tends to be oversimplified or misrepresented by the consumer media, leaving the general population misinformed,” says Jonathan Jordan, fitness blogger, nutrition coach, corporate wellness consultant and personal trainer at Equinox in San Francisco, Calif. “The industry has a tendency to be all or nothing in favor of the ‘coolest, most cutting-edge’ trend. It also has a tendency to take research findings from a very specific population—performance athletes, for instance—and apply it to the general population of amateur gym-goers or desk-workers. It is unsafe and ineffective to ‘kill it’ at high-intensity capacity for every workout.”

There seems to be a mindset among some in our industry that our clients must be “beaten to a pulp” and experience delayed-onset muscle soreness (DOMS) after every workout, or they’re not getting results—or their money’s worth. This mindset has pervaded the general exercise population, as well.

But here’s the thing: Recent studies show that moderate-intensity activity still has many benefits.

What the Research Says About Moderate-intensity Exercise

A randomized six-month study with 150 participants at Duke University Medical Center suggests that brisk walking is more effective than jogging when it comes to controlling blood glucose levels in people with prediabetes. Participants were assigned to one of four groups, one of which included diet changes and exercise (DPP—see below) and the others being exercise-only. The groups and resulting conclusions are broken down as follows:

The researchers suggest that the greater improvements in glucose tolerance with moderate-intensity exercise may be due to it burning off fat in the muscles, relieving the block of glucose uptake by the muscles. This is important, because muscle tissue is one of the primary storage sites for glucose following a meal.

There are many studies on moderate physical activity and heart health, including:

Some researchers are even questioning current guidelines for exercise. While the current recommendation is to get at least 150 minutes of moderate-to-vigorous physical activity a week, a review of the literature suggests that as little as half this amount may still lead to many health benefits. Researchers Darren E.R. Warburton, Ph.D., and Shannon S. Bredin, Ph.D., of the Cardiovascular Physiology and Rehabilitation Laboratory, University of British Columbia, Vancouver, Canada, report that there is compelling evidence that health benefits can be accrued at a lower volume and/or intensity of physical activity and that these health benefits are seen in both healthy and clinical populations.

Two reviews published in the British Medical Journal echo this assertion. Study authors believe that professionals and guidelines should focus more on getting the sedentary moving—at any amount—rather than trying to get everyone meeting current guidelines.

Case in point: Review authors cite a study of more than 250,000 American adults, ages 50-71, which found that less than one hour of moderate physical activity a week or 20 minutes or more of vigorous physical activity less than once a week was associated with a reduced risk of all-cause mortality of 15% and 23%, respectively.

Likewise, a review of six studies found a 19% decrease in the risk of all-cause mortality among people walking between one and 74 minutes a week compared with people doing nothing.

Researchers at the Georgia Institute of Technology (GIT) in Atlanta, Ga., do not believe that current recommendations should be scrapped, but they do feel that focusing on the 150 minutes a week “may mean that the benefits of lesser amounts of exercise are overlooked.” They feel the message should focus more on reducing sedentary time and increasing light activities, which “may prove more realistic and pave the way to more intense exercise.”

“We are not proposing that the 150-minutes-a-week standard be abandoned,” GIT researchers write. “Rather, our purpose is to remind colleagues that a broad perspective to counselling is already embedded in the guidelines and that a whole data approach for older sedentary patients may help them move towards the recommended activity levels.”

What’s a Health and Fitness Pro to Do?

Beware of allowing current trends to dictate how you train. Go back to the basics, including exercise progression. And keep in mind that HIIT isn’t for everyone. You must take the whole person into consideration.

“What we must remember is that it takes time to adapt to physical activity,” says Jonathan Dugas, Ph.D., director of health research for Vitality in Chicago, Ill., “and doing too much, too soon, can increase the likelihood of an acute injury. It’s not the same for everyone, and it depends on one’s current fitness level, but a gentle progression to being more active is the best and most appropriate technique.”

“People are motivated by their success, not by failure,” adds Samantha Clayton, former Olympian and senior director of sports performance and fitness for Herbalife Nutrition. “As a trainer, it’s important to pride yourself on clients completing a session and feeling good about it, as opposed to making it so intense they fail.”

Clayton goes on to say that she feels everyone can benefit from incorporating low- to moderate-intensity sessions into their training programs. “As a former athlete, I can share that even the professionals vary their workouts to ensure that the body is not constantly put under excessive exercise stress. Understanding that getting results and promoting change in the body is all about finding balance, can really help people find the intensity level that's best for them.”

If you’ve adopted the mindset that exercise must hurt in order to get results, the first step is work on transforming your own philosophy. Then begin having a dialogue with clients to help educate them about the importance of adding moderate-intensity activity to their days and switching up the level of intensity of their workouts. It’s all a part of evolving as a health and fitness professional and building confidence in your clients.

Cardiovascular Training for Clients Who Have Obesity: A Trainer’s Guide to Analysis, Design and Execution [Online Course]