What Comes After Planks? 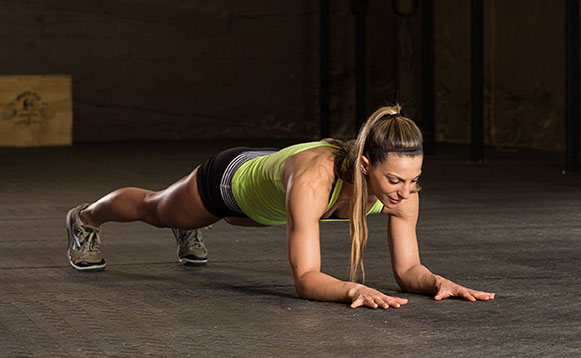 Static planks are great, but they shouldn’t be considered a goal—they are a starting point. Life is movement and our training should prepare us to do just that. The current record for the longest time in a plank position is three hours seven minutes and 15 seconds. That is beyond difficult to be sure, but it’s also kind of pointless. It’s like a long cardiovascular training session in the form of a plank. If you can hold a plank for three hours, you aren’t necessarily getting any stronger—you can simply hold a plank for a really long time.

Here’s What You Need to Know

Whenever I am speaking on the topic of ab training, I always ask the audience, “What’s the purpose of planks?” I am usually met with silence, so I’ll ask the question again, this time letting them know that they are unlikely to offer an incorrect answer. Now, I start to get some responses, most of which are abstract and generic, even if they are correct, such as: “They teach full-body stability.” “They develop good core strength.” “They help prevent back pain.” O.K., but why do I want any of that?

What’s the purpose of having good core strength and full body stability? To do stuff! It’s not a complicated answer. We tend to overcomplicate and sometimes overthink things in fitness. Whatever you (or your clients) want to do—play a sport, play tag with your kids, compete in obstacle races or catch butterflies—you want to feel good when you do it and not have to worry about your body. The same is true for the stuff we all have to do, but may not really love to do (things like doing laundry and yard work or putting away groceries).

Thus, the ultimate purpose of planks is to get better at moving. It makes little sense then to have a core-strengthening program that focuses strictly on the absence of movement. This idea has gotten out of hand to the point where some people erroneously recommend doing only anti-rotation exercises to train rotation. Think about it this way: Sitting behind the wheel of a car that is motionless is not how you learn to drive.

This idea has become popular because some have ascribed to the idea that rotation is “dangerous.” In other news, life is dangerous, so you’d better train for it. Life will ask you to move quickly, randomly and correctly at some point to avoid injury. Proximal strength equals distal power. In other words, strength in the center gives you more powerful, controlled movements.

Keeping still forever in exercise is like staying in first grade forever. You learn planks to be able to do harder things. Planks are very effective for preparing you to do something harder than a plank.

A recent ACE ProSource article examined some of the reasons why planks are, in fact, a great core exercise. The purpose of this article is to take this concept a step further and give you a framework for thoughtfully (not randomly) adding movement into planks. You and your clients can use the following system for introducing movement into your plank training:

1.    Partner reactivity
2.    Move the torso (center of mass)
3.    Move an extremity
4.    Translate the body through space/ambulate
5.    Combinations (combine elements of steps 1 through 4 to make new variations)

One important concept that flows through all of these examples is that you can vary the speed of movement to manipulate the intensity of any moving plank. Also, just about any plank variation will work with your choice of upper-body support position (i.e., elbow or hand).

Sample Exercise: Side Plank in Suspension Trainer with Impulse Taps


This plank variation adds a stability challenge by having the feet in a suspension trainer, which is then further progressed by having a partner provide reactive taps to the straps.

HOW TO DO IT: Get into a side plank position in a suspension trainer with the top leg in front. With a lot of the weight on the feet (where there is the most instability), this variation can be a terrific indicator of the ability of the core muscles to absorb and control rapid and unpredictable forces while maintaining balance. (A real-world correlate would be when riding public transportation and there is a change in speed or when another passenger accidently bumps into you.) While holding the plank, the partner provides reactive taps to the straps or perhaps even to the body of the exerciser.

Move the Torso (Center of Mass)

This variation allows for movement of the torso, which is where the body’s center of mass is located, and trains the ability of the arms and leg to be stable with varying amounts of body weight shifting into and out of each limb.

This simple concept provides endless opportunities for plank variations by moving arm(s) or leg(s) in a wide variety of ways.

HOW TO DO IT: Get into a plank position. Lift a limb with control and shift the body weight over the remaining limbs that have ground contact. Lifting an arm is harder than lifting a leg; to lift a leg, keep the feet very close together to start rather than maintaining a wider base of support. The example here shows the most common variation—a leg lift—but this is really just a launching point for endless variations of arm and leg movements.

Translate the Body Through Space

Note: For a video demonstration of this exercise and others, along with details on how to form an excellent plank by using muscles of the entire body, check out Ross’s popular ACE video Plank School.

This plank variation builds on skills learned when moving both the limbs and the torso.

HOW TO DO IT: Get into a plank position at one edge of a mat. Begin to “walk” sideways on your elbows and feet until you reach the opposite edge of the mat. Return to the starting position. That’s one rep. Typically, most people’s form will begin to degrade after only three to five reps.

This plank variation combines multiple strategies discussed in this article: shifting the torso, moving the limbs and translating the body through space.

HOW TO DO IT: From a plank position, walk the feet forward in small steps. Keep the knees low but off the floor and walk them in as far as is comfortable and possible.

Wrap-Up
Remember, planks are great—they just shouldn’t go on forever. Once you master the skill of performing a plank, it is best to progress to a harder exercise rather than to keep performing this foundational exercise for longer amounts of time. For the majority of people, time is a precious commodity. This means that the time spent exercising must be spent performing the most valuable activities and exercises. And holding a plank for minutes at a time is ultimately a poor way to spend this valuable time when there are better options to more successfully prepare for the unpredictable nature of life’s movement demands. Life is movement, so train for it.