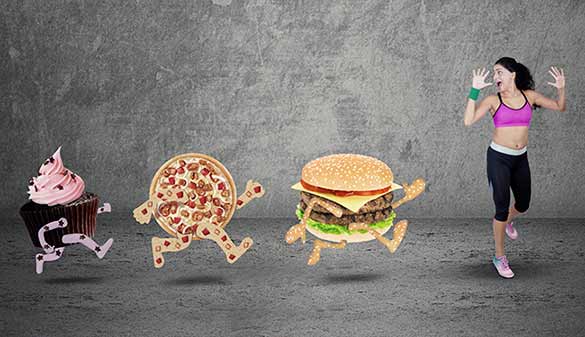 “You can’t outrun a poor diet.” We’ve all heard the expression—many fitness pros have probably said the very same thing to their clients—but exactly why is this true? According to a new study reported in the Cell Press journal Current Biology, exercise alone isn’t enough for the same reason people hit fitness plateaus—the body simply adapts. And this is true even when activity levels are increased—the human body adapts to higher activity levels, so that people don’t necessarily burn extra calories even if they exercise more.

These results, say researchers, suggest it’s time to rethink the effect of physical activity on daily energy expenditure. Even so, it’s important to keep reminding clients that exercise is essential to good health. “That’s the first thing I mention to anyone asking about the implications of this work for exercise,” says Herman Pontzer, Ph.D., of City University of New York. “There is tons of evidence that exercise is important for keeping our bodies and minds healthy, and this work does nothing to change that message. What our work adds is that we also need to focus on diet, particularly when it comes to managing our weight and preventing or reversing unhealthy weight gain.”

People who start exercise programs to lose weight often see a decline in weight loss (or even a reversal) after a few months. Large comparative studies have also shown that people with very active lifestyles have similar daily energy expenditure to people in more sedentary populations.

Pontzer says this really hit home for him when he was working among the Hadza, a population of traditional hunter-gatherers in northern Tanzania.

“The Hadza are incredibly active, walking long distances each day and doing a lot of hard physical work as part of their everyday lives,” Pontzer says. "Despite these high activity levels, we found that they had similar daily energy expenditures to people living more sedentary, modernized lifestyles in the United States and Europe. That was a real surprise, and it got me thinking about the link between activity and energy expenditure."

To explore this question further in the new study, Pontzer and his colleagues measured the daily energy expenditure and activity levels of more than 300 men and women over the course of a week.

“The most physically active people expended the same amount of calories each day as people who were only moderately active,” Pontzer says.

The researchers say it’s time to stop assuming that more physical activity always means more calories. Each person likely has a “sweet spot” for physical activity—too little and he or she is unhealthy, but too much and the body makes big adjustments in order to adapt.

Pontzer and his colleagues now plan to study how the body responds to changes in activity level. They’ll start by looking for other changes—for example, in immune function or the reproductive system—that might explain how the body adapts to greater physical demands without consuming extra calories.