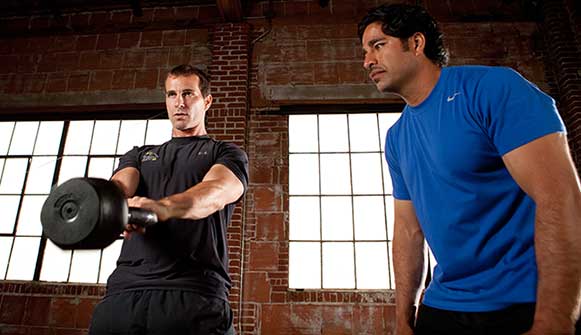 It’s tough to imagine a more archaic-looking piece of strength-training equipment. The kettlebell is seriously old school. Essentially a cannonball with a handle, iron kettlebells were first introduced in the 1700s by Russian strongmen who developed techniques of swinging and lifting the orbs as a way to build strength, balance, flexibility and endurance. As it turns out, the kettlebell must have been way ahead of its time. New groundbreaking research sponsored by the American Council on Exercise (ACE) demonstrates that kettlebell training significantly boosts aerobic capacity, while also improving core strength and dynamic balance.

To analyze the fitness benefits of kettlebell training, ACE, America’s Workout Watchdog, enlisted the research experts at the University of Wisconsin-La Crosse’s Department of Exercise and Sport Science to conduct a full-fledged training study. Led by John Porcari, Ph.D., Nick Beltz, B.S., and Dustin Erbes, B.S., the research team recruited 30 healthy, relatively fit male and female volunteers, ages 19 to 25. The subjects all had some experience with strength training and were randomly divided into two groups. Eighteen volunteers (9 male, 9 female) were put into the experimental group, while 12 others (6 male, 6 female) were used as the control group.

Kettlebells seem to spark a wide range of reactions, from diehard devotion to horror at the potential for injury if used improperly. What are your feelings about kettlebells? Do you use them with your clients? Share your thoughts and experiences in the comments section below.

Prior to testing, all volunteers participated in two kettlebell training sessions to learn correct form for each of the basic lifts used in the study. To establish a baseline of strength and fitness, all subjects underwent an extensive battery of tests. First, they participated in a modified kettlebell snatch test to assess aerobic capacity. The leg press, upright row and shoulder press were used to assess grip strength, core strength and muscular strength. Finally, flexibility and static and dynamic balance were tested and each subject’s body composition was determined using skinfold measurements.

After the exhaustive pretesting, the 18 volunteers from the experimental group began an eight-week training period. Twice a week, the subjects participated in an hour-long kettlebell class led by a pair of certified trainers. Each class began with a 5-minute active warm-up before moving on to 30 to 45 minutes of kettlebell exercises, including one- and two-handed swings, snatches, cleans, presses, lunges and Turkish get-ups. Each class concluded with a 10-minute cool-down period. At the beginning of the study, the trainers encouraged participants to use a kettlebell weight that felt manageable and then progress to heavier weights as they felt more comfortable with the movements.

Following the eight-week training period, the subjects’ strength and fitness were retested using an identical battery of assessments as was used in the pretesting.

“When most people think of resistance training, they don’t think of being able to increase the aerobic capacity,” says Dr. John Porcari, head of the University’s Department of Exercise and Sport Science. “Yet, we saw a 13.8 percent increase in aerobic capacity.”

The most dramatic increase in strength came in abdominal core strength, which was boosted by 70 percent. Meanwhile, dynamic balance (in the posterolateral direction) showed a significant improvement.

In all, compared to the control group, those subjects who completed the kettlebell training showed significant improvements in VO2max, leg press, grip strength, dynamic balance and core strength. Researchers saw no significant changes in body composition (body weight, sum of skinfolds and percent body fat) for either group over the course of the study. Similarly, there were no significant differences in HRmax, sit-and-reach, shoulder raise, trunk hyperextension, shoulder press or static balance in either group (Tables 1 and 2). 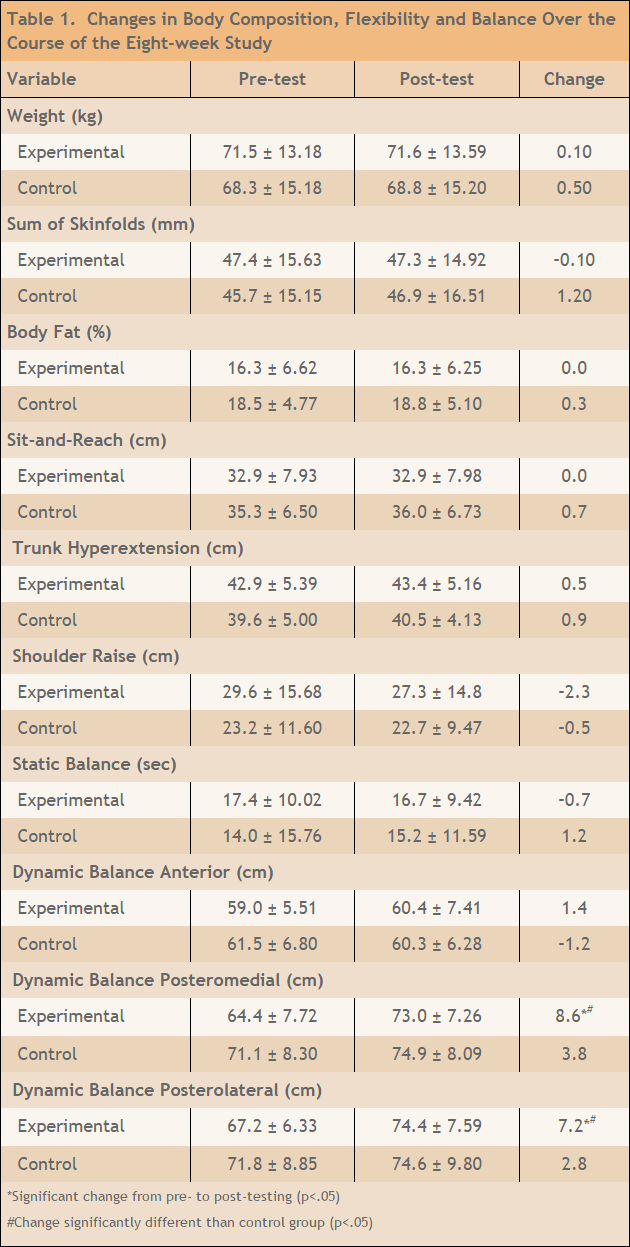 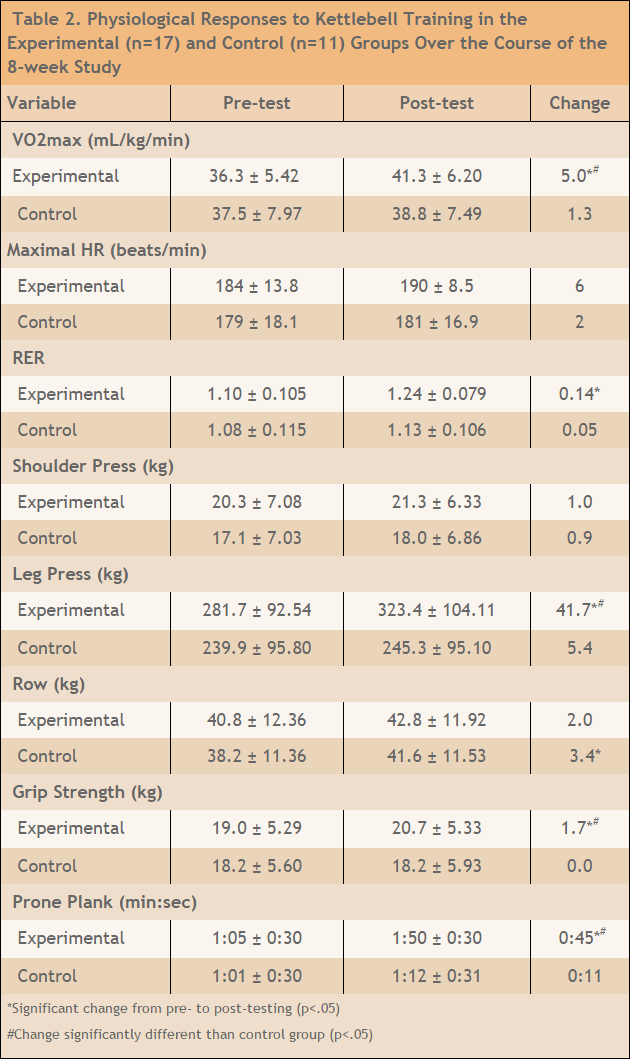 “It’s a hell great workout, but you really need to get proper instruction before you do it,” says Porcari. “Good form is key to avoiding injury.”

“Kettlebell training increases strength, which you’d expect, but you also get these other benefits,” says Porcari. “You don’t really do resistance training expecting to get an aerobic capacity benefit, and you don’t do resistance training and expect to improve your core strength, unless of course you’re specifically doing core-strengthening exercises. But with kettlebells you’re able to get a wide variety of benefits with one pretty intense workout.”

To put into perspective kettlebell training’s potential to increase aerobic capacity, Porcari says, “If I was to put someone on a running program, we would likely see a slightly higher, bigger improvement, but these results showed cardio improvements that would be better than a walking program and more in line with what you’d expect from a regular cycling program. In regards to intensity, it’s kind of a cross between circuit weight training and running.”

Researchers also point to the positive implications of being able to increase core strength by 70 percent, especially for the aging population. “I think that’s huge because the stronger people are through the core, the less low-back pain they are going to have,” Porcari says. Similarly, the gains in dynamic balance have major positive implications. “Older people who are doing some sort of kettlebell-like training are going to be more likely to avoid dangerous falls,” he says. “And on the other end of the spectrum, for athletes, the better your dynamic balance, the better your ability to balance when you’re moving and cutting and doing other athletic movements.”

The bottom line is, kettlebells may be decidedly old school, but thanks to the explosive, total-body nature of kettlebell training, its potential for serious body benefits is just as strong as ever. 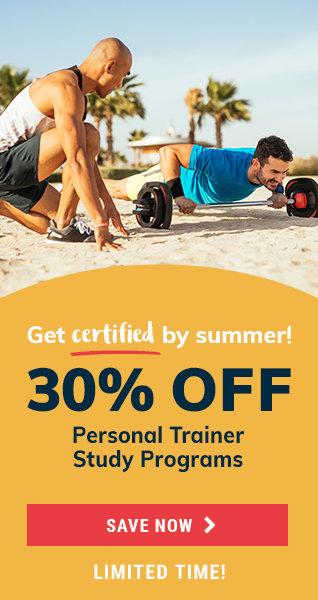