Q & A: Was Everything I Learned About Muscle Force Generation Actually Wrong? 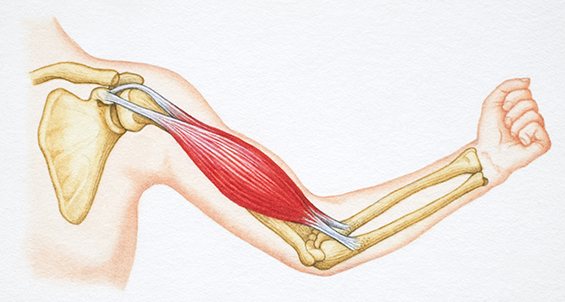 Q: I just heard about a new study suggesting that what was previously thought about muscle force generation—specifically, the sliding filament theory—is actually wrong? Is this true? And if so, how does this affect the types of programs I design for my clients?

Before forging ahead, it might be helpful to review the following chart for a quick refresher on common skeletal muscle contraction terminology. Keep in mind that this is a fairly technical subject, but one with some practical implications for fitness professionals (which are discussed at the end).

Muscle contraction involves a continuous four-step cycle called the sliding filament theory. Initially, an action potential is generated, which travels down the sarcolemma into the t-tubules. This action potential causes Ca2+ ions to be released from the sarcoplasmic reticulum. These free Ca2+ ions bind to troponin, causing it to remove tropomyosin, which blocks the active actin sites. ATP then binds to the myosin head. When the ATP separates into ADP and Pi, it causes a change in the myosin head form allowing it to attach to actin. When Pi is released, actin pulls on the myosin causing a contraction, also known as the power stroke. This cycle is repeated simultaneously across all muscle fibers for a muscle contraction. Ca2+ is actively removed after the action potential ends, causing tropomyosin to re-block the actin causing the contraction to end (Patton and Thibodeu, 2009). The binding of actin to myosin is essential in muscle force generation and consequently they must overlap to attach to one another.

This sliding filament theory is supported by the length-tension relationship, which was proposed in the 1960s (Gordon, Huxley and Julian, 1966). The length-tension relationship explains the force that can be produced at different fiber lengths. The length of the fiber depends on the position of both actin and myosin filaments within the sarcomeres that make up a muscle fiber. When a muscle fiber is stretched, and there is minimal overlap of actin and myosin, the contraction force is small. Similar force production is also seen at the other end of the spectrum, when there is maximal overlap of actin and myosin. However, when there is optimal overlap between actin and myosin, the amount of force that can be produced is maximal (Patton and Thibodeu, 2009). This relationship is currently the primary way of examining how muscle force changes due to the change in actin and myosin overlap, and has been the current way of thinking for the past 50 years.

As seen above, the length-tension curve has focused simply on the overlap between actin and myosin (i.e., only looking in one direction). However, it is well known that a contracting muscle is isovolumetric, which means that the muscle must grow in width when it contracts. Consequently as the muscle expands the distance between myosin and actin increases. This distance is called lattice spacing. The length-tension curve has traditionally only been based on the overlap between actin and myosin. New technology, computational power and the ability to validate the computer results through X-ray diffraction has allowed researchers to examine the change in force production depending on the lattice spacing. This change in lattice spacing at different muscle lengths seems to have an effect on the change in muscle force.

When the lattice spacing is held constant, the actin/myosin filament overlap reduces the steepness of the length-tension curve—changing how much force can be generated by about half, as seen in Figure 1. The change in lattice spacing is responsible for the rest of the force production, as was seen when the actin/myosin filament overlap was held constant. This increase in distance, due to the isovolumetric nature of muscle, causes the myosin head to attach at sharper angles over a greater distance. This indicates that muscle force production is multiaxial (along the axis of the muscle and the radial direction) and not just along one axis, as was previously believed. 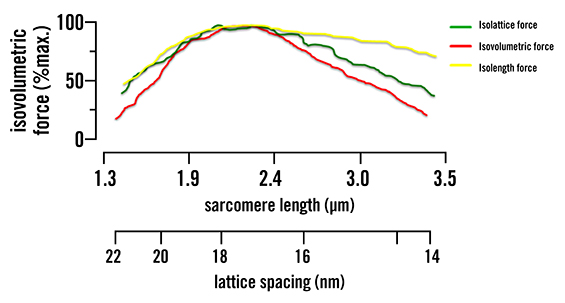 What Does All This Mean for Fitness Professionals?

While these latest research findings are intriguing, it is important that fitness professionals view them in the same vein as scientists—that these results are preliminary and not without limitations. Most notably, in the current study researchers examined isolated insect muscle fibers rather than intact whole human skeletal muscle. It therefore remains unclear whether the same phenomenon observed in the present study exists in human muscle fiber types and/or different skeletal muscle fiber types (e.g., Type I and Type II).

Nevertheless, these initial findings will certainly generate additional scientific inquiry and likely lead to a variety of practical applications for fitness professionals in their work with clients. These include:

Stay tuned on this topic, as we will learn much more in the coming years!