GOAL! Study Proves You’re Never Too Old to Bend it Like Beckham 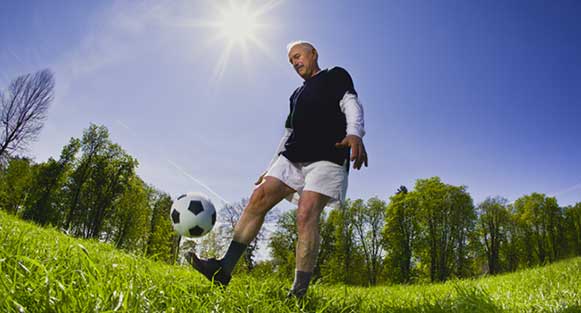 In much of the world, all eyes and ears will be tuned in to the 2014 World Cup in Brazil. Young and old alike will revel in the thrill and competition of this international men’s soccer tournament. And chances are, whether in the street or out on a soccer field, more than a few people will feel inspired to kick the ball around and maybe even organize a game or two.

And, based on a new study out of Copenhagen, Denmark, it really doesn’t matter how old you are—playing soccer can do wonders for your health. In fact, it can boost cardiovascular fitness and heart health, and minimize the risk of falls and fractures in elderly men, even if they haven’t played in decades—or never played at all.

Researchers at the Copenhagen Centre for Team Sport and Health recruited 27 untrained men aged 63 to 75 to participate in their study. Each participant was tested and randomized into a soccer group, a strength-training group and an inactive control group. The two training groups exercised for one hour, twice a week for a year. A comprehensive testing battery was used three times: at baseline, after four months and after 12 months.

The research team, which was comprised of 20 researchers from the Copenhagen Centre for Team Sport and Health, the University of Southern Denmark, Gentofte University Hospital and the National Research Centre for the Working Environment, was led by Professor Peter Krustrup, who has studied fitness and health effects for more than 10 years and published 55 articles in the area over the past five years.

Their results, which were published in the Scandinavian Journal of Medicine & Science in Sports, revealed that inactive elderly men improved their maximum oxygen uptake by 15 percent and their performance during interval exercise by as much as 50 percent by playing soccer for one hour two times per week over four months. Moreover, muscle function was improved by 30 percent and bone mineralization in the femoral neck increased by 2 percent.

“Our previous studies have shown that 70-year-old men with lifelong participation in soccer possess a postural balance and rapid muscle force that is comparable to that of 30-year-old untrained men,” explains Krustrup. “This time we have gone one step further by evaluating the intensity of soccer training as well as the health and fitness effects of soccer for untrained elderly men with little experience [playing the sport].”

Even for older participants, soccer proved to an effective form of high-intensity interval training. “The players had heart rates that were sky high and corresponded to the values obtained during elite soccer games,” says Associate Professor Eva Wulff Helge of the Department of Nutrition, Exercise and Sports, University of Copenhagen.

“GPS measurements and video analyses also showed that there are many fast runs, stops, turns, dribbles, passes and shots, providing strong stimuli for muscle and bone adaptations. The fast runs, intense actions and unorthodox movements may well be the cause of a large increase in bone mineralization in the femur bone and femoral neck after only four months and of the further 3 percent improvement from 4 to 12 months of training,” says Helge.

“Our study shows that intense training such as soccer can change the lives of elderly men,” says Krustrup. “The remarkable improvements in aerobic fitness and muscle strength make it easier for the players to live an active life and overcome the physical challenges of everyday life such as climbing stairs, shopping, cycling and gardening. This benefits not only the players themselves, but also their families and friends.”

In addition to being an effective form of high-intensity interval training and a great way to improve balance and prevent falls, soccer is also a fun and social activity, which should make it even more appealing to people of all ages, regardless of current fitness level. “The results provide strong evidence that soccer is an intense, versatile and effective form of training,” continues Krustrup, “including for untrained elderly men. It is definitely never too late to start playing.”