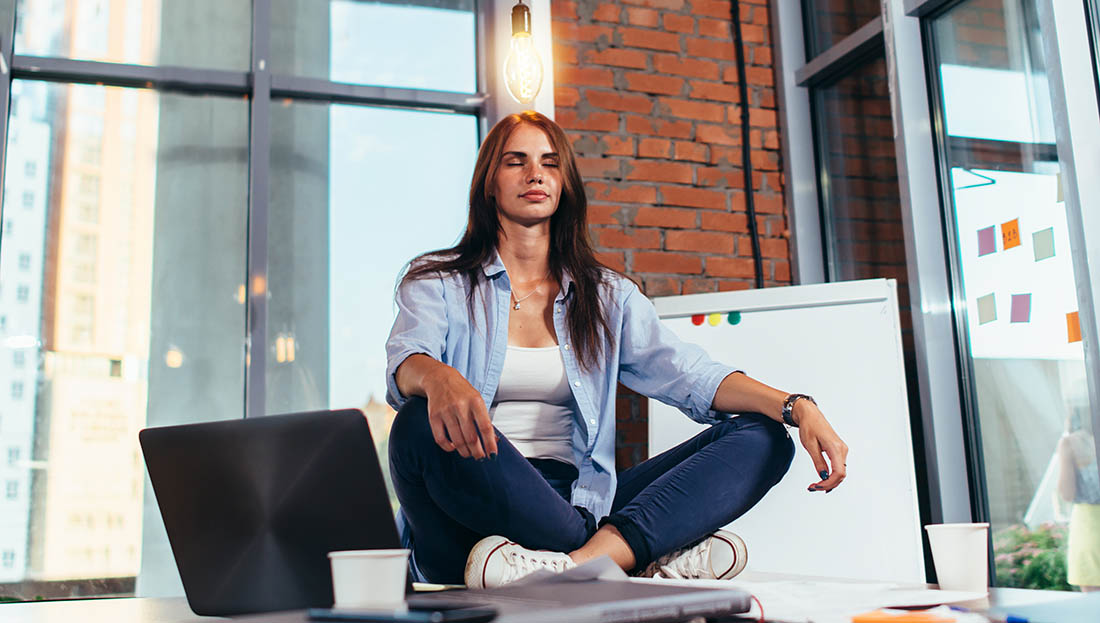 At the time my sons started taking ski lessons, I was a non-skier—and had no desire to learn how to ski (there was no way I was sliding down the mountain on two sticks!). When it came time for my youngest to start lessons, however, he wouldn’t take them without me, so I spent another winter in the lodge with him while his brothers skied. I also spent that time looking up the mountain, envisioning myself skiing gracefully down it.

It was a game changer!

The next winter, I was mentally prepared, because I had practiced visualizing myself skiing down the mountain. This might sound hokey to some, but research supports the notion of using visualization to reach your goals.

According to scientists, our brains can’t always tell the difference between reality and something we make up in our heads. For example, in one review of the literature, study authors concluded that “mental images seem to behave much like weak versions of externally triggered perceptual representations.” Researchers found that functional brain imaging work supported the behavioral evidence of participants “by demonstrating that common sets of neural structures are employed during both events.”

In other words, imagining something and actually doing that thing stimulates the same parts of the brain.

Another study concluded that repeatedly imagining a future event—like me skiing down the mountain—increases the likelihood of it happening (and it did!). Similarly, other research shows that imagined rehearsal of an action increases the chances of that person completing that action.

None of this is a surprise to most athletes. Watch downhill skiers at the top of the mountain before their run. While they may look like they’re rocking out to some tunes with their eyes closed and earbuds in, they may actually be visualizing the course—the composition of the course, how they’ll take every turn, moving their body with the turns, what it all feels like. By the time they’re speeding down the hill, they’ve already rehearsed it repeatedly in their heads, making it a familiar scene to their brain and increasing their chances of success.

Michael Phelps, arguably the greatest swimmer of all time and holder of the most medals in Olympic history, has been following a pre-competition visualization and relaxation routine since he started working with his long-time trainer, Bob Bowman, at age 11. Not only does Phelps visualize the race, he imagines what might go wrong and how to prepare for it.

Visualization may go even further. Imagine gaining muscle mass by doing “mental contractions,” but no actual physical contractions. In separate studies, published in the journals Frontiers in Psychology and the Journal of Neurophysiology, researchers reported similar findings: Imagining a muscle flexing stimulates the cortical part of the brain, which is related to movement, which, in turn, achieved actual physical strength gains.

“This [research] provides hard evidence for something sports psychologists have long understood,” writes Tara Swart, MD, PhD, in her book, The Source. Swart, a neuroscientist and senior lecturer at MIT, says that the brain-body connection is enhanced when we create a mental image of the things we want to achieve while also matching visualizations with simulated physical sensations. “Bringing together a physical and a mental trigger will activate the body as well as the brain, forming double the reinforcement for the desired outcome,” explains Swart.

How Can You Use Visualization in Your Health Coach Practice?

If you already meditate or use it with your clients, there’s a good chance you may also be practicing visualization on some level, as there are definitely areas of overlap between the two.

For example, one exercise I use with my clients is to have them sit or lie comfortably, eyes closed, while performing deep breathing. I tell them to envision breathing in safety, calmness, healing, peace and confidence into their bodies, and exhaling pain, fear, anxiety, self-doubt (or whatever they’re struggling with) out of their bodies. With each inhalation, they envision the healing, peace, calmness, safety and confidence taking up more and more space within their bodies, leaving less room for the other stuff, until they are completely filled with “the good stuff.” I encourage them to relax into this feeling for a bit, while continuing the deep breathing, as this helps to stimulate the vagus nerve and parasympathetic nervous system.

Matt Hooper, a certified health coach, takes a similar approach to visualization. “I like to use the meditation approach [to visualization],” he says. “We start off with relaxing and sinking into our environment while using slow, focused breathing. I utilize deep breathing for visualization and mental rehearsal.”

Hooper “places” his clients into various situations that they’re struggling with in real life, such as making healthy choices or sticking with their scheduled exercise sessions, leading them through visualizations of them succeeding. “My clients often express that they felt like they were literally in the experience, but it’s different, because they know they can’t fail. This is exactly why we do visualizations.”

“Visualization is part of my practice as a wellness coach with every program and client,” says Marcela Cameron, a certified health coach. “I also offer workshops on visualization and creating vision boards.”

A vision board is a collage of pictures and photos that represent things you want in your life. Research suggests that vision boards can be used to inspire clients to focus on their goals and empower them to meet them; they’re also helpful for those who have yet to form a clear picture of what they actually want to achieve.

Vision boards can be centered on a specific goal or area of life, such as health and fitness, or something like starting your own business or having a goal of visiting family you’ve never met in Italy. Vision boards can also be more whole-life encompassing, painting a picture of what you want for your life in general. It’s a way to move your visions from your head onto posterboard, giving you a tangible pictorial version of your vision, goals and desires.

When I teach vision-board workshops, I start off with a group visualization. The goal is to remove any boundaries and quiet the “little voice” that says things like, “That’s stupid,” “You can’t do that” or “That will never happen.” I give participants permission to dream again. Then they get busy going through catalogs and magazines, cutting out images and words that inspire their vision and goals.

Swart explains that the science behind how vision boards work is that seeing images bypasses conscious thought, tracking instantly to your brain’s visual centers. Hence, the brain’s filtering system can’t edit them out or dismiss them (your brain will toss out information if it doesn’t consider it important, making it harder for you to remember or believe). Because the board is comprised of images and not just words in your to-do list, it is believed to have more impact on your brain and behavior.

Swart prefers the term “action board” to vision board, as she says that it’s not something you just create and then sit back and wait for it to all come true, like a daydream. This is an important distinction, as simply creating a vision board and waiting for that vision to become a reality is not only ineffective, but it may also reduce your chances of achieving them. For example, one study found that fantasizing about a perfect future decreased the chances that a person would actually do the work necessary to make their fantasy a reality.

In fact, other research suggests that one of the most effective things you can do is to visualize doing the work to achieve the goals on your vision board. Researchers at the University of California, Los Angeles, examined the difference between focusing on achieving a goal vs. the process required to achieve it. About a week before a midterm exam, students spent a few minutes per day either mentally rehearsing the process for doing well, such as when and where they would study, or imagining how it would feel to get a good grade. The students in the former group were better prepared, felt less stressed and scored higher grades, while those in the latter group felt better about themselves, studied less and (not surprisingly) achieved lower grades on the exam.

The lesson, of course, is that no amount of visualization can offset the need for actual effort. Vision boards serve as a reminder of what you want most (not necessarily what you want right now) and help to keep you focused and on track. After your vision board is complete, place it where you will see it every day. This allows it to be a constant reminder of your goals and increases the chances of you doing the action steps necessary to bring your board to fruition.

Having your clients create vision/action boards can also help you, as their coach, get a better idea of what they want for their lives, health and goals. You can then use their vision/action boards as a springboard for deeper visualizations, helping them envision overcoming potential obstacles and performing the necessary steps to reach their vision with great success. Tailor the visualizations with each client, according to their goals and vision.

Visualization is a great tool to add to your health coach toolbox. It helps more firmly cement goals and desires and provides a gateway for the brain to feel safe with these new ideas and visions. The only thing it costs is your time and willingness to try it.

In this video, Carrie Myers explains how visualization can help your clients more firmly cement goals and desires and offers a gateway for the brain to feel safe with these new ideas and visions.