Ageism and the Changing Face of Active Agers 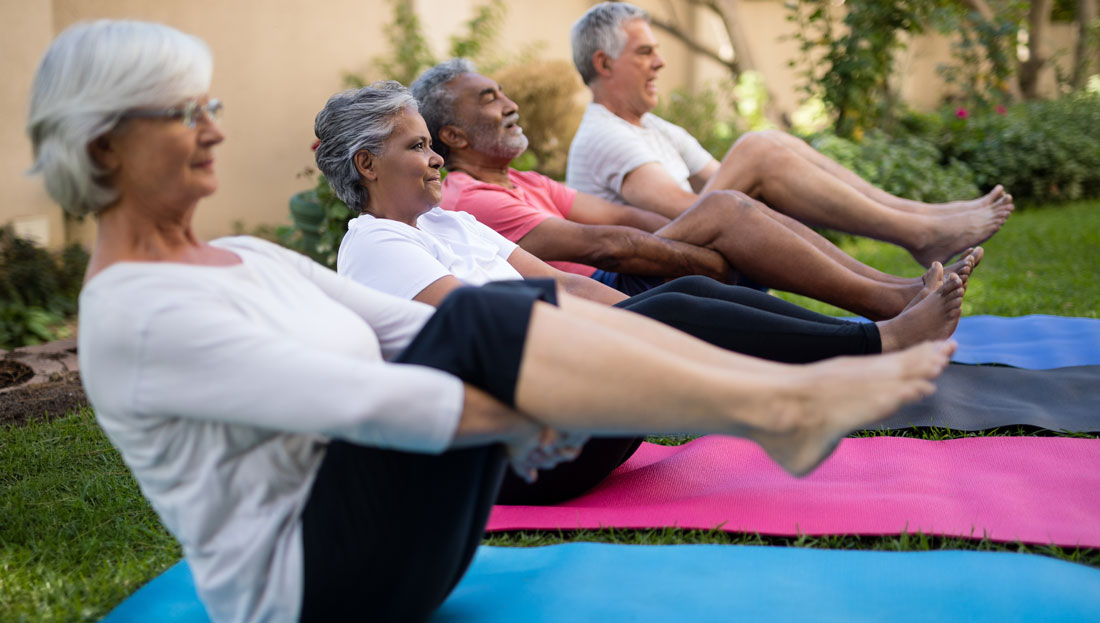 Many of my clients are at an age that many would classify as “senior.” In fact, based on my current chronological age—51—it’s quite possible that some might put me in this category as well! I can tell you, however, that while I may qualify as a senior in many instances, I am in no way ready to embrace that label. And chances are, neither are many of your clients.

Here are some questions worth asking yourself: Are you evaluating your clients’ abilities according to their ages? Do you tend to stereotype people based on your perception of how old they may be? Do you see physical signs of aging, such as gray hair or wrinkles, as indicators of physical limitations or health challenges?

Regardless of your own age, it is important to avoid broadly categorizing people—along with their likes and dislikes, abilities and challenges—based on age. This is particularly poignant at a time when people are living longer and many are determined to defy the expectations that come with each passing decade. This article takes a critical look at ageism—particularly as it relates to issues of health and fitness—and discusses how you can ensure you are viewing your clients—and helping them to view themselves—according to their unique abilities and challenges rather than their chronological age.

Ageism, according to a study published in the European Journal of Ageing, “is defined as stereotypes, prejudice or discrimination against (but also in favor of) people because of their chronological age. Although the practice of ageism and ageist policies can be directed toward people of any age, most research in this area, to date, has addressed the ageism phenomenon in relation to older adults.”

In a systemic review of studies related to ageism published in Aging Research Reviews, researchers concluded that ageism has a negative impact on older adults’ health and well-being, and “is increasingly recognized as a public health issue and as one of the most prevalent forms of stereotyping, prejudice and discrimination.”

Interestingly, ageism is not only outwardly directed—it can also affect one’s self-perception. A Yale University study, which surveyed 660 adults age 50 and older, highlighted how ageism can affect personal health, well-being and even longevity. The researchers determined that older adults with more negative self-perceptions of aging lived an average of 7.5 fewer years than those with more positive self-perceptions of aging. This disadvantage remained even after researchers accounted for factors such as age, gender, socioeconomic status, loneliness and functional health.

Another study conducted at Yale University showed that, compared to participants with more negative self-perceptions of aging, those with more positive self-perceptions reported better functional health, which encompasses activities such as vigorous work around the house and includes shoveling snow, housework, walking up and down stairs, walking half a mile, and going out to run errands, to a movie, etc. These findings were echoed by a systematic review of observational studies. Another recent study found that higher levels of positive attitude toward one’s own aging appear to be a protective factor for health in older adults, including those with cancer.

Why is all this important to health and exercise professionals? According to the U.S. Census Bureau, “The growth of the U.S. population age 65 and older exceeds that of the total population and the population under age 65.” This means that there is a tremendous opportunity for you to serve this population, otherwise known as “active agers.” How you serve them, your attitudes and the language you use will, in part, determine how they view themselves and the aging process. And, as the research just discussed suggests, this can, in turn, affect their health and well-being.

The Health and Fitness Industry and Ageism

It can be challenging to recognize one’s own perceptions and biases, but simply acknowledging that we all have them to some degree or another is an important first step. “We all have biases and assumptions we make based on our own experience,” says Justin Price, creator of the ACE-approved Corrective Exercise Specialist program. “This is why it is sometimes difficult for young and fit professionals to identify with active agers.”

Jeff Schlicht, PhD, a professor in the Department of Health Promotion and Exercise Sciences at Western Connecticut State University, feels that ageism in the fitness industry is common. As an example, he cites a textbook for group exercise instructors that he recently was asked to review. “Almost all the images of exercising older adults showed them using a chair for support. Another image was of a group of [older] women about to engage in water aerobics. These images are telling our young fitness professionals that older adults need to be protected—by using a chair or putting them in water—while exercising. This is incorrect. All bodies follow the overload principle, changing and improving when systems are challenged beyond their normal capacities. More often than not, chairs and water will reduce exercise intensity. Some individuals may require those supports, but they are the exception, not the rule.”

Richards warns against categorizing people based on their age. “If doing so, then when does someone become [an active ager]? Sixty-five? Seventy-five? Eighty-five? Sixty-five-year-olds are an entire generation younger than 85-year-olds. Why would their fitness needs be the same? Having worked in a setting where I was surrounded by more than 1,400 older adults with an average age of 85, I saw an enormous range of fitness levels—from those with significant physical ailments and mobility challenges [to those who] were out running marathons.”

Richards goes on to cite a 2018 Ball State University study that showed that the cardiac and skeletal muscle of life-long exercisers in their 70s are similar to those of someone decades younger than them. “You just can't categorize people that neatly,” she argues.

While it may be impossible to completely snuff out ageism, there are some things we can all do to mitigate it.

For starters, says Schlicht, “I would encourage everyone to eliminate the word ‘senior’ from their vocabulary. The word itself is ageist in that it implies that a diverse cohort of people (usually anyone over 60) can no longer be considered adults—they are now something different. This is the wrong way to think about older adults, as evidenced by the most current Physical Activity Guidelines for Americans, which states that older adults should follow the same FITT guidelines for exercise that apply to other adults. Older adults are not a distinct class of people. They are simply adults who are getting older.”

Muscle Growth at Any Age

According to Schlicht, while one of the challenges older adults may face is sarcopenia, a loss of skeletal muscle, quality and strength associated with aging, “it is well-established that strength training at sufficient intensities improves muscle quality and quantity. High-intensity strength training [>70% one-repetition maximum (1-RM)] is a particularly robust way of improving muscle ability in all people, including older adults.”

Schlicht adds that health and exercise professionals might also consider speed in addition to load. “Type II muscle fibers are especially at risk during age-related sarcopenia, so power training, which has been shown to be safe when special attention is paid to form and preventing joint hyperextension, is something all health and exercise professionals should think about adding to their arsenal of older adult training techniques.”

“If there’s one thing I’ve learned, it’s that people are just people at every age,” confirms Richards. “Just relate to them as you would anyone else. Don’t treat them as ‘old’—and definitely don’t call them patronizing nicknames like Honey, Sweetie or Grandma!”

Avoid making assumptions about the type of exercise your active agers might want to participate in, urges Alexis Mittelstadt, MSPT, a physical therapist in Shelburne, Vt. “[You might] presume an 88-year-old woman won’t like a class with boxing gloves, or that a 68-year-old man won’t do a dance fitness class, but you will find some eager to try nevertheless. Know that these clients can be just as serious about fitness and competition as younger clients.”

While you don’t want to make assumptions about your active-aging clients, or lump them all into a single category, there are some things worth considering that can help make the exercise experience more enjoyable and sustainable for them. For example, Schlicht encourages group exercise as an option for active agers. “As their social networks naturally decline, group exercise programs become a vital social resource.”

And, just as every age and stage of life has its own unique challenges and barriers, acknowledging some of the physical changes related to aging can be incredibly helpful for these clients. “Account for things like impaired hearing, cognition and vision in your training regimen and techniques,” recommends Mittelstadt. “Addressing sensory and cognitive impairments proactively keeps them from becoming barriers.”

“Think of exercise as a medical intervention,” advises Schlicht. “Because comorbidities do increase with age, it is important to have an understanding of your clients’ medical histories.”

Richards agrees. “You’ll definitely want to be up to date on strategies to address the health concerns that are common among older adults—including balance and fall risk, brain fitness and dementia, hearing loss, joint replacements, medication interactions, and so much more—and seek out specialty programs and training that specialize in issues affecting older adults.”

“If this article achieves one thing,” concludes Schlicht, “I hope it raises awareness that older-adult exercise programs should not be underpowered, low-intensity, non-weight-bearing interventions.” Rather, exercise programs for older adults should be appropriately challenging, multicomponent offerings tailored to unique individual needs and focused on cardiorespiratory fitness, muscular training, flexibility and balance, the same components included in exercise programs for people of any age. Creating exercise experiences based on clients’ abilities, goals and interests and not on their age is a step in the right direction toward countering clients’ negative self-perceptions about aging and overcoming ageism.