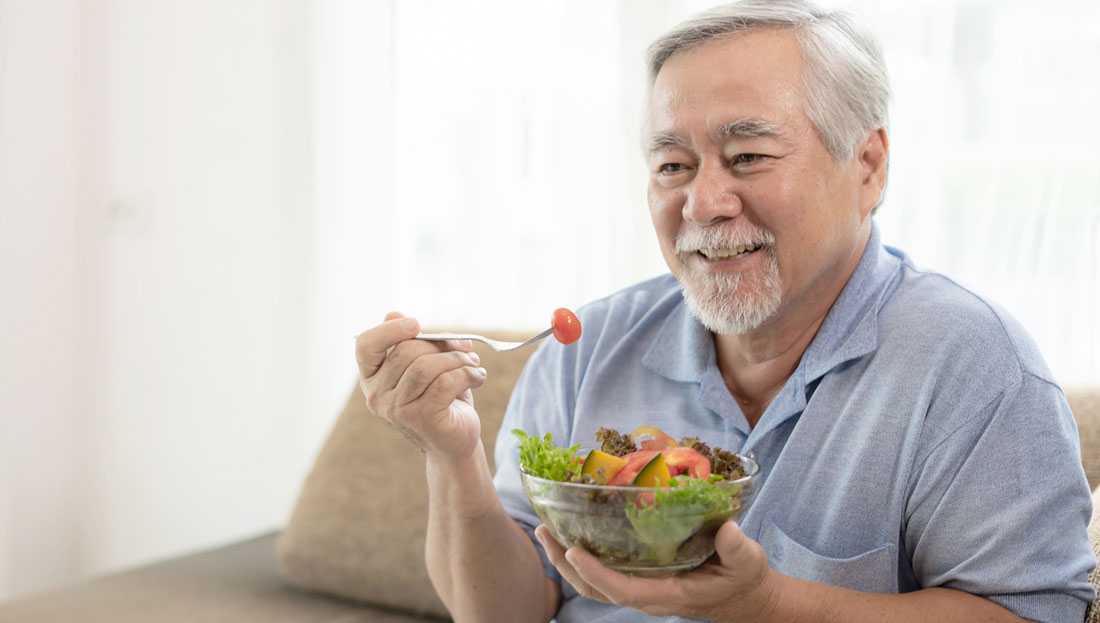 Advances in medicine and healthcare over the past century have led to increased life expectancies. However, aging is often still accompanied by frailty and a decline in one’s thought processes. This level of decline varies enormously among individuals and an improved understanding of what influences these aging mechanisms could lead to improved strategies for increasing people’s health span, which is the period of one’s life that is free from debilitating disease.

In a new study published in Communications Biology, researchers from King’s College London examined the molecular interactions that occur in response to varying levels of nutrients, otherwise known as nutrient-sensing pathways, as we grow older. Using a combination of laboratory-based techniques and analysis of data on people’s visual memory and learning, healthy eating, adherence to the Mediterranean diet, calorie intake and physical activity, researchers identified a number of genes that are active in nutrient-sensing pathways. Using this data, which was drawn from more than 2,000 individuals, the researchers found that specific genes were associated with performance on memory tasks. The study identified that the genes ABTB1 and GRB10 were both influential in nutrient-sensing pathways and showed association to memory.

This study aimed to explore whether nutrient-sensing pathways can provide the molecular basis for the association between lifestyle and aging. These pathways have been implicated in stem cell maintenance, suggesting they could also be involved in the interaction between lifestyle, neural stem cells (NSCs) and cognition.

Previous studies have indicated that NSCs in the hippocampal part of the brain play an important role in the decline of people’s thought processes and memory over time. NSCs are cells that keep dividing as long as they are alive and make either more NSCs or cells that have a specialist function in the brain. The maintenance of these NSCs is important in memory and is affected by environmental factors such as diet and exercise, potentially explaining some of the variation in how aging affects different people.

Although the role of nutrient-sensing pathways in aging and the maintenance of stem cells in the brain has been investigated in animal models, no human studies have so far investigated their role in NSCs in the hippocampus.

Using a novel back-translation approach that uses laboratory-based experiments on NSCs to inform analysis of epidemiological data, rather than vice versa, the researchers showed that variations in ABTB1 are associated with performance on a standard memory task and that variation in the gene GRB10 is an important player in determining the association between following the Mediterranean diet and memory performance. The study also identified an interaction between exercise levels and the SIRT1 genotype, which also appears to play a role in memory performance.

“Our study shows that nutrient-sensing pathways play an important role in memory and suggests that the ABTB1 and GRB10 genes are likely molecular links for the association between diet, the ageing of neural stem cells and our memory ability,” explains lead author Chiara de Lucia, of the Institute of Psychiatry, Psychology and Neuroscience at King’s College London. “Identifying these genes as the missing links between these three important variables could inform new approaches to help improve the aging process through targeted changes in diet and exercise and ultimately in developing new drugs in the future.”

Finding the means to prevent or slow down the processes that drive the decline of our thought processes during aging is one of the great endeavors of the 21st century, argues senior author, Dr. Sandrine Thuret, also of the Institute of Psychiatry, Psychology and Neuroscience. “To our knowledge, this is one of the first studies looking at these relationships with human data and adopting this back-translation approach which uses lab-based experiments to inform research on large datasets, allowing for a more targeted approach.”

Thuret continues: “Our findings suggest that changes in lifestyle may be able to delay a decline in memory and thinking, but that the effectiveness of these approaches will depend on the genetic makeup of each person. For example, adherence to a diet such as the Mediterranean diet may be most beneficial for people with a specific GRB10 mutation, while increased exercise may be a better approach for participants with specific SIRT1 variations.”

Thuret believes future research should look to replicate these findings on a larger dataset, which would allow for the testing of three-way interactions among diet, exercise and memory to gain a more comprehensive understanding of how these relate to one another.

Given the increasing prevalence of Alzheimer’s disease and dementia [World Health Organization (WHO), 2017], it is not surprising that many people are concerned about losing their memories as they get older. And they want to know what they can do to avoid it. While it is generally accepted that a healthy lifestyle is the best way to retain good health, both physically and mentally, across the lifespan, as this study demonstrates, researchers are just beginning to identify the genes and molecular interactions that influence the aging process.

While great advances are being made in identifying these specific genes, we are still a way off from being able to use DNA profiling to tailor specific lifestyle practices to ward off aspects of aging, including memory loss. However, there is no question that the lifestyle habits highlighted by researchers—physical activity and a healthy diet, in particular—remain the best ways to not only delay aging and improve memory retention, but also to increase the length of one’s “health span.”  Work together with your clients to create and implement meaningful and achievable goals for making healthy choices now that will greatly impact the amount of health they are able to enjoy in the future.

Worldwide, an estimated 50 million people are living with dementia (WHO, 2017). These numbers are projected to reach 82 million by the year 2030 and 152 million by 2050, with the majority of individuals coming from low- and middle-income countries (WHO, 2017; Alzheimer’s Disease International, 2015). Within the United States, approximately 5.7 million people are living with dementia (Alzheimer’s Association, 2018), with Alzheimer’s disease accounting for approximately 60 to 70% of the total.