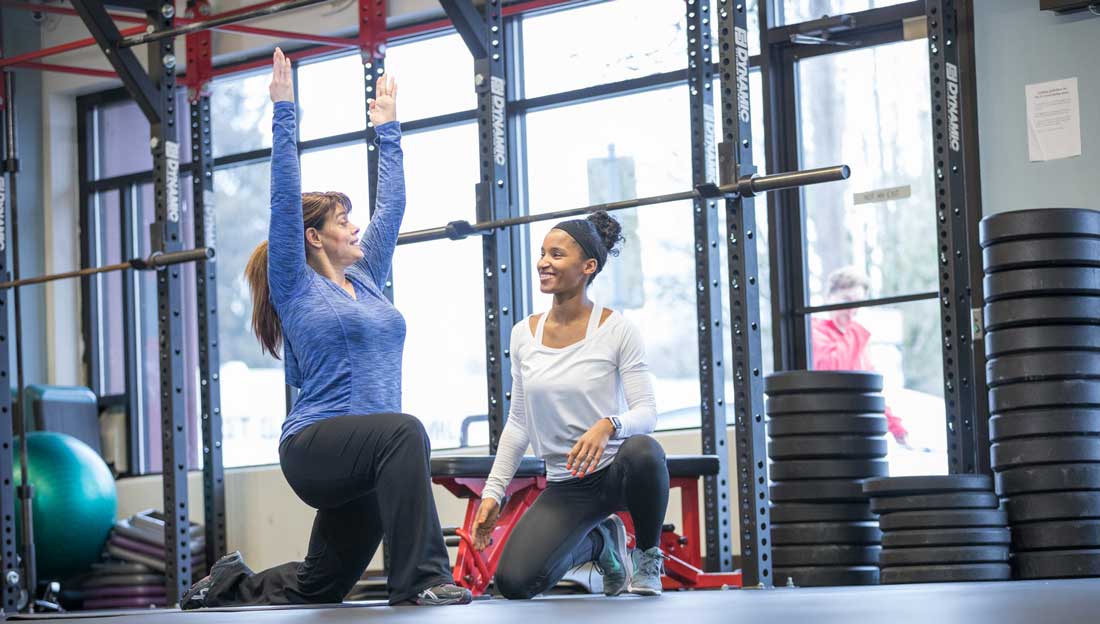 Kate* is an active, healthy 56-year-old woman. One day while lifting cement blocks to build a fireplace, she felt like something had fallen out of place. “I also started leaking urine when sneezing, coughing or laughing hard. If I had to pee really bad, I would sometimes dribble just a little bit.”

Kate’s doctor diagnosed her with bladder prolapse, also known as a cystocele, a condition in which the bladder drops out of place due to weak pelvic floor muscles. Prolapse typically happens over time and can develop for many reasons, including pregnancy, childbirth, menopause, heavy lifting, straining during bowel movements, constipation, coughing and obesity.

“Urinary incontinence is a silent epidemic, with the most common type, stress urinary incontinence (SUI), affecting approximately one in three women at some point in their lives,” says Ruth M. Maher, P.T., Ph.D., D.P.T., director of the Women's Health Residency Program at Creighton University in Omaha, Neb. “Women [tend to] remain silent, thinking this condition is a normal part of aging, and are being encouraged to use pads to manage their symptoms.”

Maher stresses that this is not acceptable. “Education is the key to addressing the topic with clients and students. It’s important to note that this type of urinary incontinence affects women of all ages and is not a normal part of aging.”

Michelle Decker, M.S.P.T., a physical therapist at Littleton Regional Healthcare in Littleton, N.H., agrees. “Incontinence is not a natural part of the aging process, but is typically caused by life habits that are easily changed.”

At this point, you may be wondering how this applies to your work as a health and exercise professional. As it turns out, you are in a position to change the lives of many of the women who come to you for guidance.

“Fitness professionals need to know that many women will modify their daily activities, including fitness regimens, to minimize symptoms. This is not the answer,” explains Maher. “Pelvic floor exercises should be incorporated into all aspects of health and wellness.”

I Have to Talk About What?

Obviously, this is not a topic that is easy for most to bring up in conversation with clients. Keep in mind, however, that the pelvic floor is the oft-forgotten part of the core, and the core is something that is probably a normal part of your conversations.

“As you talk about the core, explain that the pelvic floor is the floor of the core box,” explains Decker. “The breathing diaphragm is the top, the abdominals and back extensors are the front and back of the box. If any of these areas are weak, you will have dysfunction. You need a strong, but flexible, pelvic floor to have a good core.”

Have We Been Doing It All Wrong?

Some studies suggest that performing the Valsalva maneuver while lifting heavy weight may offer some support and protection to the spine. But how does it affect the pelvic floor?

Holding your breath during exercise “causes increased intraabdominal pressure and more downward forces on the pelvic floor,” explains Decker. “It is very important to exhale with exertion.”

Some exercises, by their very nature, can cause increased pressure on the pelvic floor. In a 2015 study, for example, researchers found that the pelvic floor is strained during crunches. “The most salient finding of this study,” says Maher, “was that even asymptomatic women could potentially be putting themselves at risk for developing urinary incontinence and pelvic organ prolapse with curls-ups.”

Of course, crunches have been a source of debate for some time, and not just for their impact on the pelvic floor. For example, according to Pelvic Floor First, an initiative of the Continence Foundation of Australia, crunches and sit-ups are not a good option for strengthening the core to begin with. “In fact, doing lots of sit-ups can cause excessive upper-abdominal tension and create a ‘pot belly’ appearance. Pelvic floor exercises, when done correctly with relaxed upper abdominals and normal lower abdominal co-contraction, will also help to achieve flatter abs.” (see sidebar)

Other exercises that can place undue strain on the pelvic floor muscles include supine double-leg lowering, the Pilates Hundred, and the V-sit. Even doing push-ups and plank fully extended (as opposed to on your knees) increases this pressure. Because of this, it’s important to play it safe with exercise progression, making sure that your clients’ core muscles are strengthened at a base level before progressing to more advanced exercises.

How to Properly Teach Pelvic Floor Muscle Exercises (a.k.a. Kegels)

“Exercises should commence in an unweighted position, initially in supine,” says Maher, “and then progress to more challenging positions and eventually standing. These contractions can then be incorporated with other exercises that focus on improved core strength and function, which enhance the client's ability to dissipate loads through the lumbo-pelvic region.”

To initially help clients and students find their pelvic floor muscles, have them contract the muscles they would squeeze to stop the flow of urine or prevent passing gas. Try to isolate the pelvic floor muscles without contracting the abdominal and gluteal muscles. Maher suggests cueing something like, “Gently lift up the muscles at the back and the front inside you as high as you can…try to hold this contraction for eight to 10 seconds…now let go and completely relax those muscles…”

Maher recommends thinking of pelvic floor muscle exercise as a cycle of contract-relax exercises. “The post-contraction relaxation phase is extremely important,” she says.

To target the fast-twitch fibers, do the same cycle of contract-relax, but with two quick upward contractions (called “flicks”) followed by the relaxation—up, up, down—each part lasting just one to two seconds each.

It’s important to give precise instructions to clients and participants and for them to be able to isolate the pelvic floor muscles. Incorrectly performing Kegels can exacerbate symptoms, says Maher. “Over the years, I’ve had many women tell me they’ve been doing pelvic floor exercises for years and they don’t work. When I assess them further, it appears that what they thought was a pelvic floor contraction was actually a Valsalva and/or gluteal contraction.”**

Decker agrees on the importance of the relaxation phase, and because of this, suggests performing elevator Kegels in a full squat or as deep a squat as possible, holding onto a chair for balance.

“Squatting is the best way to work the pelvic floor muscles, as the muscles can fully stretch and relax before contracting,” explains Decker. “If squatting is not possible, [have the client] lie down [with legs] in butterfly position with pillows supporting the legs so the muscles can relax. [In this position], the [pelvic floor] muscles are stretched and can then contract well. Bring the pelvic floor muscles up from the "basement" to the first, second and third floors, pausing at each ‘floor.’ Then lower down one floor at a time.”

Once you've instructed your participants on properly performing pelvic floor exercises and isolating the pelvic floor muscles, you can add exercises that combine engaging the transverse abdominis (TA) and pelvic floor muscles (PFM) together. A recent study showed that in doing so, the TA gained thickness, and hence, strength, and that this type of movement “may be recommended to improve stress urinary incontinence.”

Participants were given the following instructions, which you can share with your participants. Subjects were instructed to draw in the lower abdominal wall toward the spine, an action that specifically activates the TA. When the TA sustained isometric contraction, the subjects were instructed to contract the muscles around the vagina “like a drawstring” to lift them internally and to keep this position for 3 seconds.

Whether you feel adept at instructing clients and students in Kegels or not, you can also recommend simple lifestyle changes, including better hydration and positioning while eliminating to reduce the need to bear down. Studies even suggest that proper posture is important regarding pelvic floor activation. “In our slouched postures, the tailbone is moving closer to the public bone and the muscles become slack,” informs Decker. And slackness equates to weakness.

If you just aren't comfortable discussing this topic with your clients, you can recommend an app that will do the job for you, such as the Pelvic Floor First app, which can be found in the iPhone or Android app stores. And don’t forget that men have pelvic floors, too. Click here for a great resource on pelvic floor exercises for men.

As for Kate, she chose to work with Decker as opposed to having surgery or using a pessary, and no longer has any of her previous symptoms.

“I would say it took about four to six weeks to start seeing a reduction in symptoms,” Kate says. “I still do the exercises about five days a week on my own and also changed some of my habits for bladder health, such as drinking more water. I know my bladder is not completely back in place, but as Michelle told me, it didn't fall down all at once, and it will take time to get it back into place.”

*Name has been changed.

** If you are regularly doing these exercises with a client who is not seeing an improvement in symptoms (e.g., bladder leakage), refer her to her healthcare provider.