Run For Your Life 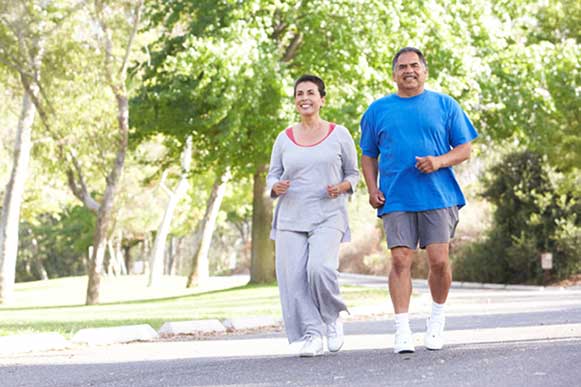 There’s a popular Internet meme that says, “No matter how slow[ly] you go, you’re still lapping everyone on the couch.” Well, based on new research, a new meme may be in order: “No matter how slowly you go, you’re still reducing your risk of death from cardiovascular disease.” It may not be nearly as catchy, but it is good news for those whose pace more closely resembles a shuffle than a sprint.

Exercise is well-established as way to prevent heart disease and it is a component of an overall healthy life, but it is unclear whether there are health benefits below the level of 75 minutes per week of vigorous-intensity activity, such as running, recommended by the U.S. government and World Health Organization.

Researchers from Iowa State University studied 55,137 adults between the ages of 18 and 100 over a 15-year period to determine whether there is a relationship between running and longevity. Data was drawn from the Aerobics Center Longitudinal Study, where participants were asked to complete a questionnaire about their running habits. During the study period, 3,413 participants died, including 1,217 whose deaths were related to cardiovascular disease. In this population, 24 percent of the participants reported running as part of their leisure-time exercise.

Compared with non-runners, the runners had a 30 percent lower risk of death from all causes and a 45 percent lower risk of death from heart disease or stroke. Runners on average lived three years longer compared to non-runners. Also, to reduce mortality risk at a population level from a public health perspective, the authors concluded that promoting running is as important as preventing smoking, obesity or hypertension. The benefits were the same no matter how long, far, frequently or fast participants reported running. Benefits were also the same regardless of sex, age, body mass index, health conditions, smoking status or alcohol use.

The study showed that participants who ran less than 51 minutes, fewer than 6 miles, slower than 6 miles per hour, or only one to two times per week had a lower risk of dying compared to those who did not run. DC (Duck-chul) Lee, Ph.D., lead author of the study and an assistant professor in the Iowa State University Kinesiology Department in Ames, Iowa, said they found that runners who ran less than an hour per week have the same mortality benefits compared to runners who ran more than three hours per week. Thus, it is possible that more may not be better when it comes to running and longevity.

What does this mean for your clients? Knowing they don’t have to run fast or for long periods may be the motivation they need to stay active between fitness classes or training sessions. “Because time is one of the strongest barriers to participation in physical activity, the study may motivate more people to start running and continue to run as an attainable health goal for mortality benefits,” Lee said. “Running may be a better exercise option than more moderate-intensity exercises for healthy but sedentary people since it produces similar, if not greater, mortality benefits in five to 10 minutes compared to the 15 to 20 minutes per day of moderate-intensity activity that many find too time consuming.”