Savings are in session. Up to $350 off study programs. Final days! Save now
Up to 40% off Behavior Change courses. Limited time! Go now
Up to 50% off all specialist programs. Limited Time! Save now 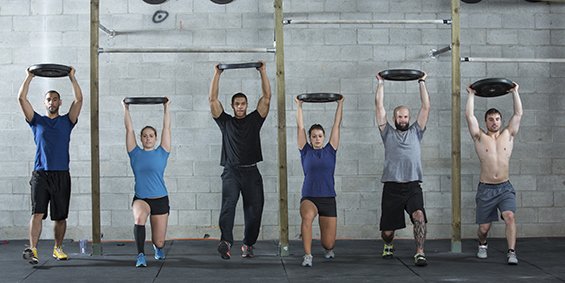 “It can kill you…I’ve always been completely honest about that,” said Greg Glassman in a now somewhat infamous New York Times interview about CrossFit, the high-intensity workout program he founded in 2000.

A former gymnast and gymnastics coach, Glassman designed the no-nonsense and notoriously tough workout regimen by combining functional strength training with gymnastics, circuit training and endurance exercise. It started with a single gym in Santa Cruz, Calif., and grew slowly from there in a cult-like manner, mostly the territory of underground fitness types and hardcore military guys. But it has since blossomed into a full-fledged global workout craze, attracting everyone from soccer moms and college coeds to middle-aged executives and cubicle dwellers.

Today, CrossFit boasts more than 7,000 CrossFit gyms (except they call them “boxes”) worldwide, more than 35,000 accredited trainers, more than 10 million Crossfitters (nearly 60 percent of whom are women) and even recently inked a 10-year multi-million dollar deal with Reebok to sponsor the annual CrossFit Games, which crowns the man and woman deemed the “Fittest on Earth.”

While all of this newfound popularity certainly lessens some of CrossFit’s original underground fitness street cred, it does not diminish the strenuousness of the workouts themselves. Anecdotally, the body sculpting and endurance/strength-building success stories of CrossFit are many. But surprisingly, very little real scientific research has been conducted on CrossFit.

Spurred on by CrossFit’s immense popularity, the American Council on Exercise enlisted researchers from the University of Wisconsin, LaCrosse, to gauge the energy expenditure and relative exercise intensity of a pair of CrossFit workouts.

Led by John Porcari, Ph.D., head of the University’s Clinical Exercise Physiology program, and Paige Babiash, M.S., the research team first recruited 16 healthy, moderately to very fit female and male volunteers between the ages of 20 and 47. Next, to establish a quantifiable baseline of fitness, each subject completed a maximal exercise test on a treadmill while researchers gathered data including heart rate (HR), VO2max and ratings of perceived exertion (RPE). This data also enabled the research team to create a regression equation for each subject to predict their individual VO2max based on HR data. This is key because it would be impossible for the subjects to complete the CrossFit workouts while wearing the bulky VO2max metabolic testing gear.

For this study, researchers selected two separate CrossFit workouts—each of which has been used as an official CrossFit Workout of the Day (WOD). For each WOD the goal is to complete all of the prescribed repetitions in the shortest amount of time possible. The first WOD used in the testing, named Donkey Kong, incorporated burpees, kettlebell swings and box jumps. Each exercise was performed three times, with the number of repetitions decreasing each time. During the first round, each exercise was performed 21 times, the second round 15 times and the final round nine times. Between each exercise, subjects climbed a flight of stairs.

The second WOD selected is one of the most popular WODs within the CrossFit community. It’s called Fran and consists of just two exercises: thrusters (a front squat into a push press with a barbell) and assisted pull-ups. This WOD was performed in the same sequence as the first. Each workout included a five-minute warm-up, a skill phase, a WOD and a five-minute cool-down phase. Prior to completing each of the CrossFit workouts, each subject was required to practice the selected exercises and then demonstrate to researchers that they were proficient at each one.

During actual testing, researchers recorded HR for each subject every minute throughout the entire workout and RPE was assessed after each round. Additionally, an overall RPE was taken at the end of the workout session, while blood lactate concentration was tested at the beginning and upon completion of each CrossFit WOD.

Anecdotally, researchers noted that the workouts seemed very difficult for most of the subjects. “It didn’t matter their skill or fitness level, and it didn’t matter how long it took them to complete the workouts,” says Paige Babiash, M.S., “Each person was extremely exhausted at the end.”

Immediately following both testing sessions, the researchers crunched the data and plugged each subject’s HR results into his or her individual regression equations to predict VO2max for each WOD session (Table 1). 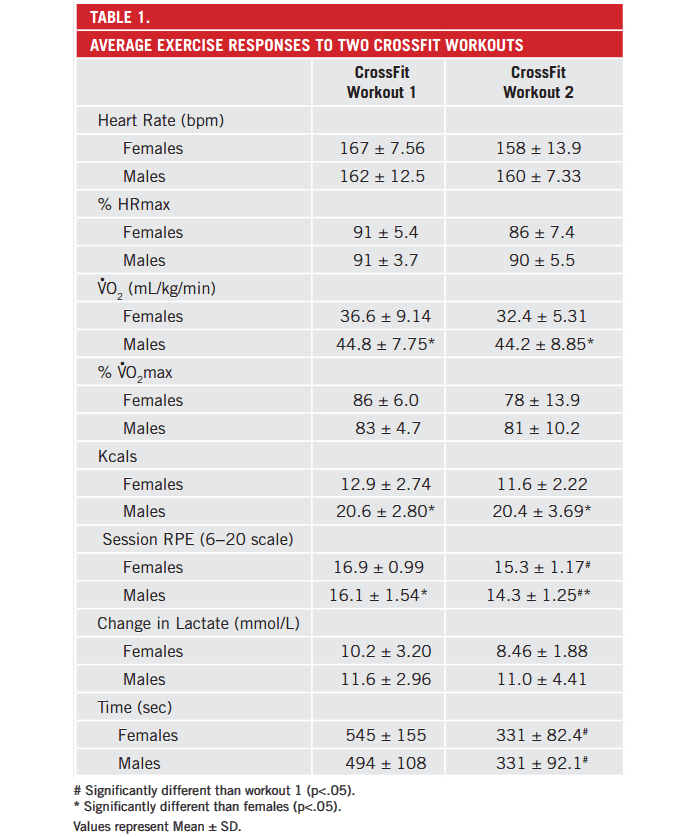 As for heart-rate responses, during the first round of both CrossFit workouts HRs were elevated to an average of 90 percent of maximum heart rate (HRmax), which was maintained throughout the remainder of the workout (Figure 1). Given that fitness industry guidelines suggest maintaining a training range of 64 percent to 94 percent of HRmax to improve cardio endurance, these CrossFit workouts both met the mark. 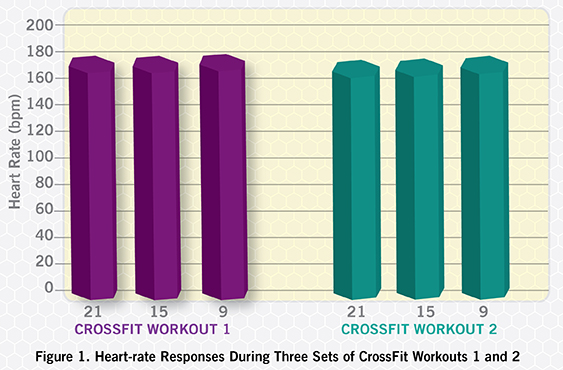 Similar to the HR responses, VO2 increased immediately during the first round of both workouts and increased slightly with subsequent rounds (Figure 2). Researchers found that VO2 averaged 80 percent of VO2max during both CrossFit workouts, indicating that the subjects were exercising well above their anaerobic thresholds. This is at the higher end of industry recommendations of maintaining 40 percent to 85 percent of VO2max to improve cardio endurance. 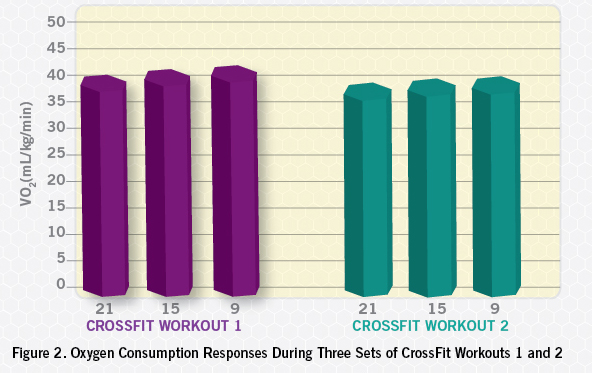 The vigorous intensity of a CrossFit workout was further illustrated by participants’ blood lactate values, which averaged 15.9 mmol/L for men and 12.4 mmol/L for women, both of which are well above the normal lactate threshold of 4 mmol/L. Across the board, subjects’ RPE values for both workouts were rated as “hard”  (Figure 3) and the RPEs during Donkey Kong (Workout 1) were markedly higher than those for Fran (Workout 2). 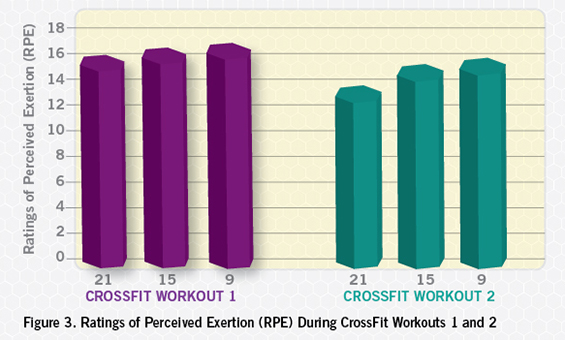 CrossFit works. For those who already do CrossFit regularly, this is surely no news flash. Based on the high intensity of the workouts tested, researchers conclude that CrossFit does a really good job of helping exercisers improve their aerobic fitness, while burning a fair number of calories in the process. And, like other high-intensity interval-training (HIIT) workouts, one can expect greater increases in aerobic capacity than what is seen with traditional aerobic training, which is typically performed well below an individual’s anaerobic threshold.

Working out more intensely for shorter periods means that exercisers can likely get good results with CrossFit while spending less time exercising, says Babiash. “The two workouts were completed in fewer than 12 minutes, not including the warm-up and cool-down. Yet, despite this short duration, subjects still burned an average of 115.8 calories,” she says. “Seeing the benefits in such a short amount of time is encouraging, especially if you have a busy lifestyle.”

Porcari agrees, but also notes that a pretty big asterisk should accompany all of his team’s findings. “You look at the intensity of CrossFit and it’s off the charts,” he says. “This is not the workout for a 45-year-old person with multiple cardiovascular risk factors. People absolutely need to be properly screened before beginning CrossFit.”

Beyond being potentially risky for many would-be exercisers, Porcari warns that the competitive nature and emphasis on completing CrossFit exercises as quickly as possible may well be a recipe for injury for some exercisers.

“The thing we’ve seen with a lot of these workouts is you go flat-out as fast as you can, but then your form falls apart. You really need to be technically correct with a lot of these exercises or else you’re going to get hurt,” says Porcari. “And it’s nice to be competitive with other CrossFitters, but at what point are you pushing yourself outside the realm of safety?”

Naturally, ACE recognizes that any exercise is better than none and that if CrossFit gets people up and working out regularly, then that’s success. That said, would-be CrossFitters and those who train them should pay close attention to the potential pitfalls outlined by Porcari to ensure that this current fitness craze doesn’t create more injured bodies than fit ones.