Let the Sunshine In (And Help Keep the Pounds Off) 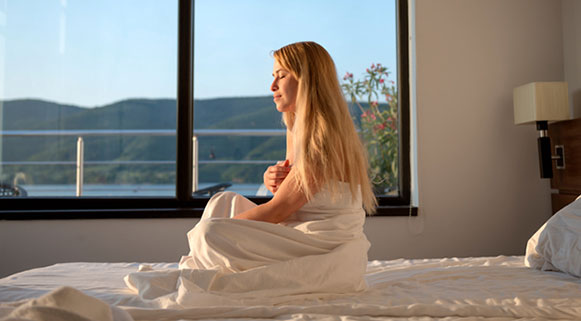 Researchers may have discovered a surprising new strategy for managing your weight: bright morning light.

A new Northwestern Medicine® study reports the timing, intensity and duration of your light exposure during the day is linked to your weight—the first time this has been shown.

It is worth noting that the influence of morning light exposure on body weight was independent of an individual’s physical-activity level, caloric intake, sleep timing, age or season. Researchers estimate that it accounted for about 20 percent of a person’s BMI.

“Light is the most potent agent to synchronize your internal body clock that regulates circadian rhythms, which in turn also regulate energy balance,” explains study senior author Phyllis C. Zee, M.D, a professor of neurology and director of the Northwestern Medicine Sleep and Circadian Rhythms Research Program. “The message is that you should get more bright light between 8 a.m. and noon.” About 20 to 30 minutes of morning light is enough to affect BMI.

About 20 to 30 minutes of morning light is enough to affect BMI.

“If a person doesn’t get sufficient light at the appropriate time of day, it could de-synchronize your internal body clock, which is known to alter metabolism and can lead to weight gain,” Zee said. The exact mechanism of how light affects body fat requires further research, she noted.

Many people do not get enough natural light in the morning, Zee says, because the American lifestyle is predominantly focused indoors. We also work in poorly lit environments, usually about 200 to 300 lux. In the study, 500 lux was “the magic number” or minimum threshold for having a lower BMI. Even on a cloudy day, outdoor light is more than 1,000 lux of brightness. It is difficult to achieve this light level with usual indoor lighting, the scientists noted.

Light May Be Next Frontier for Weight Loss

“Light is a modifiable factor with the potential to be used in weight-management programs,” Reid said. “Just like people are trying to get more sleep to help them lose weight, perhaps manipulating light is another way to lose weight.”

Giovanni Santostasi, co-lead author, a research fellow in neurology at Feinberg and a physicist by training, developed a new measure for the study that integrates the timing, duration and intensity of light exposure into a single number called mean light timing or MLiT.

He searched for a correlation between light exposure timing, duration or intensity in the study raw data, but none of those factors individually were associated with BMI. It was only when he began combining parameters, that he saw “the strong signal” when all three were examined together.

“I saw that what seemed to be most associated with body mass index was not just how much light you receive, but when you get it and for how long,” Santostasi said.

The study included 54 participants (26 males, 28 females), with an average age of 30. They wore a wrist actigraphy monitor that measured their light exposure and sleep parameters for seven days in normal-living conditions. Their caloric intake was determined from seven days of food logs.

The finding emphasizes the importance of “circadian health” in which exposure to light and dark is synchronized with your internal body clock. “We focus on how too much light at night is bad,” explains Zee. It’s also bad not to get enough light at the appropriate time during the day.”

“We focus on how too much light at night is bad,” explains Zee. It’s also bad not to get enough light at the appropriate time during the day.”

As part of a healthy lifestyle, people should be encouraged to get more appropriate exposure to light. Workplaces and schools should have windows. Employees should be encouraged to go outside for lunch or breaks, and indoor lighting should be improved in the school and workplace “This is something we could institute early on in our schools to prevent obesity on a larger scale,” Zee says.

While duration and timing of sleep was not linked to the results, “owl” chronotypes, who stay up later and sleep later, would be a population affected by later light exposure. But even “larks,” those who wake early, would be affected by lack of early light if they stayed inside in the morning.

While the study wasn’t designed to examine how light exposure affects body fat, previous research at Northwestern and elsewhere shows light plays a role in regulating metabolism, hunger and satiety.