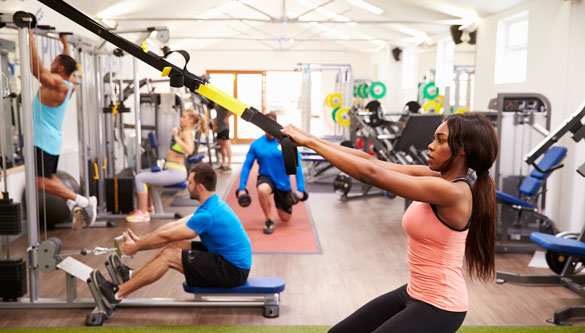 Perched on the dip bars between sets, I was afforded a panoramic view of the activities unfolding in my gym.

It was not a pretty sight. On this recent Monday morning, it was almost as if someone had decided to orchestrate a clinic on bad workout form and poor gym etiquette, for my benefit.

To my left, a man in ‘70s-era fitness gear (think tightly cinched weight belt, cut-off sweatshirt) sat in front of the curl machine, staring into space. Fifteen minutes later, when I was several exercises past dips, he hadn’t moved an inch...or, for that matter, a muscle.

Near him, a young lady had practically camped out at the leg press machine: She had her water bottle, towel and bag arrayed next to her—all that was missing was barbed wire and a guard tower to proclaim this machine as her turf and that everyone else should stay away.

In the cardio area to my right, a guy ran at top speed, his legs flailing away in a circular motion like a cartoon character while he grasped the console for dear life. A few treadmills over, a woman had her machine on maximum elevation, pointed skyward as she too clutched the console with both arms like a snowmobiler going uphill, out of control.

Meanwhile, weights were slammed and jerked; a junkyard-like pile of dumbbells grew on the floor near the racks because no one was bothering to put them back; benches and seats dripped with sweat from hirsute guys who couldn’t bother to clean them off when they were done.

In the midst of it all, an ocean of calm and focus in this maelstrom of gym-goers behaving badly, a personal trainer stood overseeing his client as she did lunges, correctly.

Of course, his focus was where it should be—on his client. But it made me think what, if anything, could be done about all this fitness malpractice around him? There was no staffer working the floor. The only other employee in the gym at that time was the reluctant receptionist at the front desk, cowering under her hoody and avoiding eye contact at all cost.

This raises a larger question: While there are certainly many who perform exercises on their own, safely and effectively, much of what I witnessed that morning is hardly unique to my gym. What is the responsibility (if any) for trainers in clubs and facilities everywhere? ACE Certified health and fitness professionals know how to guide their own clients through safe workouts, but to what extent are they obligated to be the gym police? What is their responsibility to correct bad form or to set inconsiderate exercisers straight?

“Fitness professionals have a responsibility to correct form for participants in their own classes or with their own training clients,” says Amanda Vogel, M.A., a fitness instructor and blogger at FitnessTestDrive.com. “Apart from that, it’s a judgment call.”

That judgment, and your call, however, will depend on several factors.

You’re a trainer with a client and a gym member comes up to you and complains that some member has been hogging the leg extension machine for half an hour.

Your response to this, according to master trainer Pete McCall, depends on your status in the gym. “If you’re an independent contractor, essentially renting space from the gym to train your clients, you have no role as an employee,” says McCall, who is also an adjunct professor in exercise science at Mesa College in San Diego. “So, in that case, it’s literally not your business.”

That doesn’t mean, however, you should just turn a blind eye. Directing the dissatisfied member to the club manager, McCall says, or speaking to management yourself would be an appropriate response.

It’s a different story if you are a staff trainer. “Probably in that scenario I would approach the person,” says legal expert Mark Nagel, a professor at the University of South Carolina who has also written the legal chapters in many of ACE’s professional training manuals. “When you’re acting as an independent contractor and you’re not a formal employee under the supervision of gym hierarchy, in most cases you’re not going to have a formal expectation to interject in the situation.” That’s a very different scenario, he adds, than if you show up to work for that gym regularly, you’re wearing the gym shirt, and you’re clearly identified as being with the gym. “In that case,” Nagel says, “you clearly have a duty to step in.”

Okay, but how? And in what situations?

Here again it depends. In the case of the machine-hogger, it might be wise to start (or ask club management to start) a document chain, to see if this is a chronic behavior. If so, then it might be time to have a chat with that member about gym etiquette.

Still, while it is certainly inconsiderate, it’s important to remember that the person who insists on doing five sets on the only leg extension machine is not putting him or herself or any other members in danger.

Are 200 Pounds of Iron About to Come Down on Someone’s Head?

Some years ago, when she was working as a trainer and assistant manager in a New York City health club, Liz Neporent, co-author of Fitness for Dummies, recalls hearing an incessant banging noise on the gym floor. She went searching for the source. “It was a tiny woman on a decline bench,” she says. “She was doing flyes with 5-pound weights. She’d bring her arms out all the way until they touched the floor, then bash them together at the top. Set after set. At the end of each set, she’d throw the weights on the floor, and they’d bounce. People were having to duck to get out of the way. Besides being a terrible way to do that exercise, it was very disruptive to the whole gym.”

Neporent could finally take it no longer. “I went over, scooped my arms under her, and I literally carried her over to a proper bench. I said, ‘You cannot do this for the following reasons...’” The woman, not surprisingly, looked shocked and angry. “I thought for a second, ‘what am I doing? This could be bad,’” continues Neporent. “But then she said, ‘You know what, you’re right? Show me the right way.’ And we became friends after that.’”

Neporent is not recommending that any trainer lay hands on a member, much less carry them around the gym. But she does believe a distinction should be made between bad gym etiquette and dangerous gym behavior. “For me, the question of whether to intervene in someone else’s workout is always on a case-by-case basis,” Neporent says. “But if something bad is imminent, then I would.”

Consider this time-honored scenario, familiar to anyone who has spent time in the free weight area: A lifter is about to perform a squat or bench press without a spotter and with a bar that’s groaning with 45-pound plates. The reps are shaky, limbs tremble and quiver. The lifter—let’s face it, most likely this is a male—is about to perform one more rep that you know they aren’t going to be able to do. Here, the decision isn’t necessarily to intervene and correct, it’s simply to save someone from serious injury—with perhaps a friendly reminder about the dangers of trying to lift too much weight without a spotter.

When McCall was a staff trainer at New York Sports Clubs, he taught the young trainers the right way to approach clients on the gym floor.

“When people work out, their adrenaline’s up,” he says. “If I say, ‘You’re doing something wrong,’ I’ve created a confrontation. People get defensive!” Instead he says, “The first thing I’d say is ‘Hi, how you doing? I’m Pete. What’s your name? If you have any questions, let me know.’ Or, ‘Can I show you another exercise that might be better for what you’re trying to do?’”

So when someone is throwing the weights down like they are hot potatoes, or hangs on to the treadmill as if it’s a lifeboat in shark-infested waters, and you feel that you should approach them—try to make it a positive. Choose your words carefully. Smile.

Even then, it’s risky. “If the member is doing an exercise in such a way that it’s less effective but it’s not necessarily putting them at risk for injury, it’s a judgment call as to whether to say anything,” says Vogel. “A new exerciser might be grateful for the guidance. Other members might find it insulting.”

Ultimately, though, it’s important to remember that your primary duty is to your client—especially if you’re an independent trainer. “We don’t take Hippocratic oaths as trainers,” Nagel says. “It’s not like doctors. You’re not morally obligated to rush in. I hate to say, from the pure legal side, unless you have a specific relationship as an employee of that facility, you probably do not have a duty to interfere on the other side of the gym, even when someone is doing something unsafe.” (That said, Nagel acknowledges that most trainers, regardless of their business relationship with a facility, would want to help maintain a safe environment.)

The Upside of Being the Form Police

There is another way to look at this: While someone who is using the four-way hip machine for neck exercises or slamming the weights after every set might not want to be told they’re wrong; while the guy at my gym zoning out on while performing biceps curls might not want to be told that his workout would be more effective if he picked up the pace—others would. In fact, they might be hungry, even desperate, for a little guidance.

“I find the majority of these things involve people new to the gym, and they’re literally sitting on the machine backwards or don’t know how to pull a pin out,” Neporent says. “A lot of times they’re grateful to be shown what to do.”

So could my nightmare scenario—a gym full of people who didn’t know what they were doing—represent an opportunity for a trainer? “Absolutely, if the trainer approaches them the right way,” says Stefanie Lujan, content project manager at ACE and a long-time fitness professional. “A lot of people who go to the gym think trainers are going to be mean and yell at them. You can approach a person in a nice way, with empathy.”

Spend a few minutes with these people, Lujan recommends, and give them some pointers. You might even offer a free session. “That way you can give them your undivided attention, and maybe they become a client.”

Most people would call that a win-win, don’t you think?

Make sure you’re covering all your legal bases with these additional resources from the American Council on Exercise:

John Hanc is a long-time contributor and columnist for Newsday, a contributing editor for Runner's World and a frequent contributor to The New York Times. He is the author of 14 books, the latest of which is The Ultra Mindset: An Endurance Champion's 8 Core Principals for Success in Business, Sports, and Life (Da Capo, April 2015), which he co-authored with ultra-distance running champion Travis Macy.