Music Tames (or Revs Up) the Savage Exercising Beast

There's no doubt that music is powerful—in some cases, it has the ability to calm our senses and put us at ease; at other times, it serves to rev us up. For those who listen to music while working out, it can even make us push harder in our fitness routine than we would have without it. With all the modern technologies, including the ubiquitous iPod, which gives you access to an entire music library in the palm of your hand, using music during your workout has never been easier. And, it turns out, those who prefer to work out while listening to music may actually have an advantage. Studies show that music may aid almost every aspect of our workout, including pacing, ratings of perceived exertion (RPE), explosiveness of movement, warm-up and lactate clearance during recovery. In fact, simply telling someone that music increases their enjoyment of exercise will enhance their enjoyment of exercise!

Get with the Beat!

According to a recent study, discussed in this New York Times article, our step frequency often changes with speed so that our bodies operate at maximum efficiency. Dr. Max Donelan, a professor at Simon Fraser University and co-author in the study, tried changing visual cues with projections on a curtain around a treadmill, and found that the step frequency briefly changed, only to quickly settle back to the normal frequency. The ONLY factor that helped exercisers maintain a fast step frequency was faster tempo music. Based on his findings, Dr. Donelan launched an iPhone app called Cruise Control that chooses the songs from your music library featuring a specified cadence. Another website, www.clickmix.com, does something similar, but from a song-selection standpoint, allowing the user to search for songs based on beats per minute and run time. 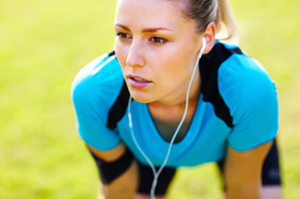 In an ACE-sponsored study, researchers Dr. Carl Foster and Dr. John Porcari of the University of Wisconsin, La Crosse, reviewed the effects of music on exercise intensity and reinforced the idea that people will not only exercise to the beat of the drum they are listening to, they also enjoy exercise more, perceive it to be less taxing and often exercise harder as a result. In their review, the researchers quoted Costas Karageorghis, Ph.D., from the Brunel University School of Sport and Education, who is a leading authority on music and exercise. "Music is like a legal drug for athletes," wrote Karageorghis. "…it can reduce the perception of effort significantly and increase endurance by as much as 15 percent." In his research, Karageorghis found three possible mechanisms for this improved exercise performance:

Foster and Porcari have supervised several studies investigating the effect of music on intensity and generally find that the faster the tempo, the higher the individual's intensity and the more aroused they will become. "All things being equal," says Foster, "I think the stronger and more obvious the beat, the more likely you will follow it." Many experts in running claim an efficient cadence for almost all runners is between 170 and 180 steps per minute, which is pretty fast. Foster and Porcari believe the tempo or beats per minute should correspond to the heart’s beats per minute—running should have a tempo of 147-169 bpm, cycling should be set at 135-170 bpm, and power walking should be lower and more accurately set at 137-139 bpm.

It is common to see athletes listening to music on their headphones before a competition. In fact, Olympic swimmers and track athletes are famous for literally "tuning out the world" with their music. It has been shown to improve peak power output when delivered during the warm-up for the supramaximal Wingate test. Surprisingly, other variables such as heart rate, fatigue index or RPE did not show any difference (Jarraya et al., 2012). In another study from an Italian university, the researchers were testing if an arousal auditory stimulus could improve bench-press power. Researchers found that an auditory stimulus significantly improved power output (Murgia et al., 2012). Finally, a study on self-selected music (SSM) effects on explosive strength in a bench press and squat jump found SSM did not improve bench-press performance or increase jump height. However, it did improve the rate of force and take-off velocity. The RPE and mood scores for vigor, tension and fatigue were greater in the music condition. The researchers concluded that listening to SSM might be beneficial for acute power performance (Biagini et al., 2012).

In a study from Brazil, time to finish, heart rate, RPE and mood state were not significantly different when music was delivered before or during the 5km cycling time trial. However, the RPE may be slightly lower with music (Bigliassi et al., 2012). The effect of music was even tested on recovery from intense exercise. Music proved to be beneficial in the number of steps the person would take in recovering and this was associated with a faster lactate clearance and lower RPE. Like the other studies, there was no difference in mean heart rate during the recovery. A study by Whitehead and Knight (2012) found that simply creating an expectancy of enjoyment for exercise with music is all it takes to get people to actually enjoy the exercise experience more. Thus, the placebo effect may be very real with music and exercise.

In conclusion, music is beneficial for most of the psychological aspects of exercise and may be beneficial for short-term, power activities. While endurance performance is not enhanced, recovery and possibly step frequency may be increased with the right kind of music. The primary benefit of music seems to be that it helps us endure the pain and discomfort associated with exercise. Personally, I never listened to music for 25 years of working out and yet now I can hardly go running without it!

Whitehead, J.R. and Knight, A. (2012). Music and exercise: Does creating an expectancy of enjoyment increase reported enjoyment. Pamukkale Journal of Sport Sciences, 3, 2, 63-77.