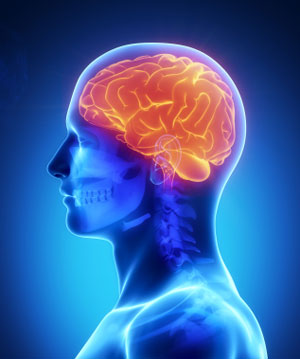 Most people know that exercise is good for the brain, but to know why that's important you need answers to two critical questions:

Major degenerative diseases in the brain are all caused by one thing – mitochondrial decay in the brain.  Scientists classify degenerative brain diseases differently based on their symptoms and which region of the brain region they affect, but they all have the same cause.  Why is this a good thing?  Because it means that what‘s good for preventing one disease is also good for preventing others.  And because the primary factors for determining your susceptibility to brain disease is not genetics.

And surprisingly, genetics is not your biggest determining factor.  Even if you have a defective gene, something in the environment has to activate it.  Michael J. Fox’s Parkinson’s was considered genetic until three other people who worked at the same Canadian TV studio in the 1970s also developed it.

Your brain uses 20% of the calories you consume.  As a result, it has a large number of mitochondria and experiences a by-product of energy production called free-radical production.  Free-radical injury to the mitochondria progressively reduces its ability make ATP.

The worst damage to proteins occurs at the inner membrane of the mitochondrion.  In harnessing the light (all food is essentially light turned into edible form) to give us energy, the mitochondria inevitability suffer damage by free radicals.

These are the four main processes of mitochondrial decay:

What Can You Do About It?

Protecting your mitochondria is your best chance at preventing brain decay. Here are three main methods you can use:

Aromatic spices such as turmeric, cinnamon, ginger, cloves and red pepper (cayenne) are all strong anti-inflammatories.  And of course, managing stress plays a large role in managing inflammation.  Most modern stressors don’t require a physical response.  Instead of fight-or-flight, it’s stew-and-chew.  We stress over our retirement, our kids’ schooling, our careers, traffic – none of which requires a physical response.  But the brain doesn’t know this – it interprets stress as a fight-or-flight event, so we often end up eating more when stressed. The downside of that is stress hormones that get pumped out never get used up by physical activity – that’s where exercise comes in!

Keeping your brain buff doesn’t just mean exercising; it means participating in the right type of exercise, which means more than just walking.  Physical activity boosts a protein (BDNF or brain-derived neurotrophic factor) that protects neurons from damage.  If we have enough BDNF flowing around our brains, we can handle any amount of stress.

Greenough worked on an experiment in which running rats were compared to others that were taught complex motor skills, such as walking across balance beams, unstable objects, and elastic rope ladders.  After two weeks of training, the acrobatic rats had a 35% increase of BDNF in the cerebellum, whereas running rats had none.

The point is that your workout regimen has to include skill acquisition and aerobic exercise.

Essentially, exercise has to stimulate the senses, engage you and perhaps be a little bit “scary.”  Use simple math problems during exercises (even goes left, odd goes right, etc.), bounce a tennis ball around or kick a pebble back and forth while going for a walk, use random patterns with medicine ball tosses – the ideas are limitless.  Insert some skill acquisition and cognitive processing into exercise and you’ll greatly enhance the brain benefits, and get the brain one step closer to buff!

Interested in learning more? Discover the role exercise plays in recovering from psychological disorders in this online course. You can also learn fun drills your clients and students will love, and learn even more about protecting your brain live with Jonathan at his session “Buff Brain, Brilliant Body!” at the AFPA conference in Ocean City, Md., from April 26-28, 2012, along with other great ACE workshops. Hope to see you there!