by Natalie Digate Muth
on October 14, 2011
Filter By Category 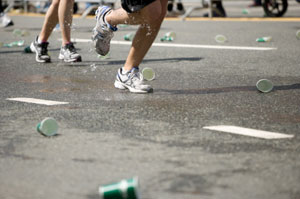 Last weekend, William Caviness, a 35-year-old North Carolina man collapsed 500 yards from the finish line at the Chicago Marathon and was pronounced death soon after.

An experienced marathoner and firefighter described as “the picture of health,” his sudden death is now the sixth in Chicago Marathon’s history in the past decade and half. This marathon, however, isn’t the only event plagued by tragedy and all raise safety concerns of endurance challenges.

While the autopsy on Caviness was inconclusive, some experts speculate that, in this case, cardiac arrest is to blame. Underlying heart conditions, dehydration, and over-hydration (hyponatremia) most often are the causes of life-ending races in young athletes.

As a result, serious attention to hydration on race day can prevent a tragic outcome on what is supposed to be a celebration of a commitment to physical activity and a remarkable feat of mental toughness.

Sadly, it turns out that not many runners are paying serious attention to hydration. A New York Times piece that ran last week highlighted two studies, which showed that a whopping 65 percent of the athletes studied were “not at all” concerned about keeping themselves hydrated. This nonchalance comes at a cost.

Drinking too little can lead to dehydration — a scary condition exercisers have been cautioned against in every text, handout and presentation on fluid replacement. Dehydration results from a sweat rate that is beyond fluid replenishment.

Several factors increase the likelihood of dehydration, by either increasing sweat rate or decreasing fluid intake:

Dehydration, along with high exercise intensity, hot and humid environmental conditions, poor fitness level, incomplete heat acclimatization, and a variety of other factors can all raise body temperature and together lead to heat stroke.

While dehydration is a serious concern, athletes should also be aware that drinking too much — out of fear of not drinking enough — could lead to hyponatremia, a less well known and understood, but equally frightening condition characterized by a low blood sodium level.

Exertional hyponatremia results from excessive intake of low-sodium fluids during prolonged endurance activities -- that is, drinking a greater volume of fluid than the volume lost in sweat--and possibly, to a lesser extent, from inappropriate fluid retention.

A study of 488 Boston Marathon runners published in the New England Journal of Medicine found that 13% (22% of women and 8% of men) had hyponatremia, and 0.6% had critical hyponatremia, at the end of the race.

Runners with hyponatremia were more likely to have low body mass index, consume fluids at every mile (and more than 3 liters total throughout the race), finish the race in more than 4 hours, and gain weight during the run. The greatest predictor of hyponatremia was weight gain, which researchers attributed to excessive fluid intake.

But hyponatremia is not limited to runners. Anyone exercising at a low to moderate intensity for an extended period of time (generally 4 hours or more) while consuming too much water can be at risk.

The goal of fluid intake during exercise is to prevent performance-diminishing or health-altering effects from dehydration or hyponatremia. Here’s how:

At the end of the day, the human body is well-equipped to withstand dramatic variations in fluid intake during exercise and at rest with little or no detrimental health effects. For this reason, most recreational exercisers will never suffer from serious hyponatremia or dehydration and should not be alarmed. It is under extreme situations of prolonged or very high intensity exercise in excessive heat and humidity that risk elevates. And even then, if athletes replenish sweat loss with equal amounts of fluid, hydration problems can be avoided and performance optimized. The key to a safe and successful finish is a few ounces of education and prevention.