5 Exercises Trainers Should Never Do

No matter how many years I spend in fitness, I still see new and surprising things happening in people’s workouts. Some are great new additions, because the ways humans can safely and successfully move is highly varied and what is “correct” is broader than we previously thought. However, almost every day you will see things at the opposite end of the spectrum. These are exercises that fall into the “just because you can do it, doesn’t mean you should” category.

What follows are some exercises in that latter category—movements that, in general, aren’t a good idea. I’ve tried to identify a larger principle that these movements violate so that the perspective is not limited to just these movements. Instead, we can see how they work against something fundamental about human movement that we should respect when it comes to exercise choice.

In general, I don’t subscribe to extreme views and absolutes, as they are usually reflective of an unsophisticated view of reality. Thus, it’s important to emphasize that the exercises used here are not being held up as the five worst exercises. In fact, there are many other potential choices that could be used as examples. The exercises used here simply illustrate how a fundamental principle is violated.

A final note before we dive in: With every terrible exercise, there will always be some outlier who has been doing it for years and is “fine.” Good for that individual. As someone who presents fitness to the masses, I don’t get the luxury of anecdotal evidence and single data points to justify what is and isn’t sensible. “It works for me” isn’t a principle and is a flimsy rationale on which to base exercises for the masses. Leaders must think more deeply about recommendations.

Trainers teach exercise based on foundational principles. In light of this, the exercises that follow are unwise because they violate one of the following:

Here are five exercises trainers should not have their clients do; what each movement violates is shown in parentheses after each one.

Dumbbells provide resistance from gravity—vertically. Punching is done horizontally. When resistance training, the resistance should oppose the movement directly. Far more effort is expended to keep the dumbbell from falling to the earth than is spent pushing the dumbbell forward. Adding the dumbbell changes the movement entirely—and not for the better. It adds unacceptable stress to the shoulder joint, while altering the muscle-firing pattern in undesirable ways. This makes about as much sense as sprinting with ankle weights on.

I included this exercise because I saw this for the first time during the week I was writing this article. Unfortunately, it’s another in an endless stream of head-scratching movements played out over and over in the theater of fitness. Moving the crunch to a decline makes it harder. Using the upper body to assist makes it easier. Adding an upper-body assist to a standard, horizontal-crunch movement is a sensible regression. Adding a decline to a crunch without an upper-body assist is a sensible progression. Putting both together makes no sense.

Crunches have been unfairly maligned, but the partner leg throw, an all-too-common exercise, presents far more risk than crunches done properly at a reasonable volume. With this terrible exercise, it often becomes a battle of wills with the standing partner throwing the legs of the exercising partner as hard as possible. However, the small muscles between each vertebrae can’t stand up to this, so the powerful hip flexors typically engage isometrically, resulting in aggressive and uncontrolled forward flexion of the hip and hyperextension of the low back, putting the lumbar spine at far greater risk than a typical crunch.

Whatever meager benefit is gained from these exercises, the risk is huge. Plus, you can get the same rewards from a variety of other safer versions. During behind the neck presses and pulldowns, the arms typically internally rotate, causing a loss of vertical alignment of the upper arm under the resistance. As for stacking weight plates on a plyo box and jumping on them—well, that’s kind of an obvious one. Any exercise where the risk is massive and the reward is either questionable or available from safer alternatives is one that a trainer should never do. 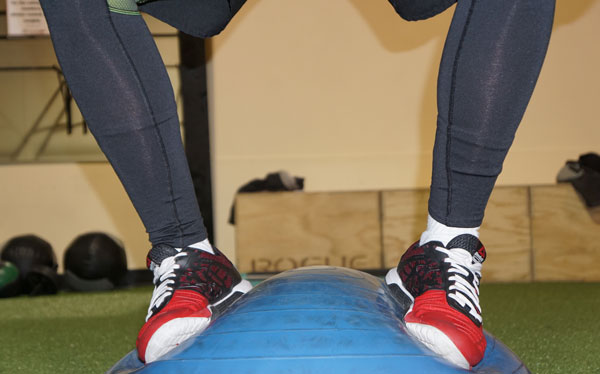 One look at the feet and knees of anyone squatting on top of a stability ball clearly shows why it’s foolish. We don’t align our lower joints that way when squatting in life. The only time we do it is when standing on a curved, soft, air-filled surface. The relative position and relationship of the foot, knee and hip must be respected when performing any squat variation. Respecting those joint relationships is harmony; disrespecting them promotes disaster. Single-leg squats on a kettlebell? Uh, no. Too much risk, with no additional reward over just doing the same movement on the floor.

Many ill-advised movements are borne out of a desperate need for attention and are rarely done alone—they are typically done in full gyms or for a YouTube video. In other words, they are performed for an audience. But many others just keep surfacing because people have seen other people doing them enough times over the years that they assume they are good ideas. Trainers use and develop exercises based on sound principles of the physics of movement and of progression. Anything that runs against those concepts reflects a thoughtless, uncritical approach to exercise and presents the potential for harm.