3 Health Lies We Tell Ourselves 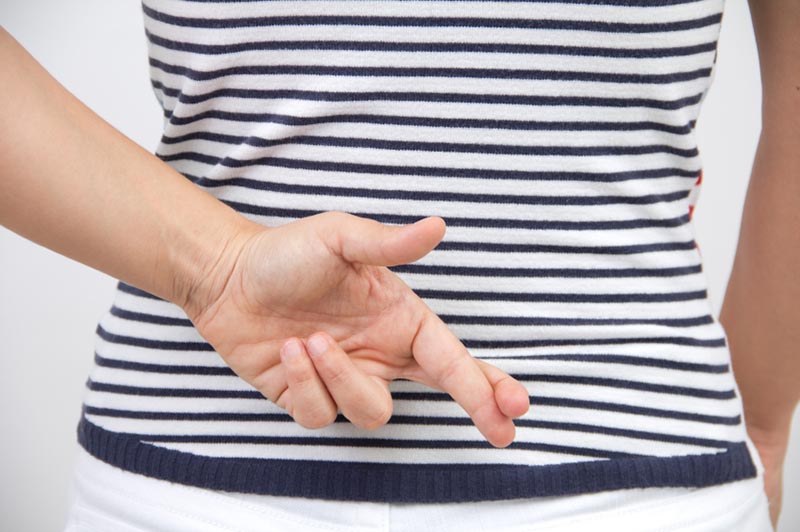 Self-delusion is something we all do. And it’s not always a bad thing as it can help us cope with some of life’s truly challenging and trying times by convincing us to press on, even when facing insurmountable odds. However, when we do this with physical activity and nutrition, we can unknowingly erode our health. Here are three health lies many of us tell ourselves to feel better, but we are likely doing ourselves more harm than good.

I worked out really hard.

You may have, but most likely not. And even if you did, you believe you worked out harder than you really did. In Kidding Ourselves, Pulitzer-winning writer Joseph Hallinan notes research where people fitted with accelerometers found out that both men and women dramatically overestimate the amount of exercise they get. There are two downsides to this. First, you fail to derive the health benefits of the more challenging workout you believe you had. Second, and more powerfully, this often leads to nutrition choices to reward ourselves for the effort. Unfortunately, giving ourselves a free pass to poor food choices after “deserving” a treat because we exercised means we will be more likely to make a far worse choice due to a phenomenon called “moral licensing.”

In the Willpower Instinct, Kelly McGonigal explains moral licensing like this: “When you do something good, you feel good about yourself. This means you’re more likely to trust your impulses, which often means giving yourself permission to do something bad. The worst part of moral licensing is not just its questionable logic; the problem is how it tricks us into acting against our own best interests. It convinces us that self-sabotaging behavior is a well-earned ‘treat.’ This is lunacy, but it’s an incredibly powerful trick of a mind that turns your wants into shoulds.”

Interestingly, a truly hard workout is a physical challenge to the body that actually warrants better nutrition, not worse, to provide the proper nutrients to recover from the workout.

The favorite rallying cry of defiantly and often visibly unhealthy people, the idea of “everything in moderation” is delusional because of how people define “moderation.” Having any type of junk food once a day isn’t moderation. That’s a habit. That’s your lifestyle. The other flaw is in people who eat ice cream once a week, but also eat a doughnut once a week and fries once a week, etc. Because each item is eaten once a week, they erroneously interpret this as moderation. Nope.

There’s this relatively modern concept of “superfoods,” but there’s really no such thing. For most of human history, there was just food. There have been no newly discovered foods that act like nutritional superheroes in our bodies. Yes, a blueberry is healthy. But it is healthy in the standard way our bodies have come to expect and in ways that the blueberry has always been healthy. Healthy food is our normal. It’s not super; it is what is expected. And on the junk food side of things, there are countless very new, sometimes very distorted and freaky foods that do act kind of like “supervillains” in our bodies.

Think of it like this: Food is like a world in which there are no superheroes, just a lot of very good but ordinary people, but a lot of supervillains as well. It takes a lot of work and time by a lot of good, ordinary people to fight the destruction caused by just a few supervillains. Everything in the healthy category is really just normal, not a superfood. But in the unhealthy food category, most foods have significant deleterious effects that are not solved simply by eating healthy food at the next meal.

The major problem is that there are all kinds of weird “food” products (they might be edible, but they aren’t really food) with distorted chemicals, sugars and fats that can disrupt your physiology. And the resulting dietary imbalances rapidly generate inflammation and a kind of hormonal static that can take weeks or months to clear.

A little alcohol is healthy.

There once was a time when alcohol was considered safer to drink than water. This was in our seafaring days and the antiseptic properties of alcohol made it a safer choice on long ocean voyages than water, which would frequently be contaminated.

Why do so many people believe that a little alcohol is healthy? This well-funded message has been spread aggressively for many years as the alcoholic beverage industries have over-promoted studies showing that alcohol is healthful. However, researchers at the University of Victoria in British Columbia reviewed 54 studies and found that only seven of those studies corrected their non-drinking population for people who had been told to stop drinking for health reasons (Addiction Research and Theory, April 2006). Many people don’t drink because they have had to stop for various medical reasons, and this distorts the data. When your pool of non-drinkers includes many people with diseases necessitating cessation of drinking, your numbers aren’t what they seem.

Drinking alcohol regularly is already proven to be associated with high blood pressure, heart failure, sudden death and stroke. More recent data show that consuming up to one alcoholic drink a day is associated with increased risk for cancer of the mouth and throat, esophagus and breast (Annals of Oncology, Feb 2013; 24(2):301-308). In 2007, the World Health Organization's International Agency for Research on Cancer (IARC) found that drinking alcohol is associated with cancers of the mouth, pharynx, larynx, esophagus, liver, colon, rectum and female breast.

Alcohol is particularly bad for your liver and brain. When the liver sees alcohol, it is seen as a “priority,” meaning that the liver stops everything else it is doing to handle it. Melissa Layne, assistant professor of Health, Physical Education and Recreation at the University of North Georgia, compares this to what happens if the post office gets an anthrax letter. All other functions and priorities shift toward handling the crisis. She adds that if “your liver could talk, it would call alcohol egocentric, demanding and disruptive.” One major job for the liver is to make vitamin D from hormones. Send some alcohol to the liver, and vitamin D production halts.

In the brain, alcohol causes working brain tissue to shrink, even from moderate alcohol intake. Brain cell loss and compromised functioning of the protective blood-brain barrier are also related to alcohol consumption. This drop in protection can cause free radical damage of cell membranes negatively affecting mitochondrial function, damaging mitochondrial DNA and causing inflammation. And with no nerve endings in your brain, you don’t feel the inflammation like you feel a sprained ankle. Free radical damage to mitochondrial DNA and inflammation in the brain are a major cause of neurodegenerative diseases like Alzheimer’s and Parkinson’s, so any lifestyle choice that increases them can hardly be considered healthy.

But what about resveratrol? It’s a powerful antioxidant that crosses the blood-brain barrier and is found in grapes, cocoa, dark chocolate and a few other foods. If you seek those benefits, then eat those foods. If you’re drinking wine to get your resveratrol, that makes no sense. Drink wine because you enjoy wine. It’s like eating a super sweet chocolate bar because it has a little dark chocolate in it. If you want the health benefits of a food (like grapes or oranges), then eat that food. Don’t drink it.

If you enjoy an occasional alcoholic drink, then carry on, but do so with both eyes open and with a realistic understanding of what it is. The illusion of health attached to alcohol consumption results in people consuming more than they probably should and having a nightly glass of wine because it’s “healthy,” and this is unwise. Enjoy alcohol occasionally and you’ll be fine. But to drink it for health benefits is folly. The negatives of alcohol consumption far outweigh the positives on a physiological level.