4 Drills That Will Improve Your Agility

Agility is the ability to move quickly in any direction, particularly as you stop abruptly from moving on one path to start again on a different one. When agility skills are mastered, you can accurately and rapidly change course, which involves the application of acceleration, stabilization and deceleration, all at the appropriate times. Agility training is commonplace in athletic competition preparation. For example, a basketball player demonstrates agility when he sprints down the court at a high speed (acceleration), quickly brakes (deceleration and stabilization), and cuts to the left and jumps (acceleration) to make the shot. As described in this example, the ability to develop and harness speed is also a component of agility mastery. Hence, athletes often devote time to speed training, which incorporates moving rapidly from one point to another in the shortest timeframe possible.

It’s easy to conceptualize why athletes would spend time on this type of training, but is a focus on agility important for non-athletes as well? The answer is yes, and it stems from the need to perform daily functions with ease and confidence. While most of us navigate through our days in a predictable manner, there are times when we may need to regain balance (e.g., after stepping off of an unseen curb) or move quickly in an unpredictable pattern (e.g., dodging traffic). Adding agility training to your exercise program may help you successfully and confidently respond and adapt in unpredictable situations.

In a practical sense, I like to add agility drills to my clients’ training programs to help them develop better balance, coordination and quickness. Another significant benefit is that training for agility brings a sense of fun and playfulness to a workout, which I find especially important for continued motivation. Agility training techniques include side-stepping, turning and shuttle running (i.e., forward and backward running to and from designated markers). So, how agile is your client? To find out, try the following drills at the beginning of your client’s next workout, immediately after the warm-up. Each drill takes about 20 seconds or less to perform. Take about 20 seconds of rest between attempts. Feel free to have your clients perform the drills more than once as they learn the patterns and gradually work up to faster speeds. Add agility drills to your clients’ workouts twice a week.

Note: Speed and explosiveness are components of advanced drills. Be sure to gradually work your clients up to full speed by practicing drills that are initially performed at submaximal speed to ensure proper technique. In addition, agility training should be avoided if your client currently has a lower-extremity injury or instability, as abrupt stopping and turning pose a risk to unstable joints.

Set two cones 5 to 10 yards apart. Facing the same direction the entire time, side step while shuffling between the cones, touching each cone with the outside hand. The goal is to stop at the cone and return without letting the feet cross over the area marked by the cones. Count the number of times your client can shuffle back and forth in 20 seconds.

Set three cones in a line, 5 yards apart. Straddle the center cone. To start, turn and run right (5 yards) to touch the right cone with the outside hand. Then turn and run left to the far left cone (10 yards), touching it with the outside hand. Turn again and run through the middle cone (5 yards). Have your client attempt this drill three times, trying to decrease his or her time.

Keep the cones in the same configuration as the shuttle drill above. Start behind the far right cone. Run a figure-8 pattern through the cones as many times as possible in 20 seconds. 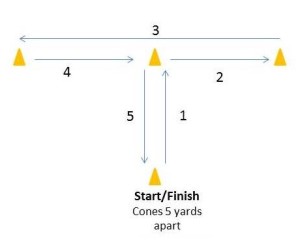