How to Correct Form With Reactive Neuromuscular Training (RNT)

by Elizabeth Kovar
on December 08, 2014
Filter By Category

When correcting improper form, a personal trainer will usually verbally and/or visually cue the client to achieve correct form. Although the client may mentally understand the concept, it is possible for the physical body to continuously execute improper form, which may lead to frustration for both trainer and client. In this situation, when movement quality is poor, the client would benefit from reactive neuromuscular training (RNT).

RNT uses outside resistance to neurologically turn on an automatic response. It is often seen as a “quick fix” to faulty movement patterns without the use overcueing techniques. RNT exercises are designed to improve functional stability and enhance motor-control skills with an automatic response. In simple terms, RNT benefits subconscious, flawed movements by employing instinct, as the body must resist—and react to—the applied force.

The goals of RNT include improved joint stability and neuromuscular coordination, and enhanced kinesthetic and proprioceptive awareness. In addition, RNT training encourages co-contraction of agonist and antagonist muscles. Overall, RNT training bridges the gap so clients can progress to the next stages of training, whether that means returning to athletic pursuits or improving their ability to perform activities of daily living.

Common outside resistance tools include resistance bands, stability balls, foam rolls and a trainer’s touch. Trainers can include the following exercises in a client’s program design to benefit faulty movements based on poor performance or incorrect form demonstrated during movement screens. 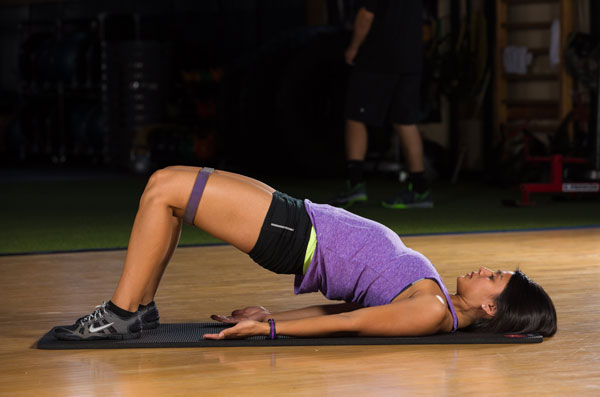 How to Perform: Have the client lie on the ground with feet flat to the floor and place a strap around the knees. Instruct the client to move up and down from a hip bridge as you apply outward pressure on the strap. 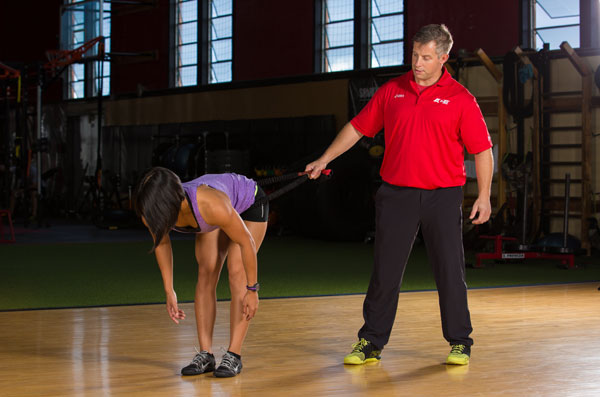 Focus: Correcting hip hinges that look similar to a squat or a thrusting hip hinge that is initiated from the upper body rather than the pelvis; teaching how to hinge from the pelvis activates core stabilization and fires the posterior chain

How to Perform: Have the client stand upright and place a resistance band around his or her waist. Stand behind the client and apply resistance on the band. Instruct the client to activate the core and resist the band by hinging from the hips, keeping a soft bend at the knees. 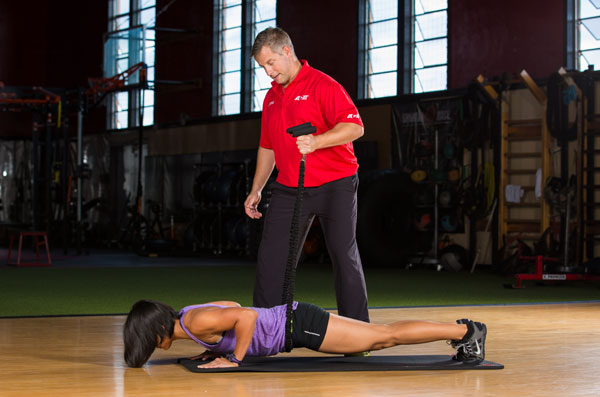 Focus: Counteracting slacked hips or leading with the hips during a pushup; increasing core stabilization and strength by utilizing the upper body muscles rather than momentum

How to Perform: Have the client assume a push-up position and place a resistance band around his or her waist. Hold the band directly upward and stand on either side of the client. Maintain resistance as the client performs push-ups. 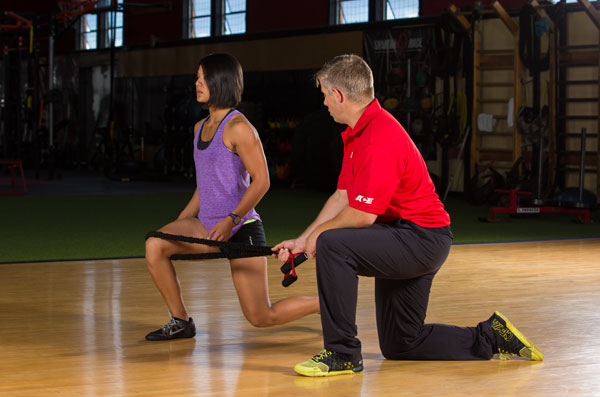 Focus: Eliminating caving in of the knee (adduction); strengthening the gluteals and external rotators

How to Perform: Have the client assume a lunge position and place a resistance band around the outside of his or her lower quadriceps, slightly about the kneecap. Stand opposite the client’s front leg and apply resistance on the band so the client’s leg resists and aligns back to the traditional lunging motion.