by Jessica Matthews
on October 28, 2009
Filter By Category 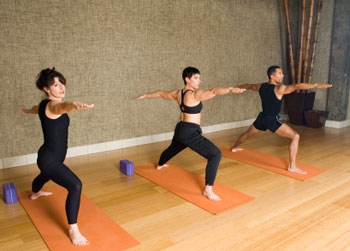 Yoga has been practiced for thousands of years, so one would assume it must provide some great benefits, right? Well over the last decade as the interest and demand for mind-body programming has continued to increase, so has the number of research studies conducted to examine the specific benefits that yoga has to offer.

Yoga does a body good.

Studies have shown that regular yoga practice can improve muscular strength and endurance, flexibility and balance, which are often overlooked aspects of fitness. Yoga has also been shown to decrease the risk factors for chronic diseases, such as diabetes mellitus and cardiovascular disease, and also is effective in reducing chronic low-back pain, an issue which will affect nearly 80% of us at some point during our lifetime.

In addition to the numerous physiological benefits, yoga also provides an assortment of emotional and psychology benefits. Yoga by definition means “union,” in essence the connection between body, mind and spirit. Yoga has been shown to reduce stress, promote relaxation, improve mood, and increase subjective well-being. Available research also indicates that stress-related diseases, such as hypertension, pain, cardiovascular disease insulin resistance, and depression are beneficially affected by regular participation in mindful exercise, such as yoga.

What’s best for me?

There are a number of different styles of yoga, so it is important to be familiar with the specifics of each to ensure that you select a style that is in lie with your unique health and fitness goals, as well as your particular needs. Below are just a few examples of the different styles of yoga currently being offered (this is by no means a comprehensive list)-

Hatha- This term, which can encompasses a variety of physical types of yoga, is typically reflective of gentle, slower-paced yoga classes which are great for beginners as well as for those seeking a solid foundational understanding of basic yoga postures.

Vinyasa- Much like Hatha, this term may also be used to describe a variety of class styles. The term vinyasa in its Sanskrit roots means “to place in a special way,” as this style of yoga is comprised of sequenced yoga postures connected with the breath to create flow throughout the practice.

Ashtanga- Also known as “power yoga” this physically demanding practice is a great option for those looking for a more serious workout.

Bikram- Also referred to as “hot yoga” this practice is comprised of a sequence of 26 asanas (yoga poses) that are performed in a heated room. Bikram classes are typically 90-minutes in length.

Iyengar- This style of yoga focuses on bodily alignment, and encourages the use of props to facilitate precise body position within each pose. Emphasis is placed on holding the postures longer (for several breaths) as opposed to quickly flowing from one posture to another.

Is there anything yoga can’t do?

While the research regarding the physical benefits of yoga is in impressive, it is important to note that yoga was traditionally not designed to be a “one-stop shop” in regards to fitness. Research has supported this notion by studying and identifying the lack of aerobic activity that yoga provides. A study conducted by Poraci and Spilde showed that that a 50-minute Hatha yoga practice provides no substantial aerobic benefit, as the number of calories subjects burned was comparable to that of a slow walk. Vinyasa-style or Asthanga yoga (often referred to as “power yoga”) on the other hand was shown to provide a mild aerobic workout, as a 50-minute practice burned 344 calories on average among participants.

These findings are not intended to deter individuals from integrating yoga into their current fitness program by any means. Instead, these findings help to shift the focus back to the numerous valuable benefits that yoga was intended to and does provide, which often times are the critical components that individual fitness routines are lacking.

I can easily start an exercise program, but lose motivation long-term. What can help?